Is this the future of food?

The most thought-provoking exhibition of 2019 may well be the V&A's FOOD: Bigger than the Plate. This examines the future of what we eat - and our planet - with a witty and sometimes provocative look at design, production and alternative sustenance. There's no preaching, just lots of ideas, and visitors can see several exhibits actually growing in the gallery space. 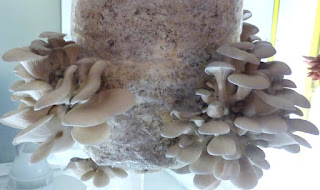 What can you do with used coffee grounds, other than throw them away? Well, GroCycle has created an Urban Mushroom Farm using coffee waste from the museum's Benugo cafe and turned them into compost in which edible Oyster mushrooms can grow (above). When these are harvested, they'll be returned to the cafe for use in selected dishes. 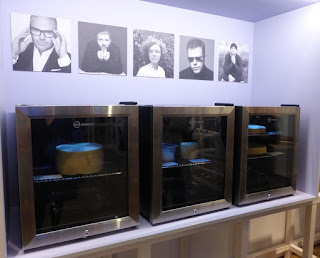 There are also some chilled display cabinets with cheeses created from microbes harvested from the bodies of celebrities. There was no mention of these going back to the cafe – and quite honestly, I wouldn’t rush to try a Comté cheese created with the help of samples from Heston Blumenthal’s nostrils and pubic hair – but maybe in the future, we’ll be grateful for such delicacies. 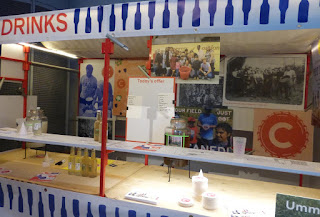 Local produce and initiatives that reconnect consumers and producers are hot topics at the moment. An east London community enterprise, Company Drinks, draws on the area's tradition of going hop picking to bring people from Barking and Dagenham together to pick and process ingredients for drinks. It was founded by Kathrin Bohm of Myvillages in 2014 and since then, more than 36,000 people have got involved. Some of their produce is available to sample. The cordial I tried was a refreshing infusion of kale, rosemary, lavender, lemon balm, sugar and water, served in a paper cup. 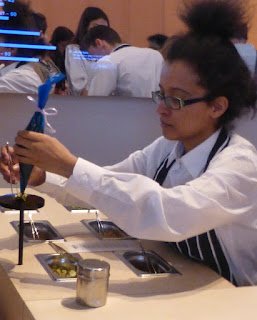 The exhibtion has four sections: Compost, Farming, Trading and Eating. The final one looks at the role of the table, the challenges we face in feeding the world, and scientific projects, ingredients and recipes that push the boundaries of ingenuity in cooking. A pop-up food bar provided by the Centre for Genomic Gastronomy's LOCI Food Lab (above) makes tiny canapés to order once visitors choose three of their food priorities from a 15-strong list. My choice of a “delicious, affordable and protein-rich” canapé contained Essex chia seeds, British yellow peas and quinoa, mould microprotein and dried and powdered anchovy. The end result, below, certainly tickled the tastebuds. 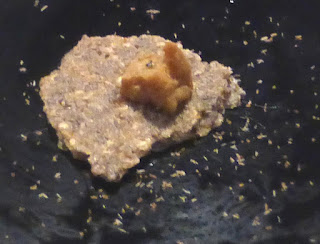 The show’s co-curators, Catherine Flood and May Rosenthal Sloan, point out that food is one of the most powerful tools through which we shape the world we live in. They say that now is a crucial moment to ask not just what will we be eating tomorrow, but what kind of food future do we want? This exhibition is bursting with intriguing ideas and suggestions.
FOOD: Bigger than the Plate is at the V&A Museum in South Kensington until October 20, 2019. Tickets £17, concessions available.
https://www.vam.ac.uk/exhibitions/food-bigger-than-the-plate
Posted by sandra at 15:13:00