Inspiration at the Edible Garden Show 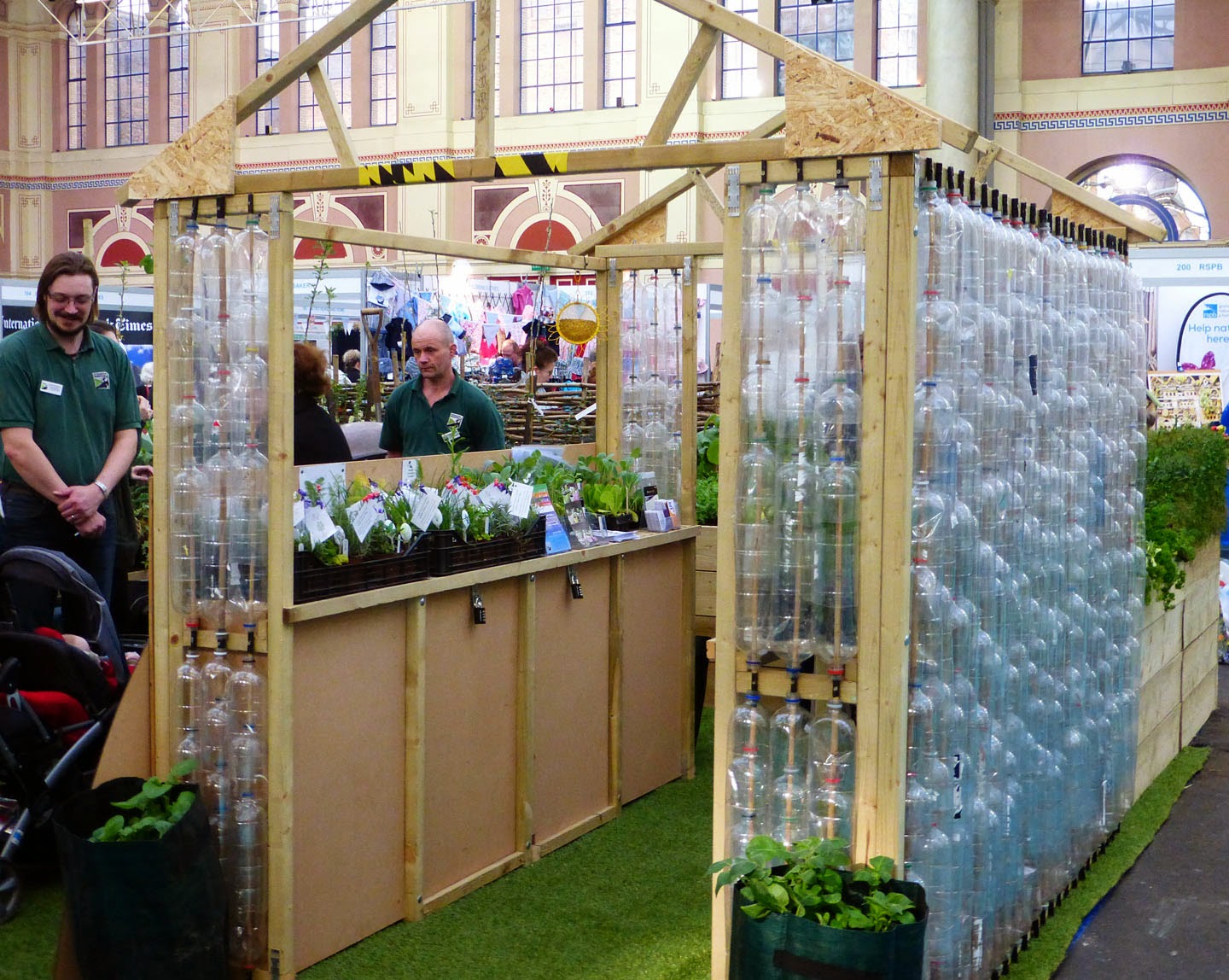 There were some interesting exhibits at the 2014 Edible Garden Show, held for the first time at Alexandra Palace in London,  but what really caught my eye was the Wiltshire Wildlife Trust’s Food Champions show garden.  Its focal point was this unusual greenhouse, made from 1500 plastic bottles. They’d been collected by local school children, washed, and with the bottoms cut off, threaded on vertical canes to make walls. A great way to give protection to tender plants, which could be adapted for small-scale projects.
The Food Champions is a 3-year venture which aims to get local communities growing their own food. Last year the organisers gave away more than 700 fruit trees, planted community gardens and taught local people how to grow and cook fruit and vegetables. This year their focus will be on the growing number of military families in Wiltshire, using food to help them become part of their local community. Here's hoping to see them at the show next year.
www.wiltshirewildlife.org/green-living/food-champions

The Vikings - Life and Legend


The British Museum’s Vikings exhibition has a lot going for it. These are a people who helped to shape modern Britain. They left us placenames, words (days of the week are named after their gods), legends -  and many people, myself included, still carry their DNA. 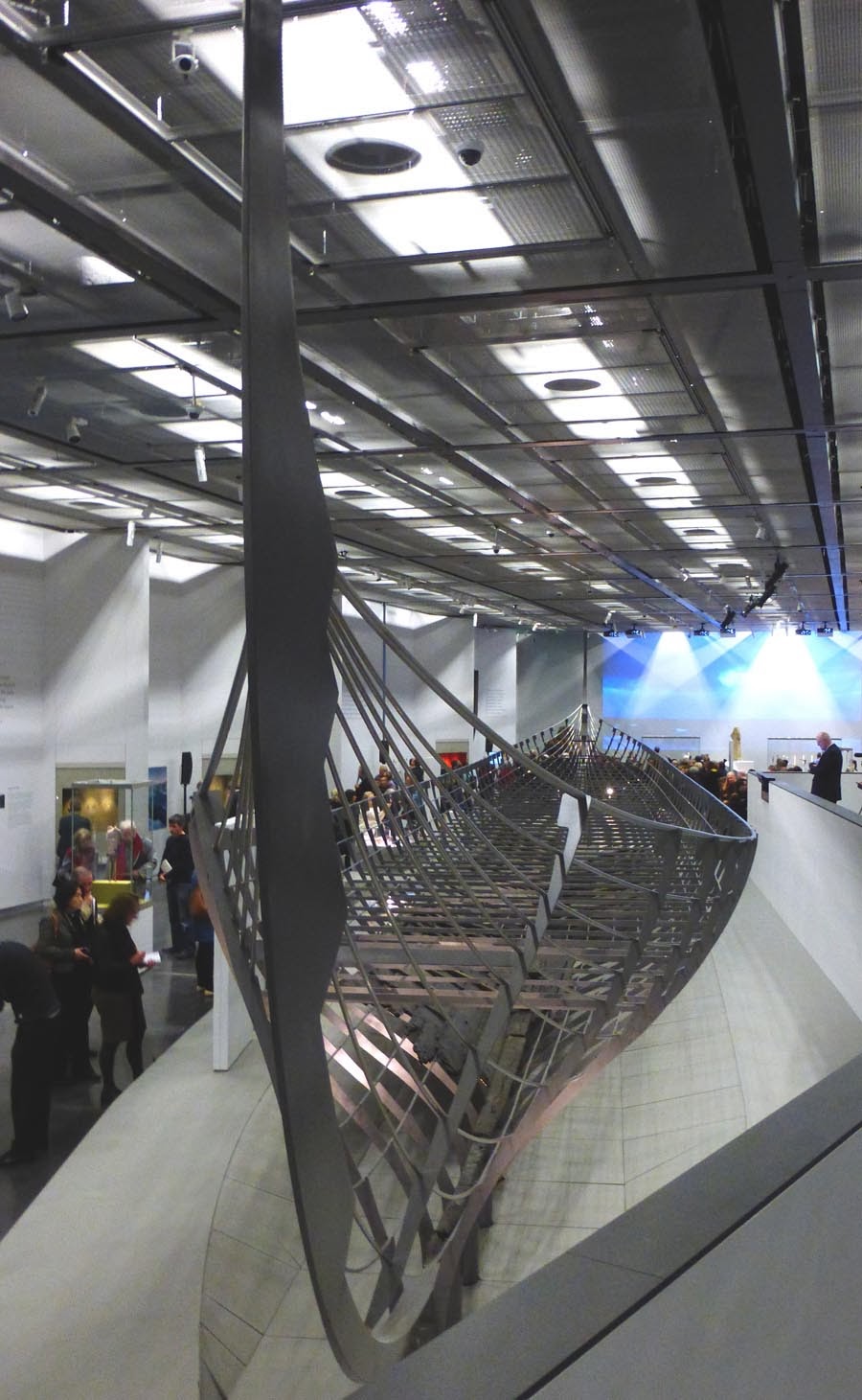 The Vikings were raiders, traders, but above all, travellers, so it’s fitting that the stunning centrepiece of this show is the Roskilde 6, the longest Viking ship ever found.  Uncovered in a Danish fjord  in 1997, it was built almost a thousand years ago for someone of very high rank, possibly King Cnut/Canute who, (when he wasn’t commanding the tide to turn back)  united England, Denmark, Norway and parts of Sweden. About a fifth of the orginal timbers remain, and here they are, cradled in a stainless steel frame that echoes the size and shape of the original boat. Even in this skeletal form the size - more than 37 metres in length – takes your breath away. How must it have looked when packed with warriors and gleaming with weapons and shields?
Boats like this enabled the Vikings to expand from their Scandinavian homelands and create a cultural network that stretched from the Caspian Sea to the North Atlantic and from the Arctic Circle to North Africa. The exhibition shows how they sailed vast distances,  plundering and pillaging, but also trading, founding settlements and intermarrying with the local population.  And when they left this world, they chose a boat to carry them to the afterlife. 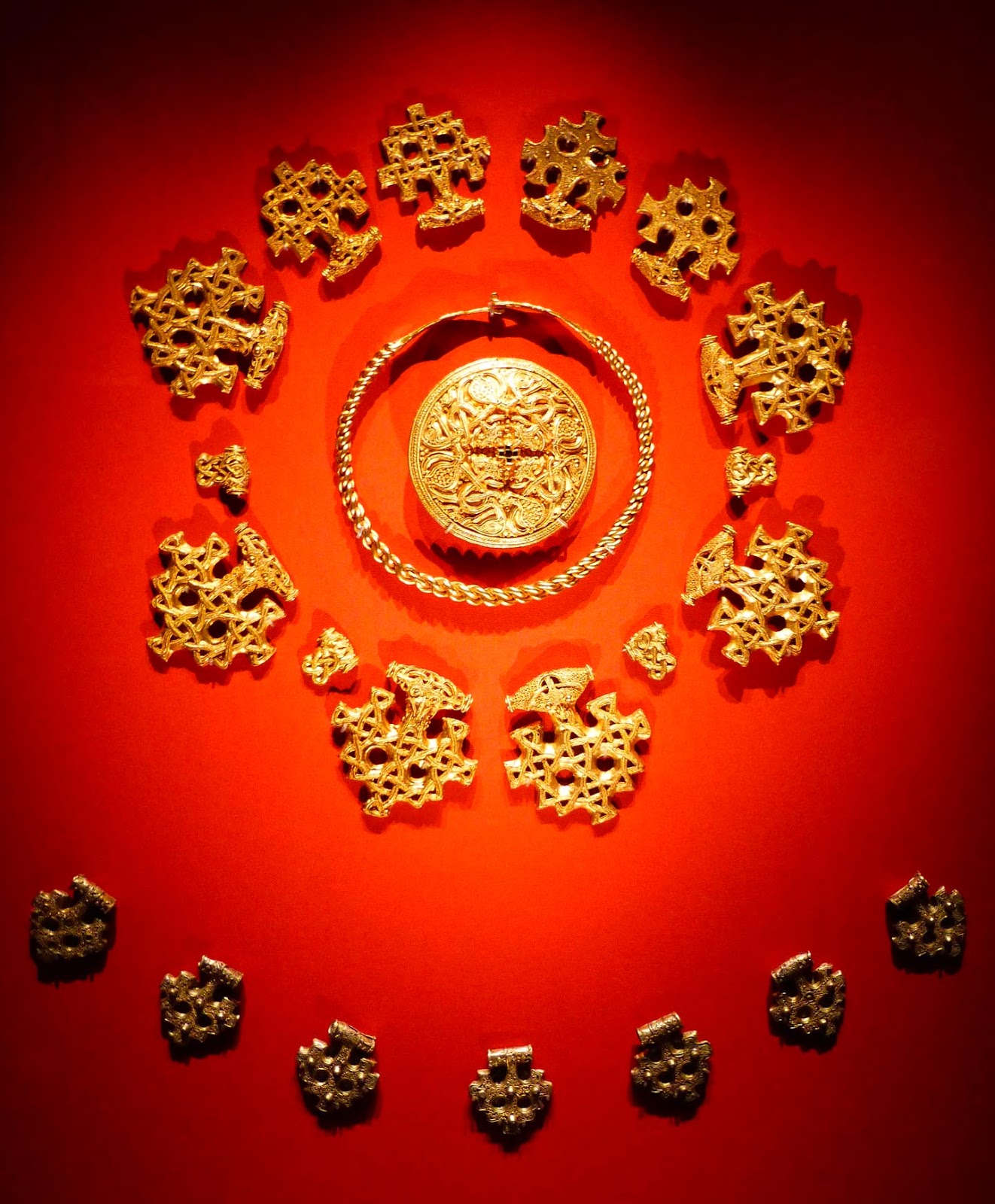 Although there was much violence in their world,  the Vikings loved luxury and on display are some beautiful examples of gold neck rings, pendants and brooches -  easily portable wealth at a time when there were no banks (left, the Hiddensee hoard). But be warned: some of the objects are very small, and really need a magnifying glass to appreciate the details. 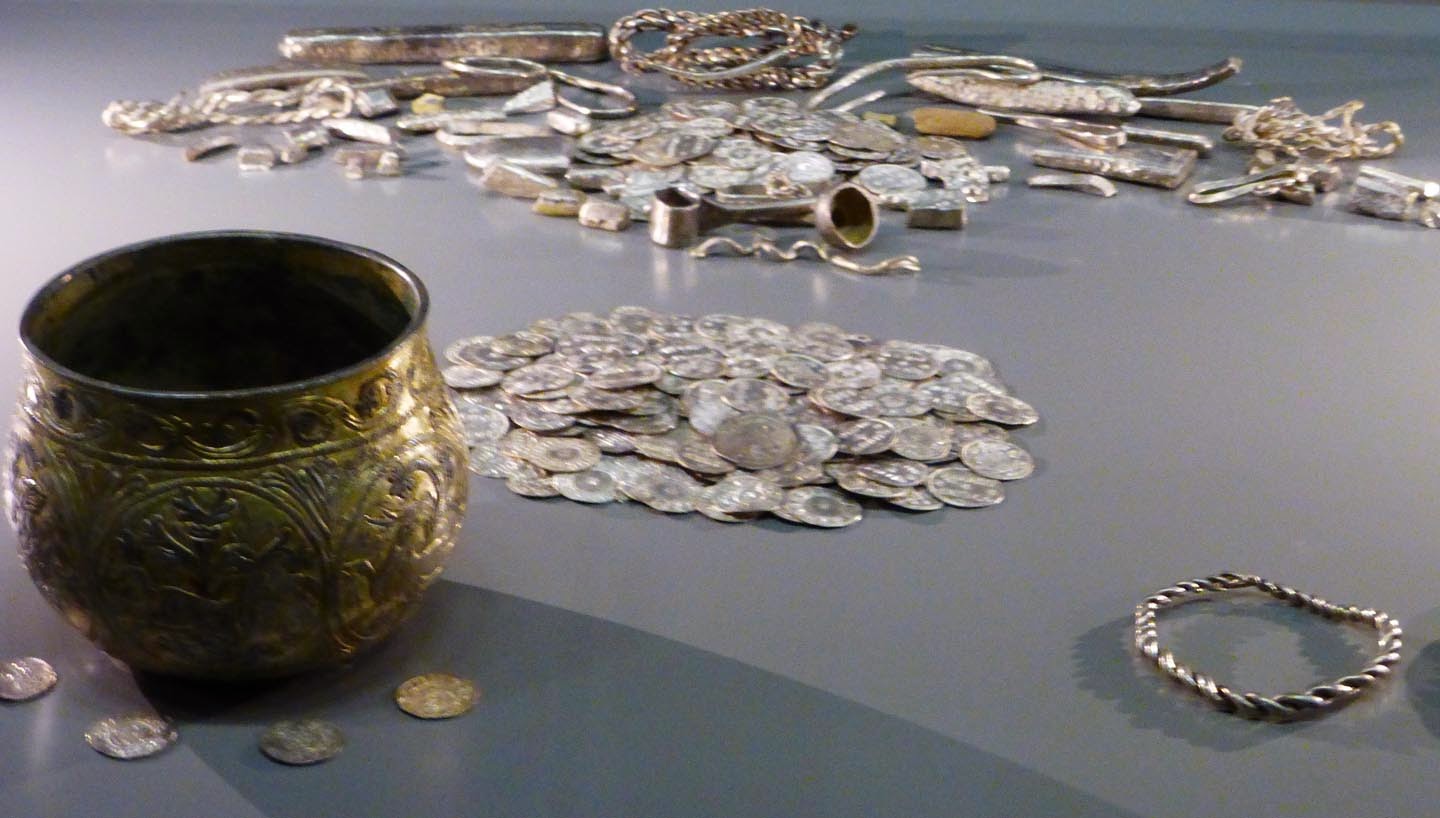 The exhibition also includes the Vale of York Hoard (left), discovered by metal detectorists near Harrogate in 2007. The coins, arm rings, bullion and hacksilver were probably buried for safety but never recovered. They come from as far apart as Afghanistan and Ireland and were found inside a much earlier silver cup, probably stolen from a Frankish church.

But Viking raids were not always sucessful.  In 2009 a mass grave was discovered near Weymouth in Dorset. In it were around 50 skeletons,  stripped of anything valuable and beheaded. Isotope tests show the victims were  from Scandinavia – perhaps the crew of an expedition that met fierce local resistance. Fittingly, the bones (below) lie in a case beside Roskilde 6. 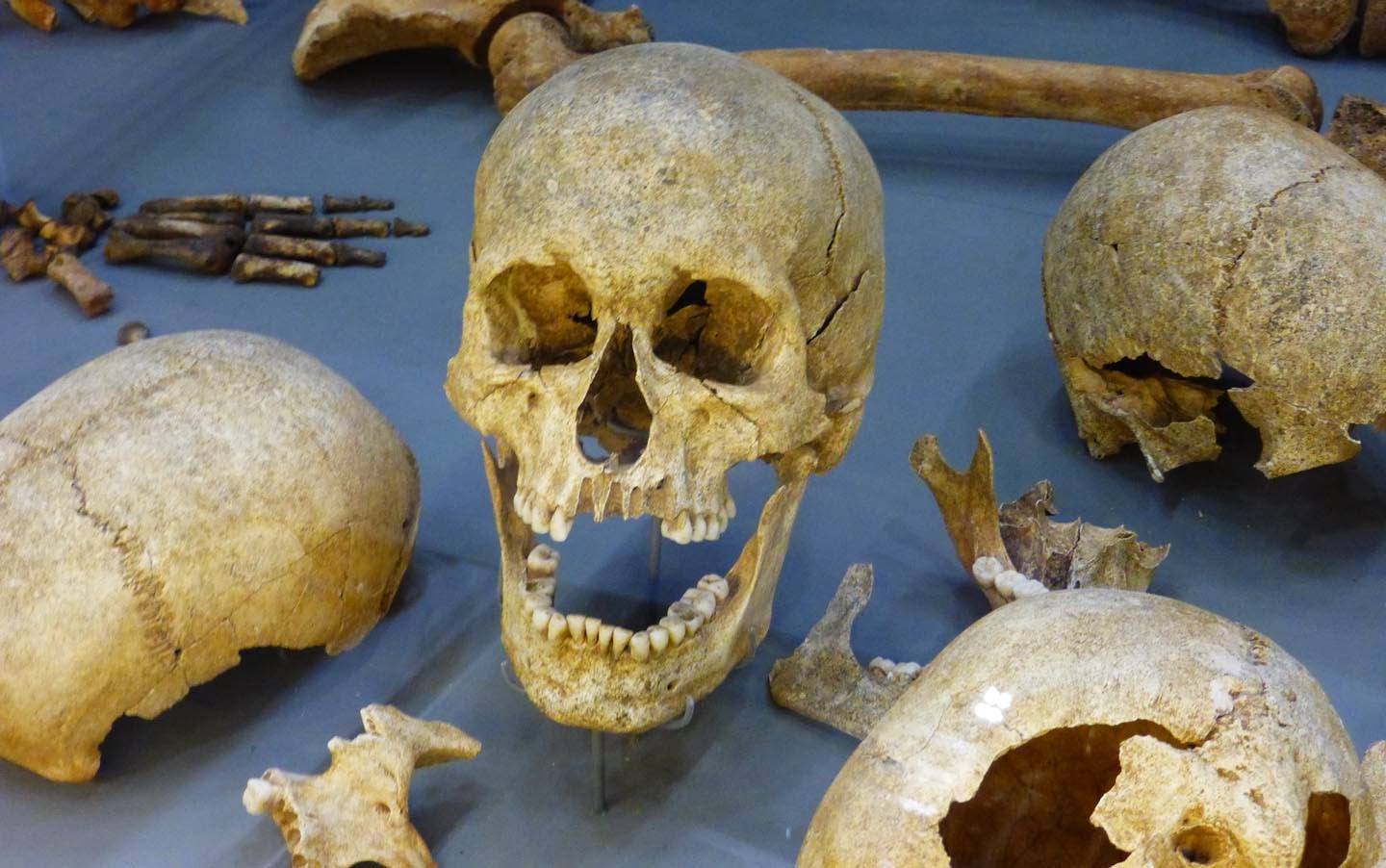 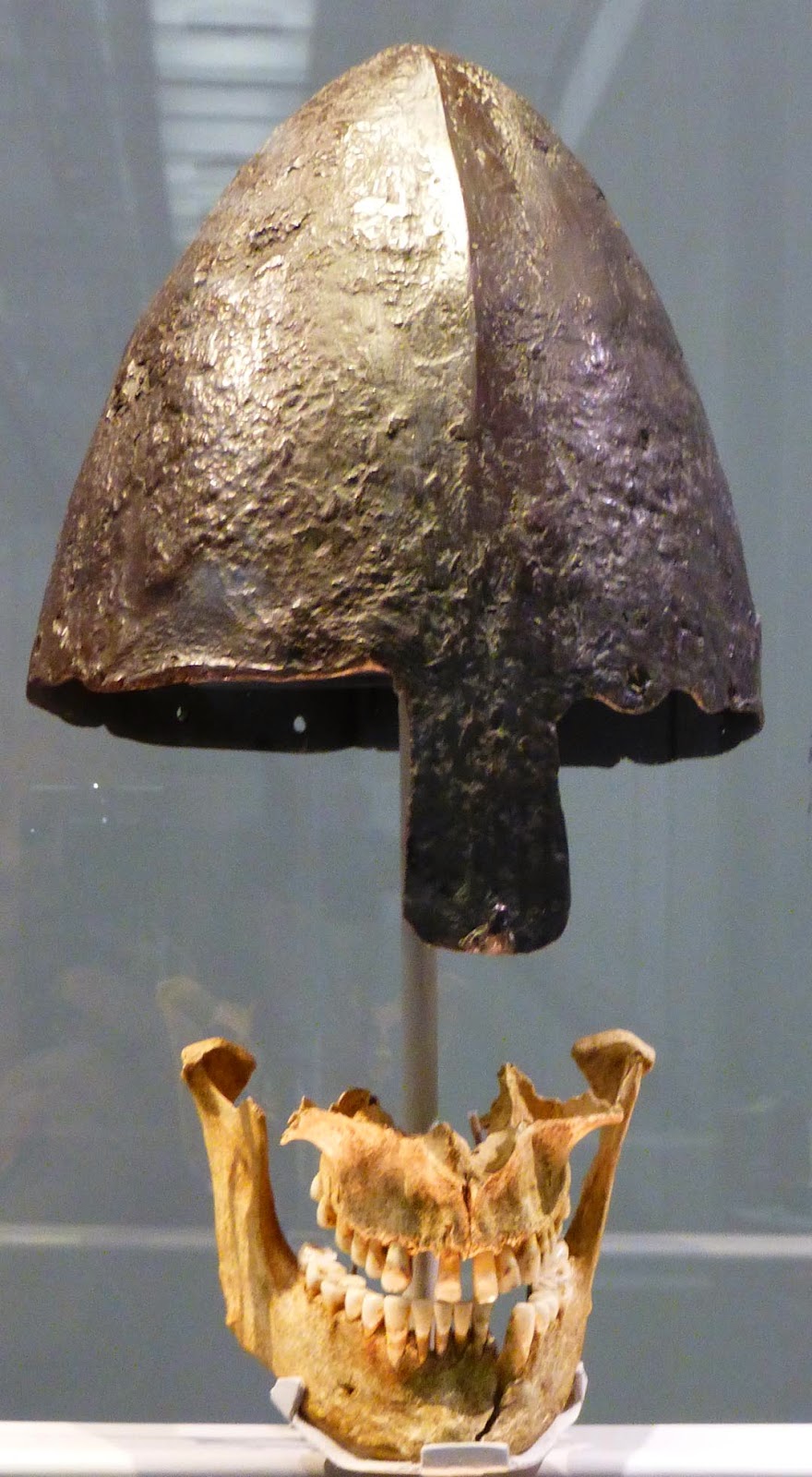 There’s a lot of information in the exhibition, but I came away feeling an opportunity had been missed to capture the imagination, especially that of younger visitors. It was put together in conjunction with the National Museum of Denmark and the Staatliche Museen zu Berlin, and the emphasis is very much on the archaeological side of things. If you read the description by a (non-horned) helmet you learn the jawbone displayed with it had filed teeth that may have been painted to give the warrior a fearsome appearance, and he could also have had tattoos and warpaint. So why not make more of this and perhaps include a picture?

And how would Roskilde 6 have looked in its heyday? How many men could it have carried and what would life on board have been like? What about Viking rulers with evocative names like Svein Forkbeard, Eric Bloodaxe and Ivar the Boneless?  However, the catalogue is excellent, and on Thursday April 24 at 7pm  a live guided tour of the exhibition is being screened at almost 400 cinemas across the UK,  presented by Michael Wood and Bettany Hughes -  historians adept at making history come alive.
British Museum, London, March 6 - June 22 2014
More info: www.britishmuseum.org.


http://www.youtube.com/watch?feature=player_embedded&v=QYNjdGYa4LA
Posted by sandra at 16:19:00 No comments: