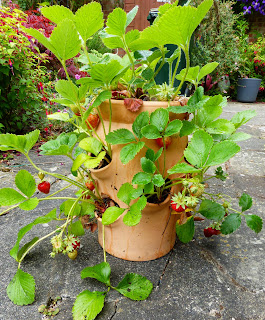 The other (below) was with a growing bag supported by planks and raised on bricks – a method inspired by the National Trust’s kitchen garden at Polesden Lacey, near Dorking in Surrey. 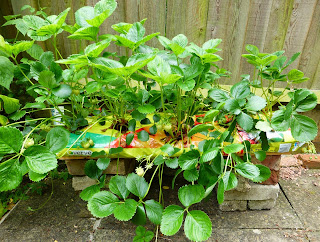 So, as promised,  here are my results. 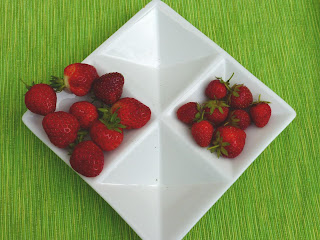 Each method used the same number of plants and has produced around 45 strawberries (some still green). But interestingly, the grow bag fruit (on the left) - as well as the plants - are noticeably larger.This may be because the bag holds more water than the pot, even though I put a perforated bottle in the middle of the latter to try to regulate the flow. One plant in a lower hole of the pot has no fruit at all. Perhaps the bees missed it, or the water didn't get through. It might have helped if the planter was raised off the ground a bit. 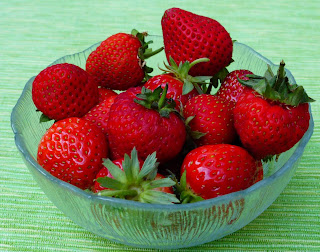 The fruit from both is delicious, and I’m thrilled with the results. Nothing beats nibbling a strawberry, warm from the sun, while wandering round the garden. I’ll be potting up as many runners as possible and next year perhaps have two grow bags instead of one. But I will persevere with the planter - it looks so pretty on the terrace.

Gifts for a new baby


How to mark the arrival of a new baby? Kate and William will be innundated with gifts, despite asking that instead, donations should be made to St Mary’s Hospital, where Prince George was born. They’ve already received a charm bracelet with a tiny pot of nappy cream attached, a backpack baby carrier from the Scouts, a maternity package of essentials from Finland that goes to all new mothers there, and a handwritten notebook of quotes and sayings from an Italian grandmother. 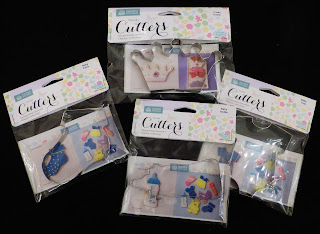 But if you're planning a celebration for a new arrival closer to home, how about whipping up some baby-themed biscuits? I love these cookie cutters from Squires Kitchen. Choose from a bottle, booties, a vest, dress, pram, and even a little foot. And for a royal touch, there's also a crown. To make life easy, they come with decorating ideas.  Happy baking!
http://www.squires-shop.com/uk/catalog/cookie-cutters

While some people adopt stray cats or rescue dogs, two weeks ago I took on this tree pit, at the base of a old plane tree by our street corner.  It was a sorry sight, attracting cigarette butts and litter, and a favourite stopping place for local dogs. Now, a bag of compost and some plants from a green-fingered neighbour (thank you, Margaret), have transformed it into an embryonic garden.  The current heatwave means going out with a watering can every evening, but the plants are starting to flower and the rubbish hasn’t reappeared.  There’ve been some encouraging comments from  passers-by, so who knows, perhaps by next year we’ll have a sucession of mini gardens along the street, as there are in nearby Blenheim Gardens (below) – my inspiration!
Posted by sandra at 15:42:00 No comments: 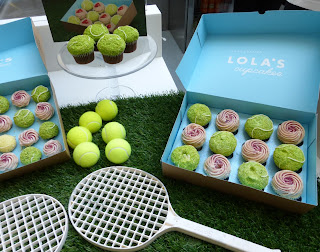 excitement seems to be everywhere. I spotted this mouthwatering display by Lola's cupcakes at the Brent Cross mall in north