In search of bluebells 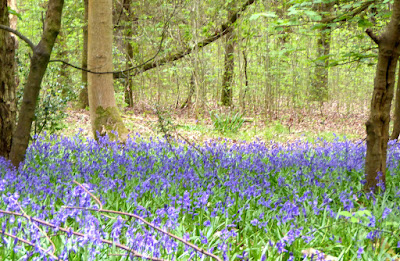 You don’t have to go far to find bluebells in spring, even in a city like London. Come April and May they cover the ground in shady borders and beneath woodland trees with a carpet of cobalt. 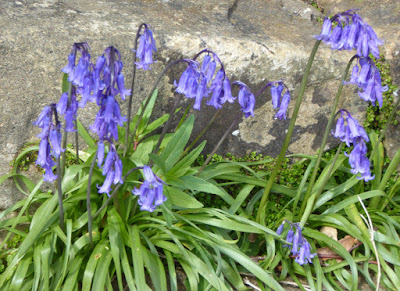 We went bluebell hunting in Stanmore Country Park, at the northern end of the Jubilee line. Until 1950 this was grazed open fields surrounded by hedges, but is now mostly covered with woodland – ideal for these delicate plants. There are two types - the stems of the native English variety (above) curve over, while the Spanish are more upright. The native variety is protected, so should not be picked in the wild. 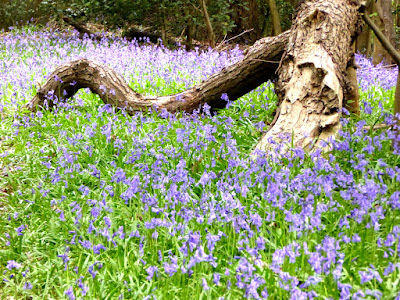 We followed the park's Eastern and Northern route trails with a slight detour to the highest point.  From there we were rewarded with a magnificent view south of London, with Crystal Palace on the horizon. (A helpful plaque identifies the landmarks.)

There is a downloadable guide to Stanmore Country Park and its nature trails at http://www.harrowncf.org/SCP_nature_trail_leaflet_low_resolution.pdf
Other places around London to view bluebells include Hampstead Heath, Highgate Wood, Osterley Park, Kew Gardens, Hyde Park, Wanstead Park and Oxleas Wood. 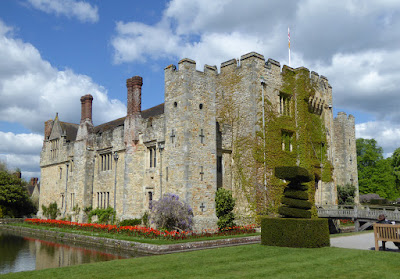 The grounds of Hever Castle, the childhood home of Henry VIII’s second wife, Anne Boleyn, are currently ablaze with tulips. The mild weather means the flowers are blooming rather earlier than expected this year, so some events and activities have been brought forward. 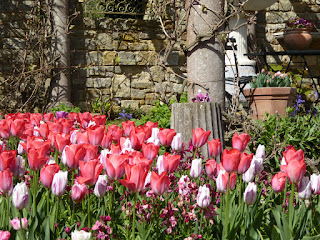 The Italian Garden has formal displays, with most of the varieties sporting useful labels. 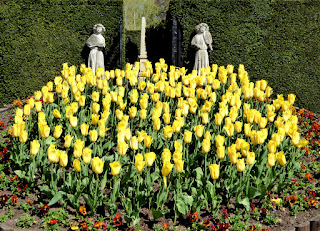 Elsewhere there are massed displays, stunning in the spring sunshine. 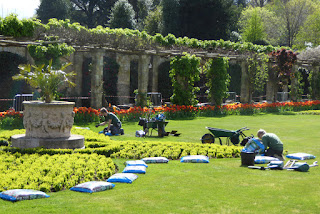 Gardeners were busy adding manure to the beds - evidence of the hard work needed to keep the gardens at their best. 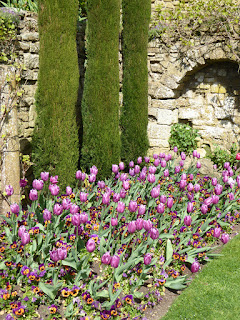 Some 7,000 bulbs in 60 different varieties were planted in the autumn, and will be dug up at the end of the season, many to be replanted in the borders. 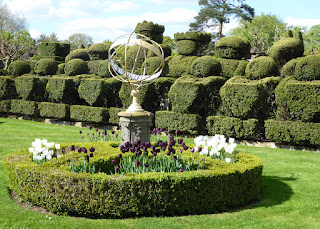 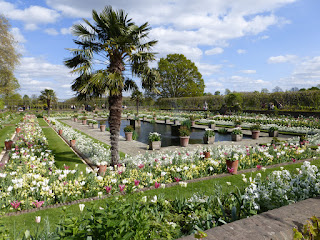 A new garden is flowering in the grounds of London's Kensington Palace in memory of Diana, Princess of Wales, who died 20 years ago in a car crash in Paris. Designed and created as a tribute to her by palace gardeners, it celebrates her elegance and style with a sea of flowers, including some of the Princess’s personal favourites. 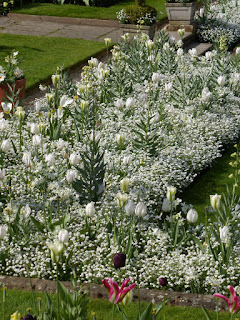 They've taken the Sunken Garden and transformed it into a Sissinghurst-inspired White Garden, planting more than 12,000 tulip bulbs, including the appropriately-named white Tulipa Diana. There are also swathes of white forget-me-nots, fritillaria, narcissus, and hyacinths, along with 500 Queen of the Night black tulips. 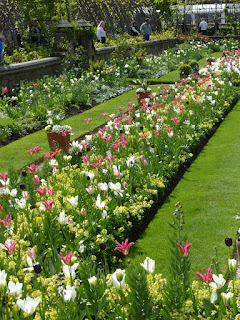 The palette is enlivened by pops of bright colour in the borders, and at the entrance from Kensington Gardens, there is a spectacular display of Texan Flame tulips (below). 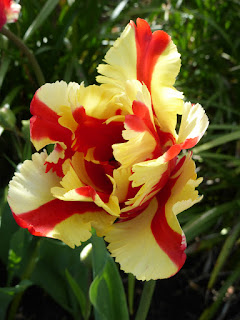 It’s a stunning creation, which can be viewed from the surrounding raised walkway. 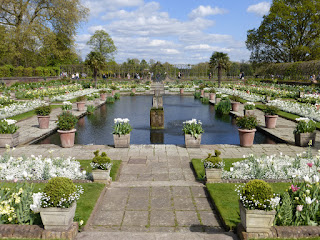 The garden is a temporary one, coinciding with an exhibition inside the Palace of some of her iconic dresses – Diana: Her Fashion Story. From mid-May the tulips will be replaced by a new scheme which will include white roses surrounding the central reflective pool, and beds filled with lilies, gladioli, cosmos, gaura and fragrant nemesia. 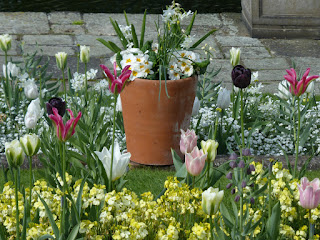 Entrance to the garden is free. Diana: Her Fashion Story continues throughout the year.
http://www.hrp.org.uk/kensington-palace/#gs.PwYhY3g

Walking the Lea Valley 8: Where Alfred the Great outwitted the Danes 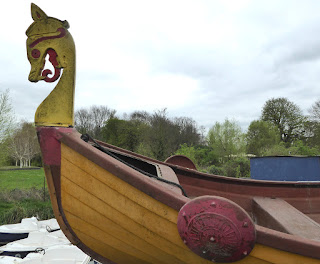 In 894 AD, things weren’t going well for King Alfred. An army of marauding Danes had sailed up the Lea Valley, seemingly looking for somewhere to set up a base – they’d even brought wives and children with them. They established a fortified camp by the river some twenty miles north of London and a direct attack by Alfred’s troops failed to dislodge them. So the wily king tried another tactic – he diverted or blocked the river, trapping the invaders and their ships. With winter approaching and few provisions, they were forced to abandon their vessels and retreat, some to Northumbria, others returning to the continent. After that, they more or less gave up. The exact site of Alfred’s triumph isn’t known, but on our latest walk, from Cheshunt to Broxbourne, we spotted this small replica of a Viking ship (above) at the Lee Valley Boat Centre – a fitting reminder. 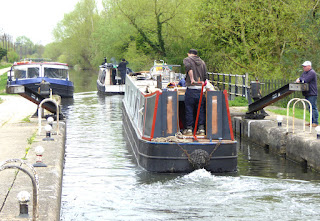 It was a very peaceful walk, punctuated by the cries of Canada Geese and the occasional chugging canal boat. 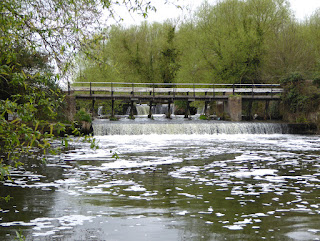 At Kings Weir (above) our walking group met fishery manager Barbara Newton, whose family have been associated with the area for several generations. She told us of the wide range of fish and wildlife that frequent the area – Barbel are a speciality, and can reach up to 16lb. There are also bream, perch, pike, roach and dace. 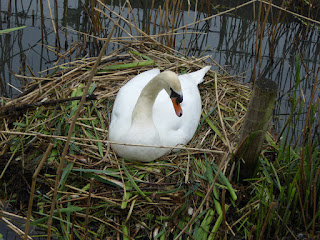 Back on the Lea Navigation, we passed a swan nesting patiently right by the towpath, and some imaginative floral decorations on one of the many canal boats moored there. 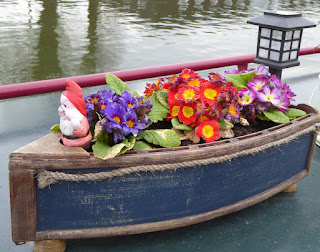 Lunch was at the Crown Inn, which has served Broxbourne for several hundred years. (The current building replaced the old Crown in the 1930s.) Then there was time for a visit to Broxbourne’s historic church, St Augustine’s. 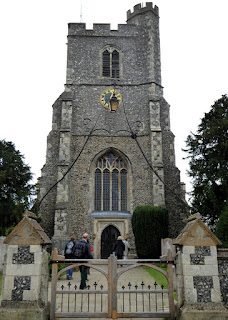 Though the door was shut, the people at the Parish Centre kindly unlocked it and said we could stay as long as we wanted. The parish is mentioned in the Domesday book of 1086.  The date of the original chancel and nave aren’t known, but the church was rebuilt and enlarged around 1460, probably by the Lord of the Manor, Sir John Say. 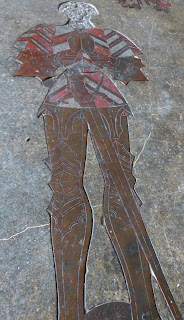 The chest tomb of him and his wife Elizabeth, the brasses still resplendent with coloured enamelling, is still in the church and is a National Monument. 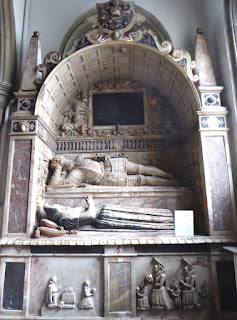 Nearby is the Cock family memorial, a splendid dresser tomb with life-sized effigies. Sir Henry Cock was ‘keeper of the wardrobe’ to Elizabeth I, which might explain his lavishly decorated armour. We also paused to read some of the inscriptions on the stones set in the floor. One remembers a Charles Hamilton, who ‘departed this life in 1751, aged 60, and ...died richer in a good name than wealth, and all who knew him loved him.’ A sign of how different life once was came from a Benefaction board just inside the entrance, showing charitable gifts going back to 1440. They include one from Sir William Thorowgood who in 1602 bequeathed ’26 wheat loaves, at 13 to a shilling ‘ to be given out each Sunday for ever, and provided for six sermons a year. 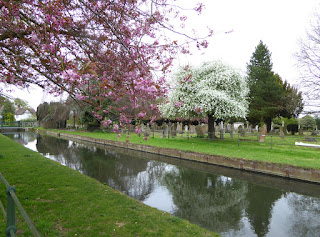 Outside again, and the New River, an artificial waterway opened in 1613 to supply London with fresh drinking water, took us past the churchyard and its spring blossom and back to the Lea - and the rail station. Although the name Broxbourne is believed to derive from the Old English brocc and burne, meaning badger stream, no badgers were spotted on this walk. However, the water vole apparently thrives in Silvermeade meadows, just south of the town. 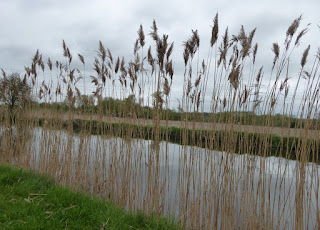