At a gardening event the other day, a top-floor flat dweller was lamenting the fact that although she'd like a little roof garden, lugging heavy bags of compost home and then up all those stairs was beyond her. 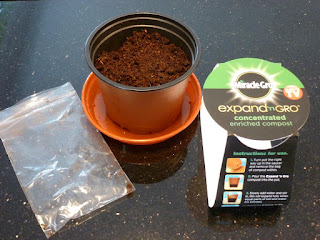 I reminded her of the lightweight composts now available. I've been trying Miracle-Gro's expand'n'gro. Dry, it weighs almost nothing, but add water when you get it home and it swells up to three times its size (and gets heavy). It’s said to contain enough nutrients for six months, and to require less watering, which would be a bonus for an exposed windowsill or terrace.
The sample I had came in a plastic bag (left). I added an equal amount of water, and it quickly swelled to fill the 12cm pot included. I’ve used it for a small aloe which has just been joined by an offspring, and am waiting to see how they fare.

Some feedback on another product I’ve been trying, Vitax’s NeverGreen, designed to protect outdoor surfaces against mould and mildew. The concrete of our small courtyard regularly turns green and has to be scrubbed and bleached every few months – a task I loathe. I applied some NeverGreen at the beginning of March, and despite all the rain, the surface is still clear. I’ll report back on this again in the autumn.
Both products can be found in the UK at garden centres, DIY outlets and on the internet.
http://expand-n-gro.co.uk/how-it-works
http://www.maxnevergreen.com/what-is-nevergreen
Posted by sandra at 11:31:00 2 comments: 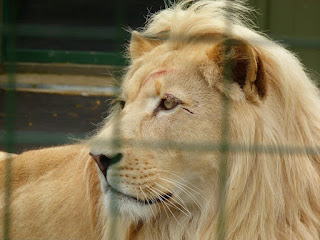 The Wildlife Heritage Foundation in Kent has some new inhabitants – two rare white lionesses. They’ve come from South Africa, where only a handful remain in the wild, and the hope is that they will mate with Themba, a white lion already there (left).
The two sisters, Sophia (above) and Joy (below), arrived on a damp May morning after an overnight flight. 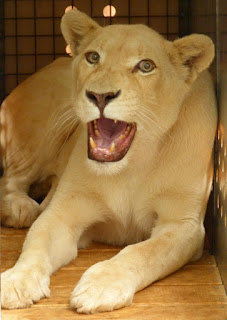 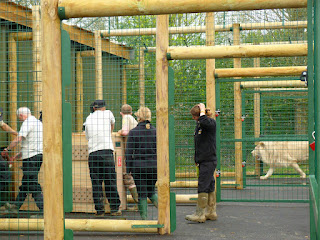 Watched by two television crews and a number of journalists, the kennel-type boxes in which they’d been travelling were carefully carried through to the new enclosure built for them. With Themba, they will remain in quarantine for several months, starting off in adjoining runs while getting accustomed to each other. 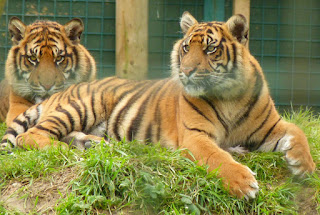 The foundation has already had major sucesses in caring for and breeding engangered big cats such as Sumatran tigers (left) and Amur leopards, and it’s hoped there’ll be some white lion cubs in the not-too-distant future.
The foundation is on a farm close to Smardon, near Ashford. It was founded in 2002 by the Sampson family, who also own Paradise Wildlife Park in Broxbourne, Hertfordshire. Other WHF occupants include African lions, jaguars, cheetahs, pumas and snow leopards. Because of the breeding and conservation programme, it’s not generally open to the public but there are fundraising open days in the summer, and it’s possible to book Big Cat Experience days (where you get to hand feed some of the animals) or sign up to be a ranger for the day. More details at www.wht.org.uk or ph 01233 771915. 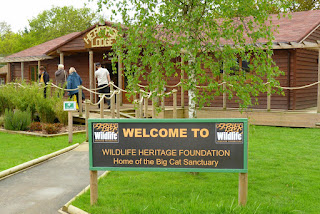 In the meantime, here’s wishing Themba, Sophia and Joy a happy time together.
Posted by sandra at 22:48:00 No comments: