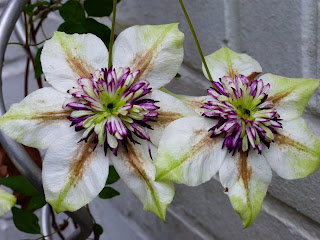 Apparently the mild weather in London has tricked nature into thinking spring is here already. That might explain why this Duchess of Edinburgh clematis, planted as a tiny seedling in the late summer, began flowering a few weeks ago. The heavy rain and strong winds have left it rather bedraggled, but still the blooms hang on. A Choisya Ternata Sundance has also surprised me by breaking out in fragrant white flowers. 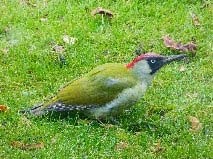 At the same time, there’s been an influx of early-morning visitors to the garden. Jays, tits, wood pigeons, blackbirds, a robin and two squirrels were spotted chasing around, competing for the seed spilt from the bird feeder. But the surprise sighting was this green woodpecker, which spent about 20 minutes determinedly digging away in the lawn. This was only the second time we’ve seen one – the last time was several years ago, in the oak tree.
According to the Met office, the mild weather is set to continue over the coming month.
Posted by sandra at 18:02:00 1 comment: