Flower Power at the Royal Academy

Painting the Modern Garden: Monet to Matisse at the Royal Academy in London is a real treat for anyone who loves gardens. The 120 paintings span the period from the early 1860s to the 1920s, beginning at a time when gardening was emerging as a popular pastime.  The middle classes were moving out of the cities and creating their own private Edens in the suburbs. Gardens became an extra room where they could relax and enjoy themselves, while artists could use them as outdoor studios, planting whatever inspired them to sketch and paint.
We see Louis Comfort Tiffany sitting in his Long Island Garden by an easel with brush in hand, surrounded by lavish blooms (above), Camille Pissarro’s working garden, complete with gardeners, in ‘Kitchen Gardens at L’Hermitage, Pontoise’, and Gustave Caillebotte’s showy ‘cactus’ dahlias in front of his greenhouse.
Kandinsky’s sunflowers (above) became an experiment with abstraction. The Spanish artist Joaquin Sorolla created a Moorish-style garden around his home in Madrid, while for Pierre Bonnard, the garden was a place to rest. (below).


Monet himself cultivated plants wherever he lived, selecting them by tone, shape and height, and setting them out so there was colour throughout the year; one painting shows red peonies growing under a protective straw awning.   “I perhaps owe it to flowers that I became a painter”, he recalled.
Renoir, also a keen gardener, worked closely with Monet, and painted him (above) as he captured on canvas a profusion of vast dahlia plants in a corner of his garden at Argenteuil – a work that is also on display.  Monet later created another garden at Vétheuil, where he portrayed his young sons surrounded by sunflowers. But his greatest creation was at Giverny, where he first rented, then bought, a property, adding to the grounds over the years. 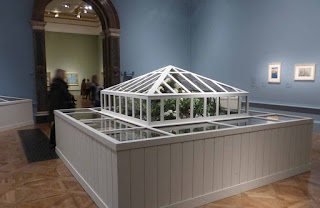 One fascinating room at the exhibition (above) is devoted to his botanical books, original letters and plans that tell the story of his application for planning permission to create his famous water garden in the face of opposition from local farmers and villagers. Devising and establishing the garden took years. He kept up with the latest horticultural research and techniques by subscribing to specialist magazines, and after 1890 employed a team of six full-time gardeners to help him realise his vision. For him, it was his “most beautiful work of art”. In 1914 he built a bigger studio and began his huge water lily paintings. From then until his death in 1926 he continued painting the pond, the water, the sky and the Japanese bridge. Even the outbreak of the First World War didn’t stop him, despite being able to hear the sound of cannons and battle from his garden. “Yesterday I resumed work....it’s the best way to avoid thinking of these sad times,” he wrote.

A stunning selection of these water lily paintings closes the show. The most famous must remain in the Orangerie in Paris, where they encircle two oval rooms, surrounding visitors with their beauty. But the final room of the exhibition has a breathtaking surprise – an earlier version, the Agapanthus triptych. These three huge paintings, each about 13 feet long, and shimmering with colour, were created to be shown together. They stayed in his studio until after his death, before being sold to three separate museums and this is the first time they have been reunited.
A film examining the role of the garden in art history, from Impressionism to the Avant-Garde, will be in cinemas from April 12, part of the Exhibition on Screen series. Painting the Modern Garden: Monet to Matisse features behind-the-scenes visits to some of the gardens that inspired the artists, and interviews with artists, gardening experts and critics.
Painting the Modern Garden – Monet to Matisse is at the Royal Academy, London until April 20 2016. Admission £17.60 with Gift Aid (concessions available). For more information Ph 020 7300 8090 or www.royalacademy.org.uk