On Saturday members from some of the London-based Abundance fruit-picking groups gathered to share their experiences and explore ways of working together next year. They came from as far afield as Peckham, Belsize Park, Archway, Wimbledon, Kilburn, Chiswick, West Ealing and Mapesbury (Willesden Green). Some groups have been going for several years and have facebook pages, while others are very new and, in one case, just about to get started, so there was a lot to talk about. 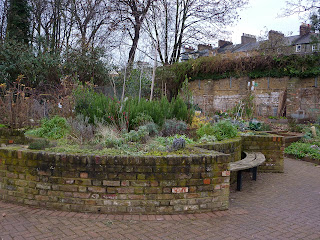 The venue was King Henry's Walk Garden (left), a community garden in the Mildmay ward of Islington, opened in 2007. Created on a patch of derelict land, it's primarily a garden for people who don't have one of their own, with 76 organic growing plots and planters (below) for the use of local residents and communal garden areas for recreation. (It opens to the public at weekends.) 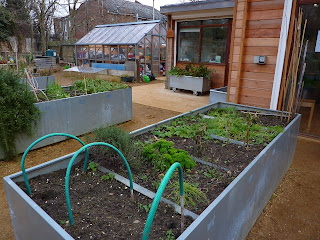 There's also an area of protected woodland (once the site of an old factory) and a resource building where activities such as our meeting are held. Despite the cold grey weather, the garden was an inspiration. Volunteers were carrying out regular maintenance, and it was heartening to see how many plants were sending up new shoots, despite the recent blanket of snow.
For more about the project see http://www.khwgarden.org.uk/