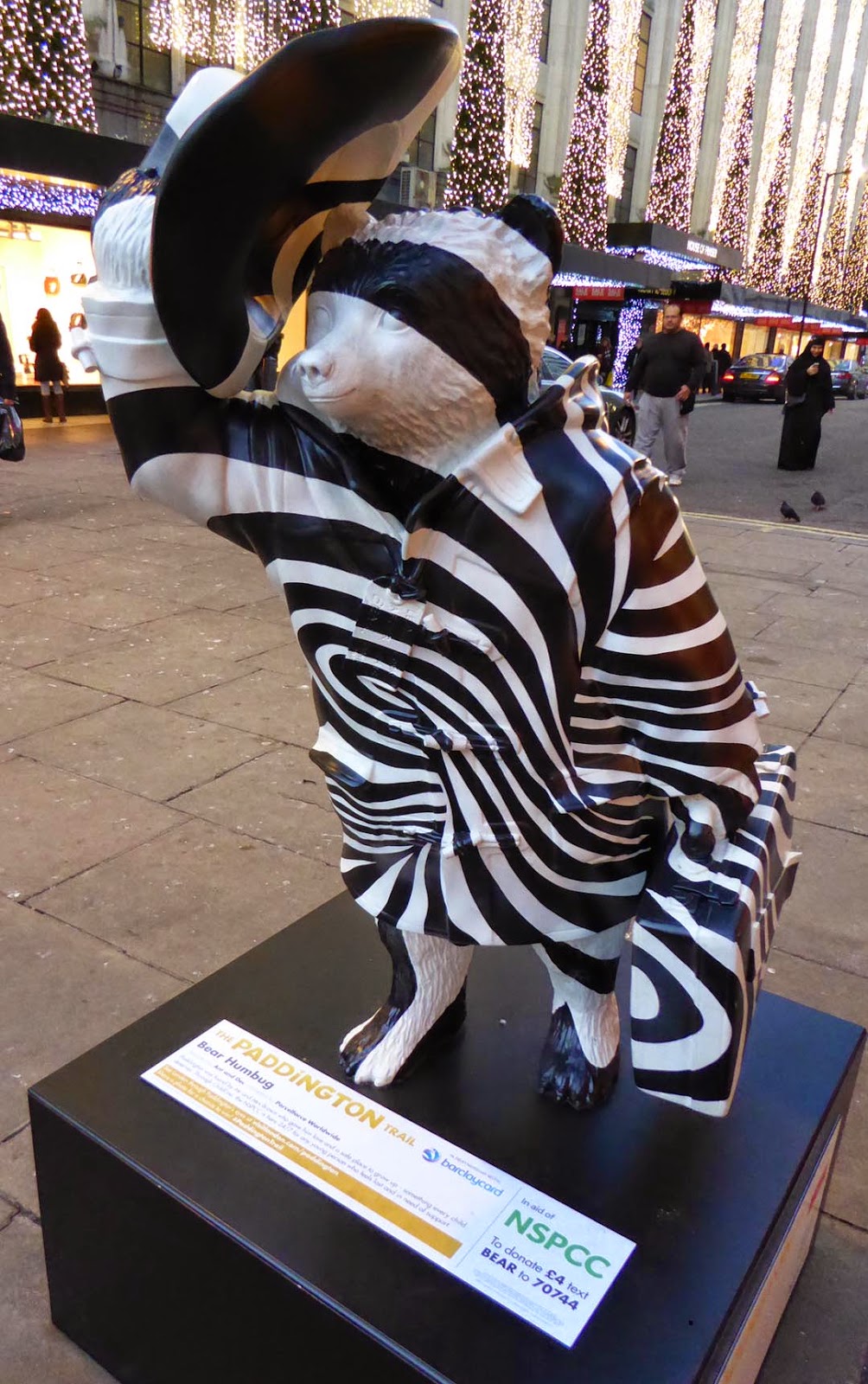 The Paddington Bear trail across London ended today, much to the sadness of some fans still trying to track down all 50 statues of the famous creation. Yesterday I came across a middle-aged couple, making the most of a seat by Ant and Dec’s creation Bear Humbug (left) in Oxford St. Despite their best efforts they were only half-way through the list of locations.


It has been fascinating to see how celebrities, artists and fashion designers have re-interpreted the bear from darkest Peru. Frankie Bridge, singer and Strictly Come Dancing contestant, covered her creation with coloured glitter. 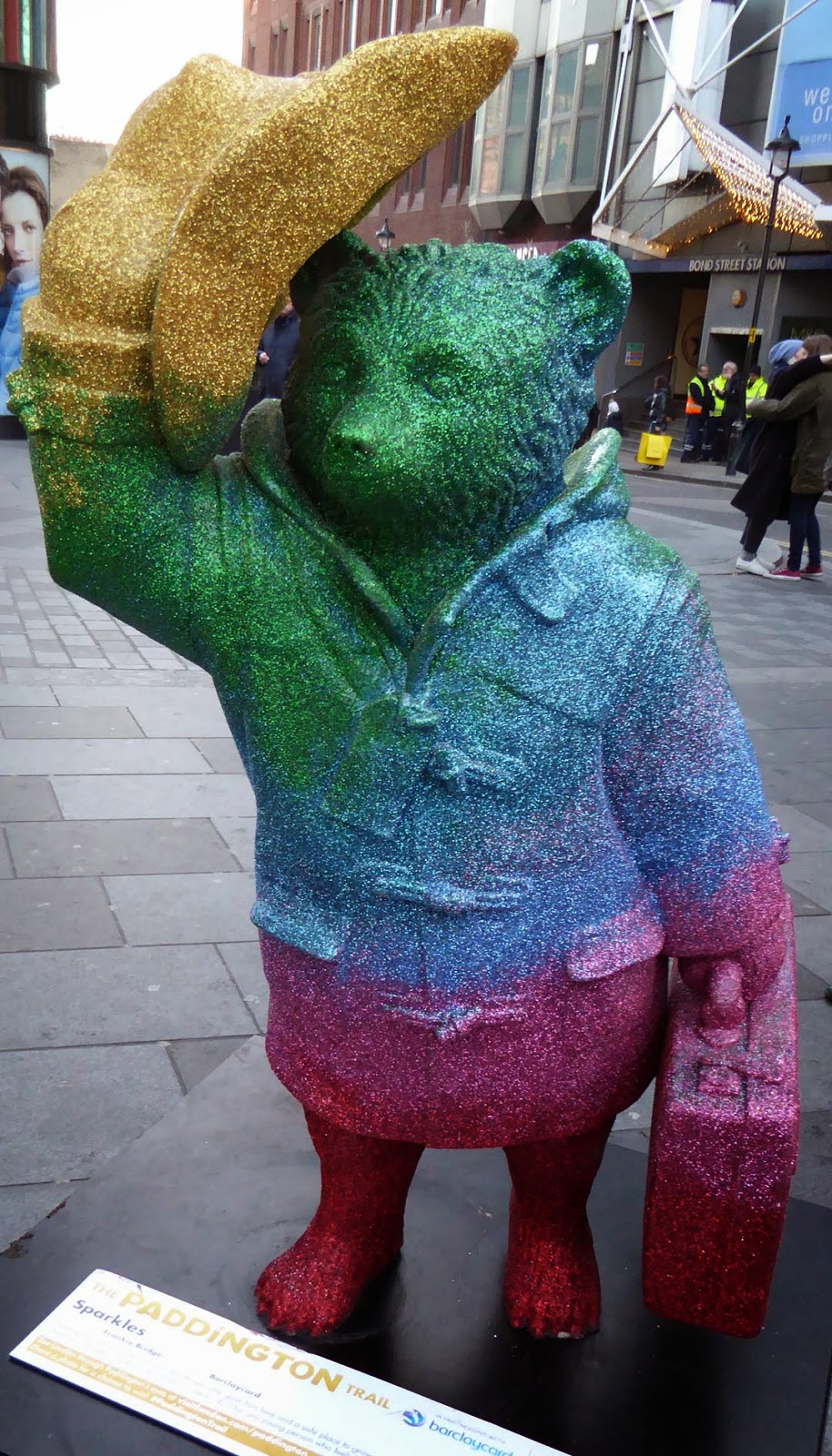 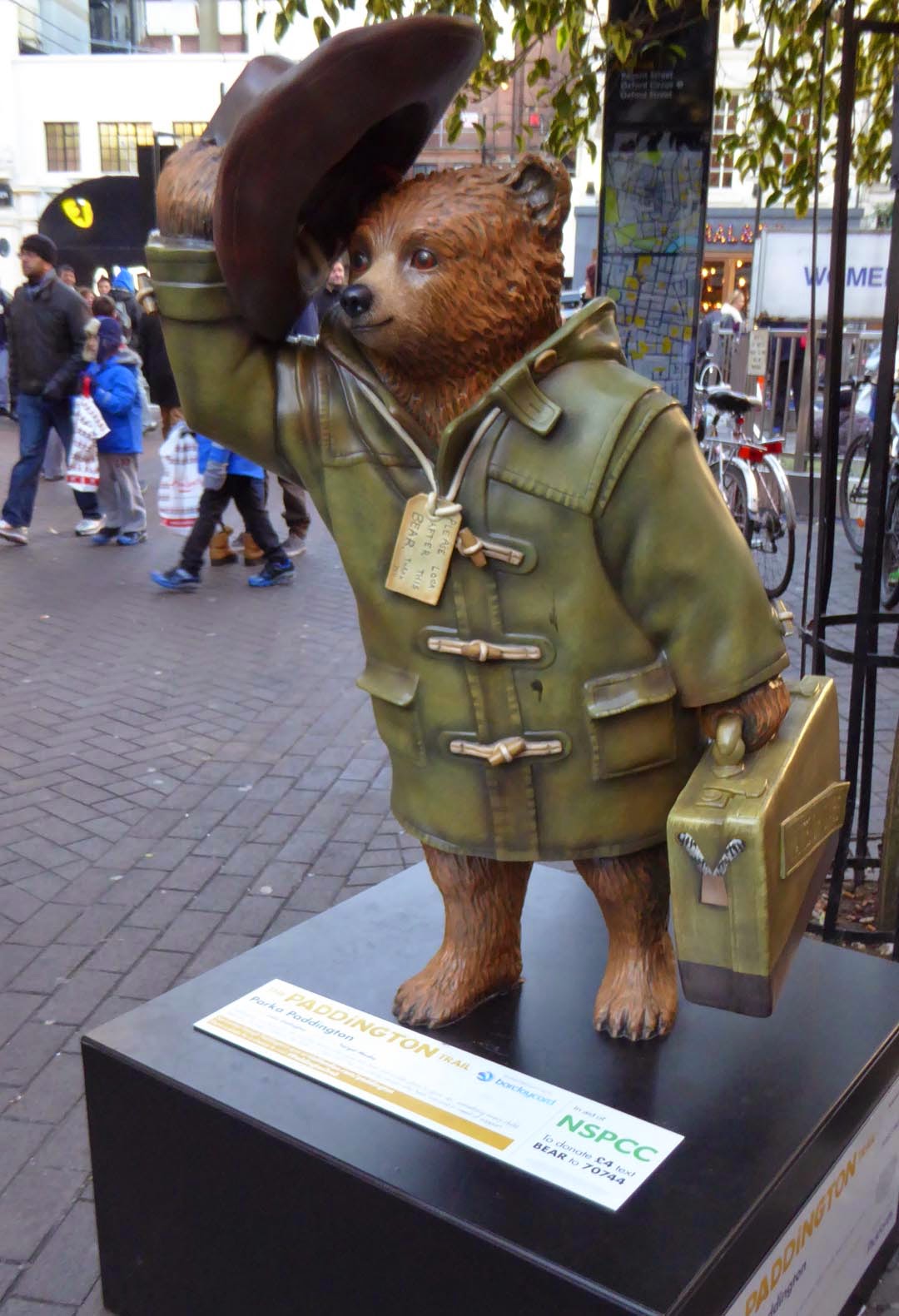 Model Kate Moss chose gold. Her Paddington, surrounded by jars of the bear’s favourite marmalade, was tucked up safely in a Selfridges window, to the delight of passing children. 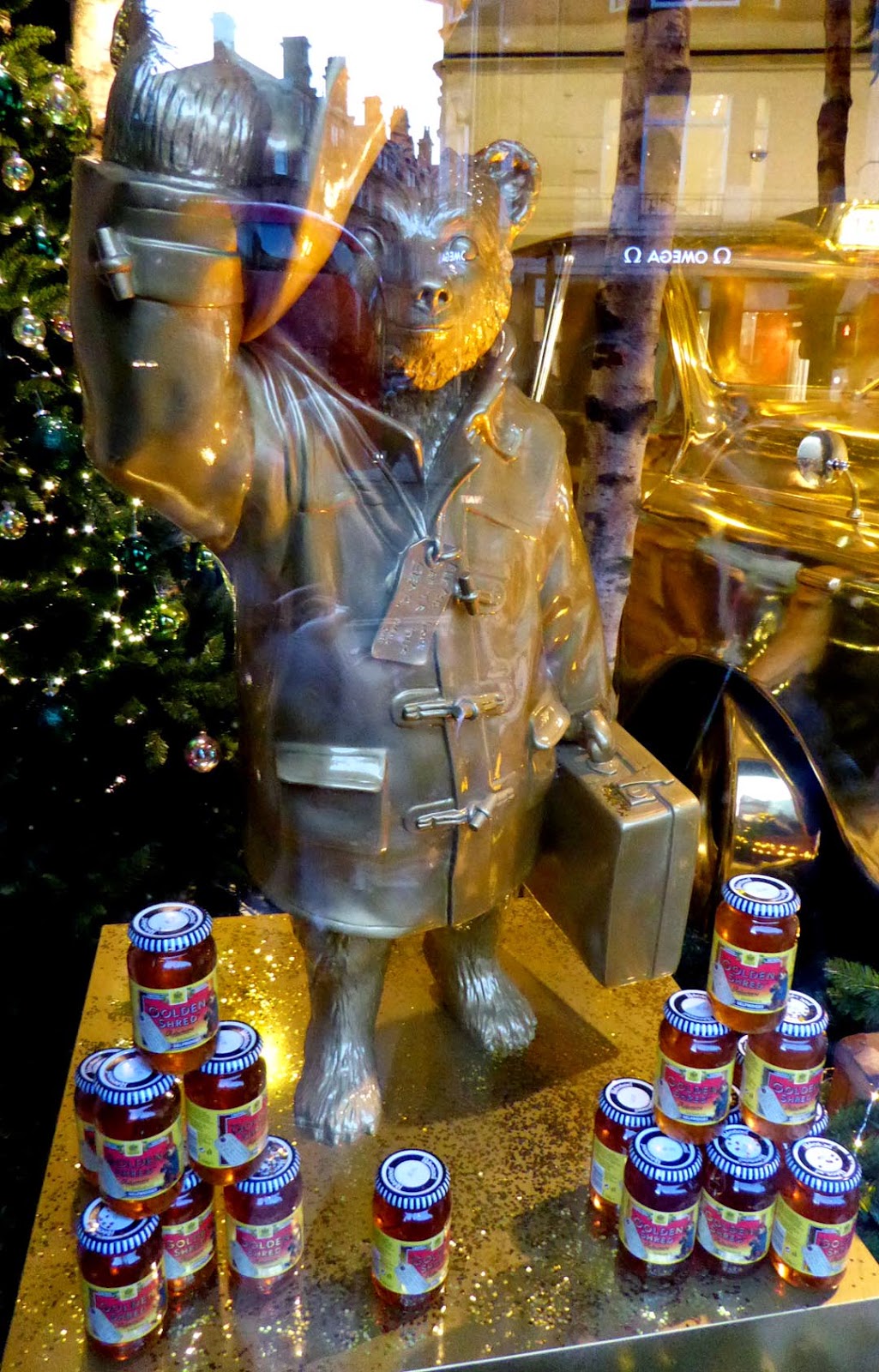 Michael Bond, author of the Paddington stories, chose to stick with the blue duffel coat and battered brown suitcase he first dreamed up in 1958. Fittingly, Bond’s creation was placed at Paddington Station where in the first book he was found by the Brown family with a note attached to his coat that read: “Please look after this bear. Thank you.” 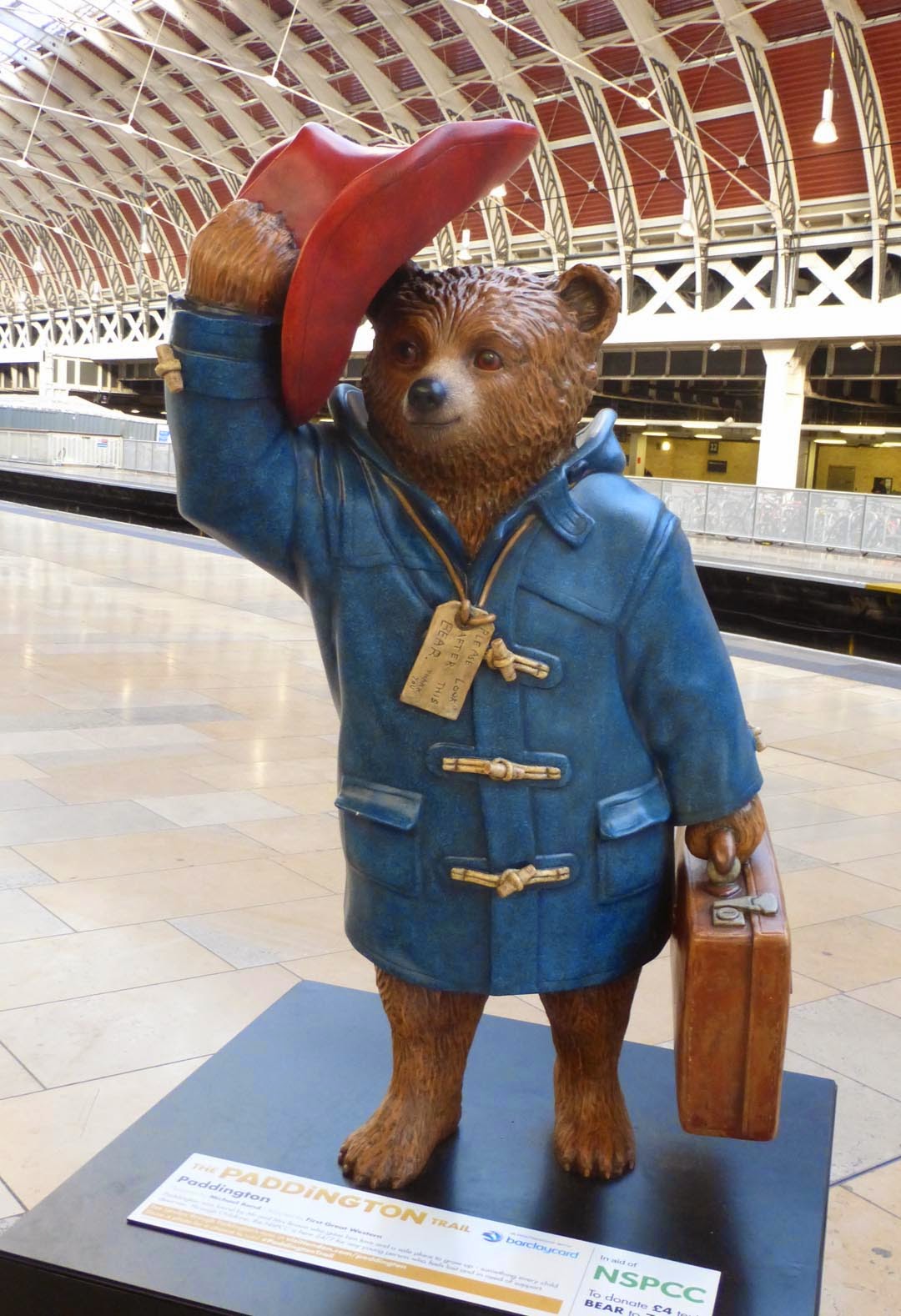 While the trail has finished, Paddington fans can still catch the movie, or find out more about his journey from page to screen at the Museum of London's free exhibition, A Bear Called Paddington. This has proved so popular it's been extended to January 25, 2015. http://www.museumoflondon.org.uk/london-wall/whats-on/exhibitions-displays/bear-called-paddington/

There's also the opportunity to bid for one of the trail bears at an on-line auction. Thirty-six of them are being sold to raise funds for charity with prices so far ranging from £1,200 to £5,000.
The auction continues until January 7. Details at https://onlineonly.christies.com/s/the-paddington-trail/lots/129
Posted by sandra at 19:45:00 No comments:


Sherlock Holmes: The Man Who Never Lived and Will Never Die 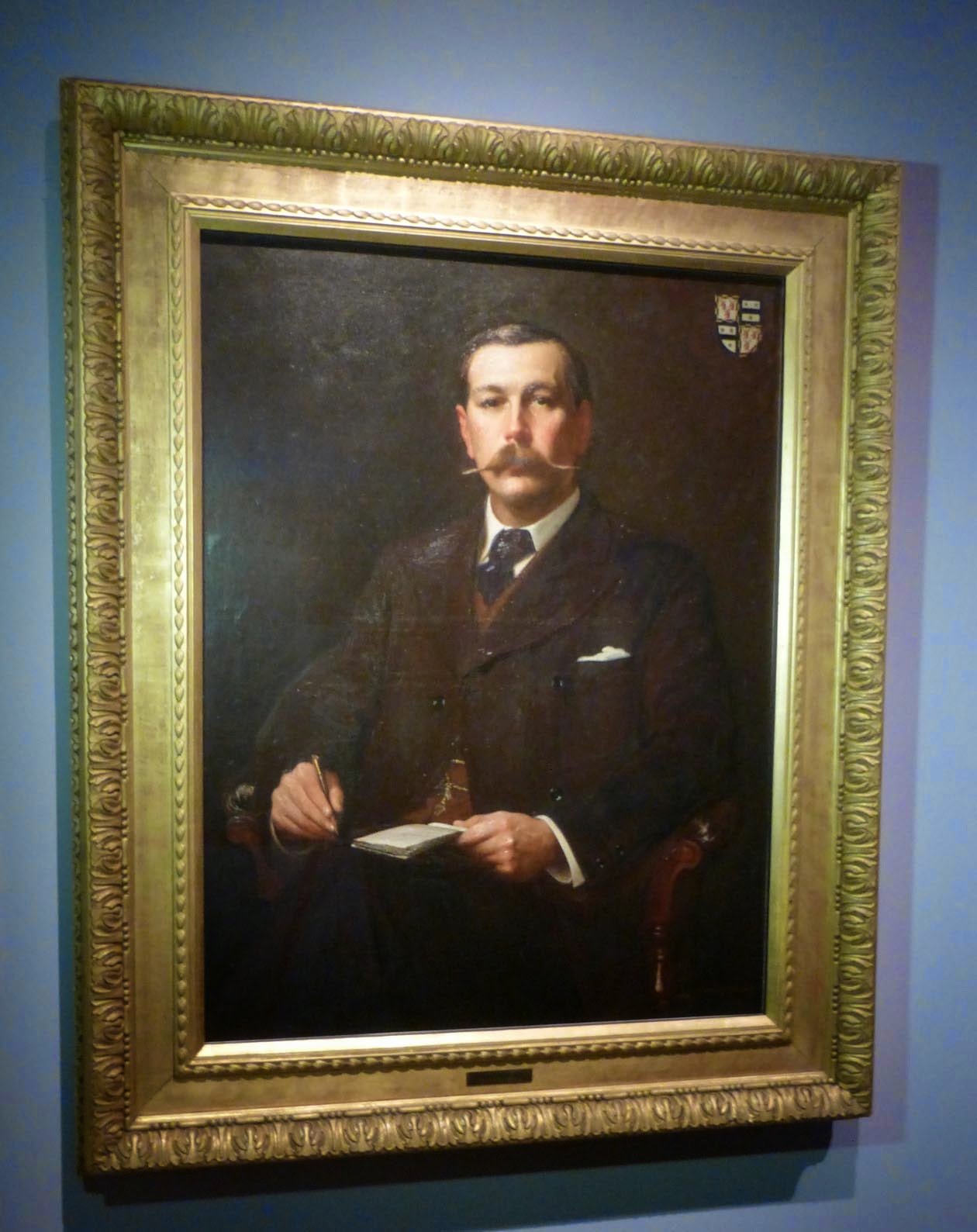 This is a must for everyone who loves Sir Arthur Conan Doyle’s creation and is fascinated by London. You walk through a book-lined door into a corridor lined with posters and clips from the many film, TV and theatre adaptations.  Around the corner is the story of how the world’s first consulting detective was created along with original illustrations, a 1927 filmed interview and a portrait of the author (left) and a notebook containing the outline of the first Holmes novel, A Study in Scarlet. 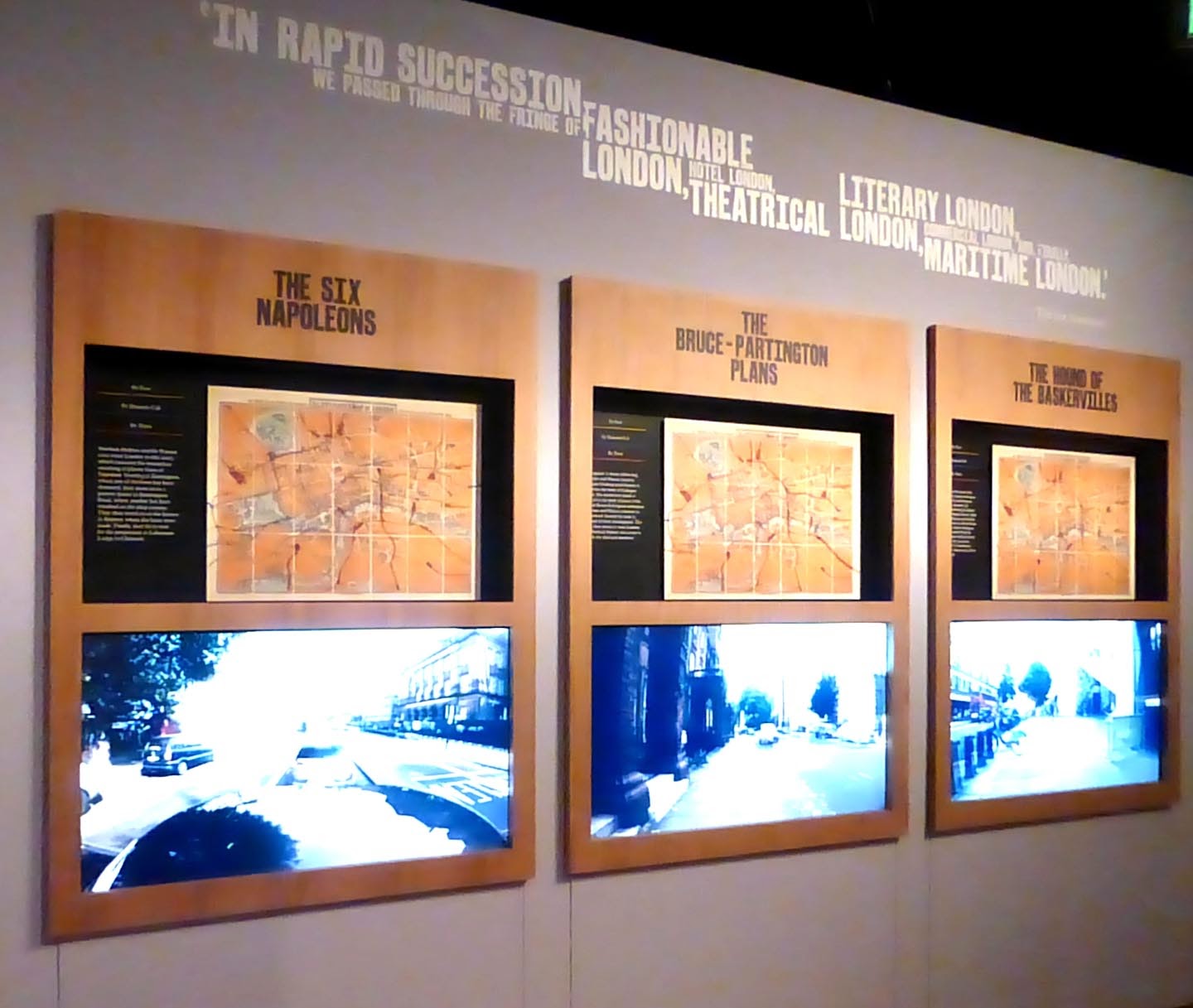 Victorian London, in which the adventures are set, is portrayed in the central section of the exhibition. There are contemporary photographs, paintings (including a Monet of Charing Cross Bridge in a yellow swirl of fog), drawings and antique maps which show the routes Holmes would have taken, and how the journey is today (left).

Then, past an iconic display of deerstalker, pipe, and magnifying glass, you see the many sides of Sherlock: the mastermind, the forensic scientist, the Bohemian, the model Englishman and the master of disguise. Highlights include the overcoat and dressing gown worn by Benedict Cumberbatch in the BBC Sherlock series and the earliest surviving manuscript page from The Sign of Four, relating to the detective’s use of cocaine.

The final section, The Immortal Sherlock Holmes, reflects on the longevity of the creation. In December 1893, Sherlock seemingly plunged to his death at the Reichenbach Falls in Switzerland with his arch enemy, Moriarty.  But pressure from readers caused Conan Doyle to resurrect the detective, and his last appearance is just before the outbreak of WWI, when he comes out of retirement to outsmart a German spy.

Museum of London to April 12, 2015 £10.90, £9 concs.
More details of the exhibition and associated events at  www.museumoflondon.org.uk/sherlock 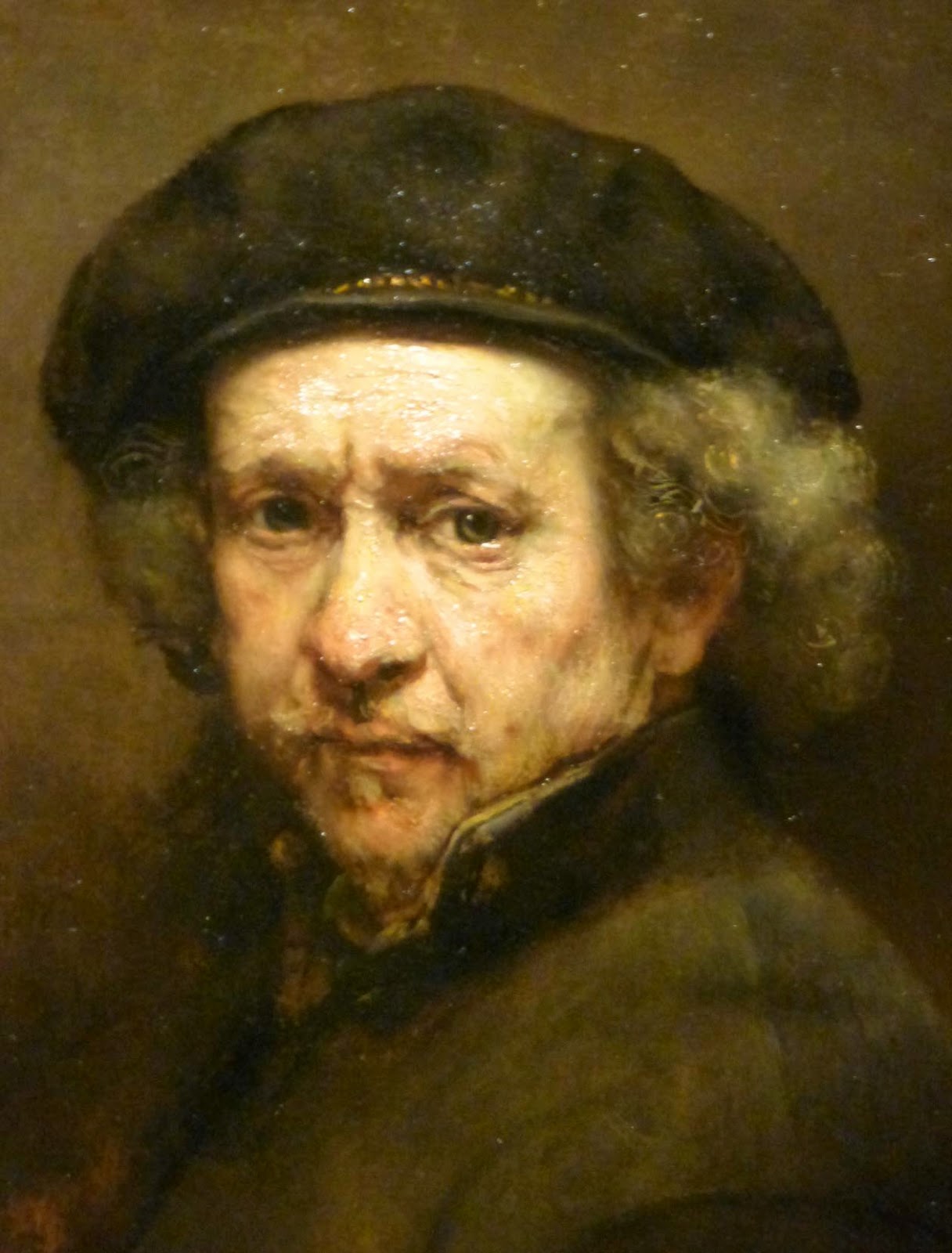 The first room of this exhibition is enough to take your breath away: four self-portraits in oils and a tiny etching, all from the last years of his life. He looks amused, thoughtful, sad. It was a difficult time: he’d gone bankrupt (his painting style had gone out of fashion), his common-law wife, Hendrickje, had died, as had his beloved son, Titus. Yet still he painted, experimenting with different techniques, the layers of paint laid on with a palette knife and becoming ever thicker. The works illustrate his manipulation of light and shadow for dramatic and symbolic effect, his interpretation of the works of others, and the way he conveyed the inner feelings of his sitters. 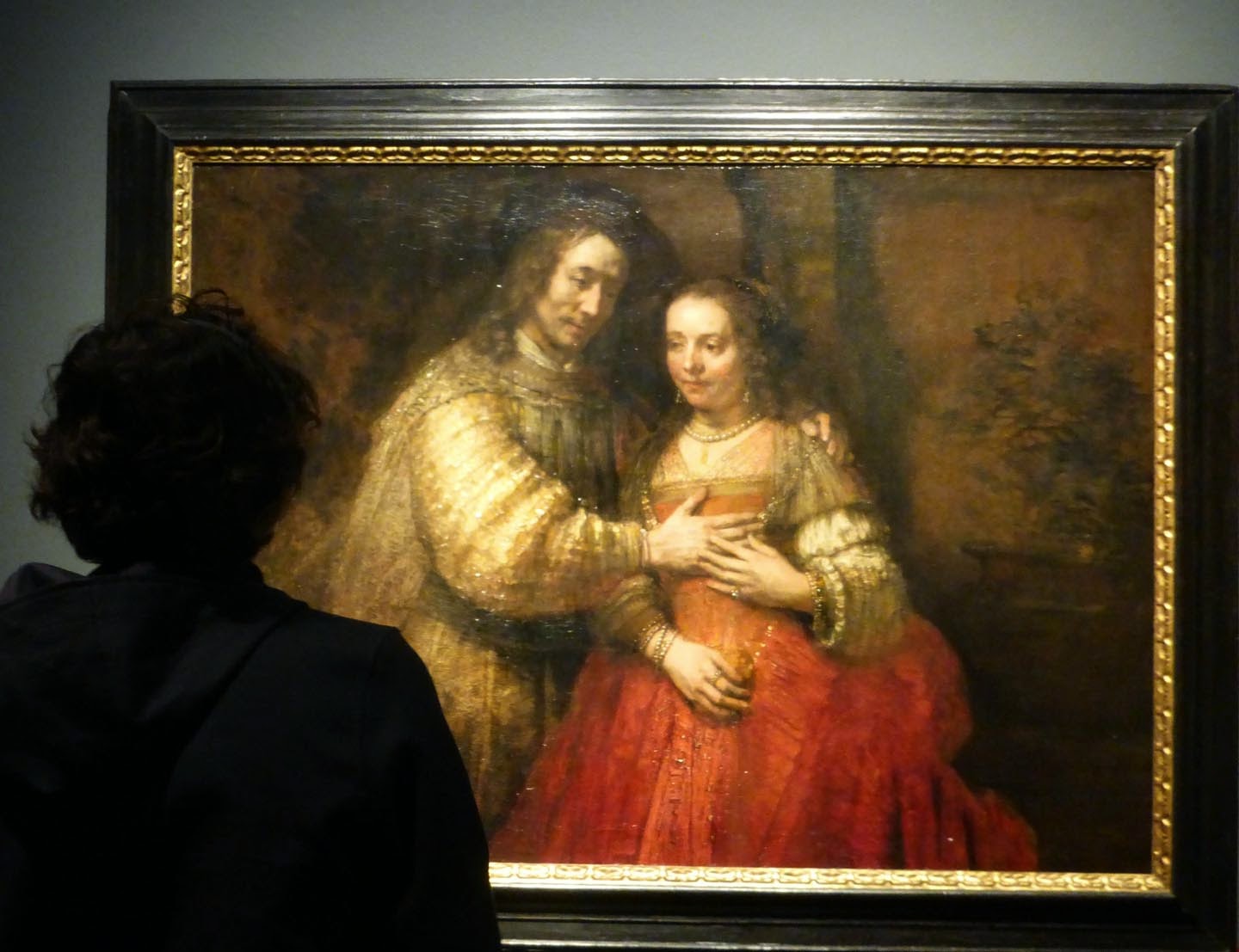 One of the most moving is the so-called Jewish Bride, from about 1665, on loan from the Rijksmuseum, Amsterdam. The lovers embrace in a moment of tender affection, confident and proud to have their feelings captured by the artist. 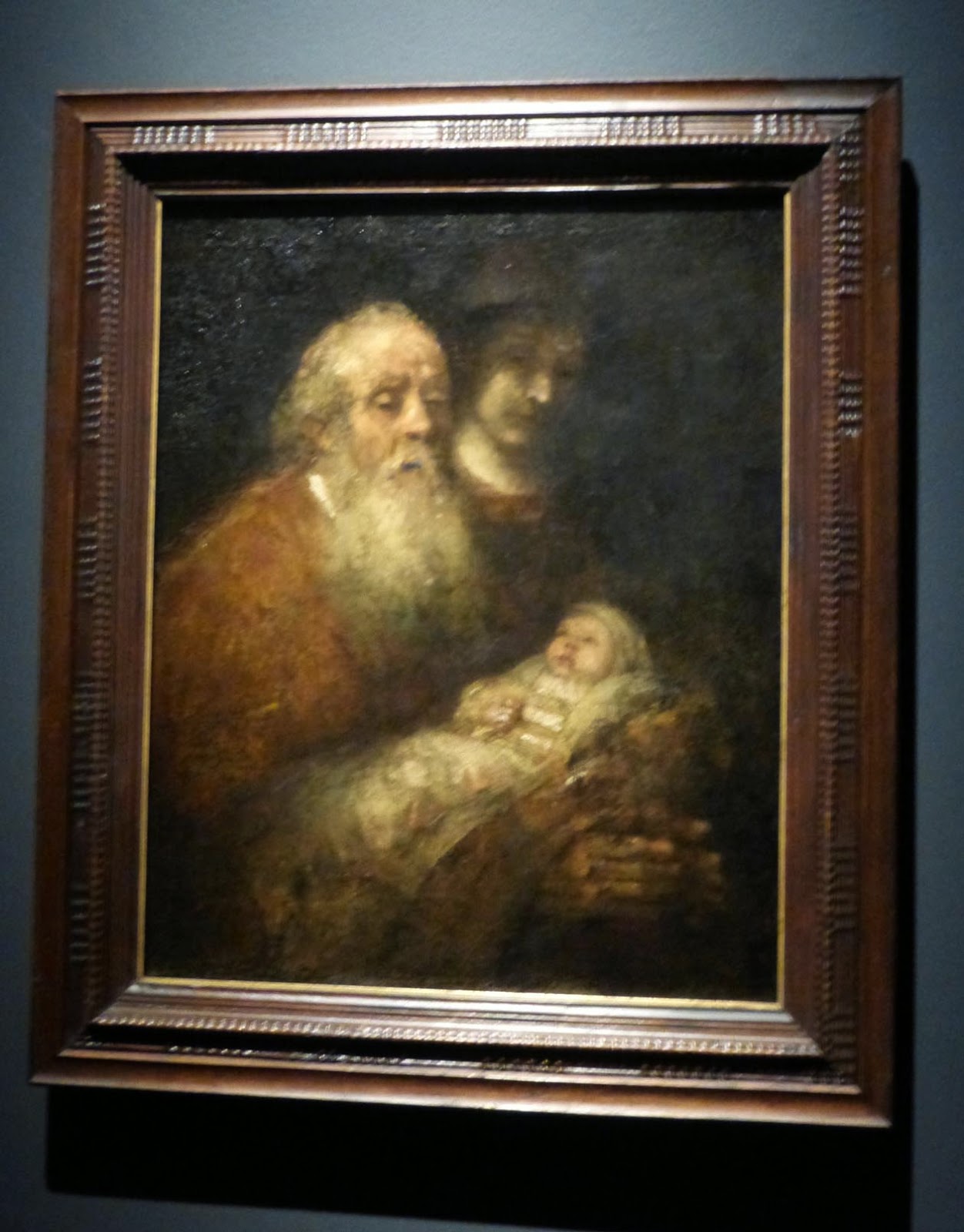 The final painting, left unfinished at Rembrandt’s death three years later, is Simeon with the Infant Christ in the Temple. Here the old man, eyes almost shut, carries the child in his arms – the start of a new biblical era. 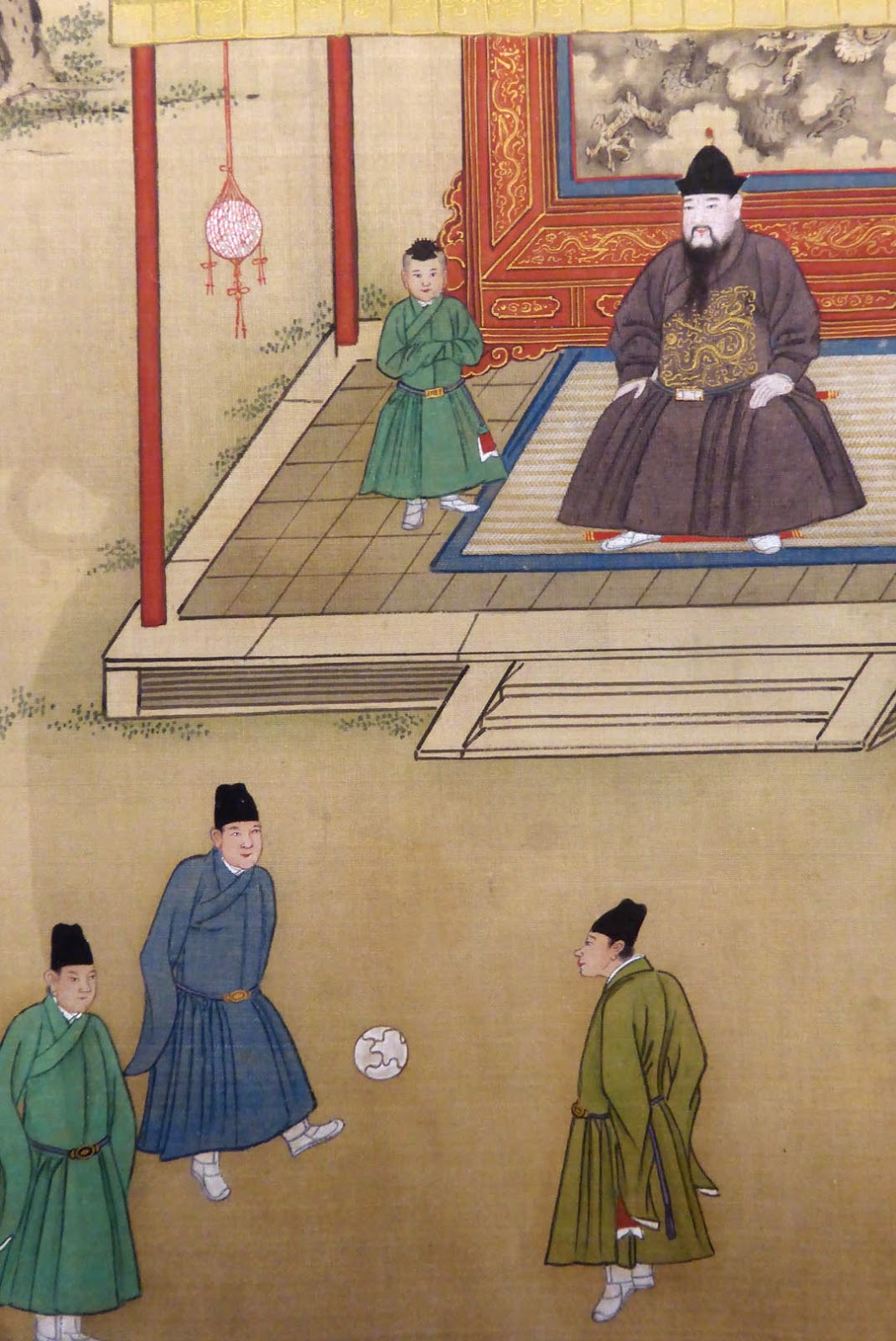 This was a golden age in China’s history. Between 1400 and 1450AD China was a global superpower run by one family – the Ming dynasty – who established the capital in Beijing and built the Forbidden City. Four emperors ruled during this time, and treasures from princely tombs illustrate the richness and variety of their costume, jewellery and furniture.This painting shows an emperor watching a football-like game, meant to strengthen leg muscles and increase agility. 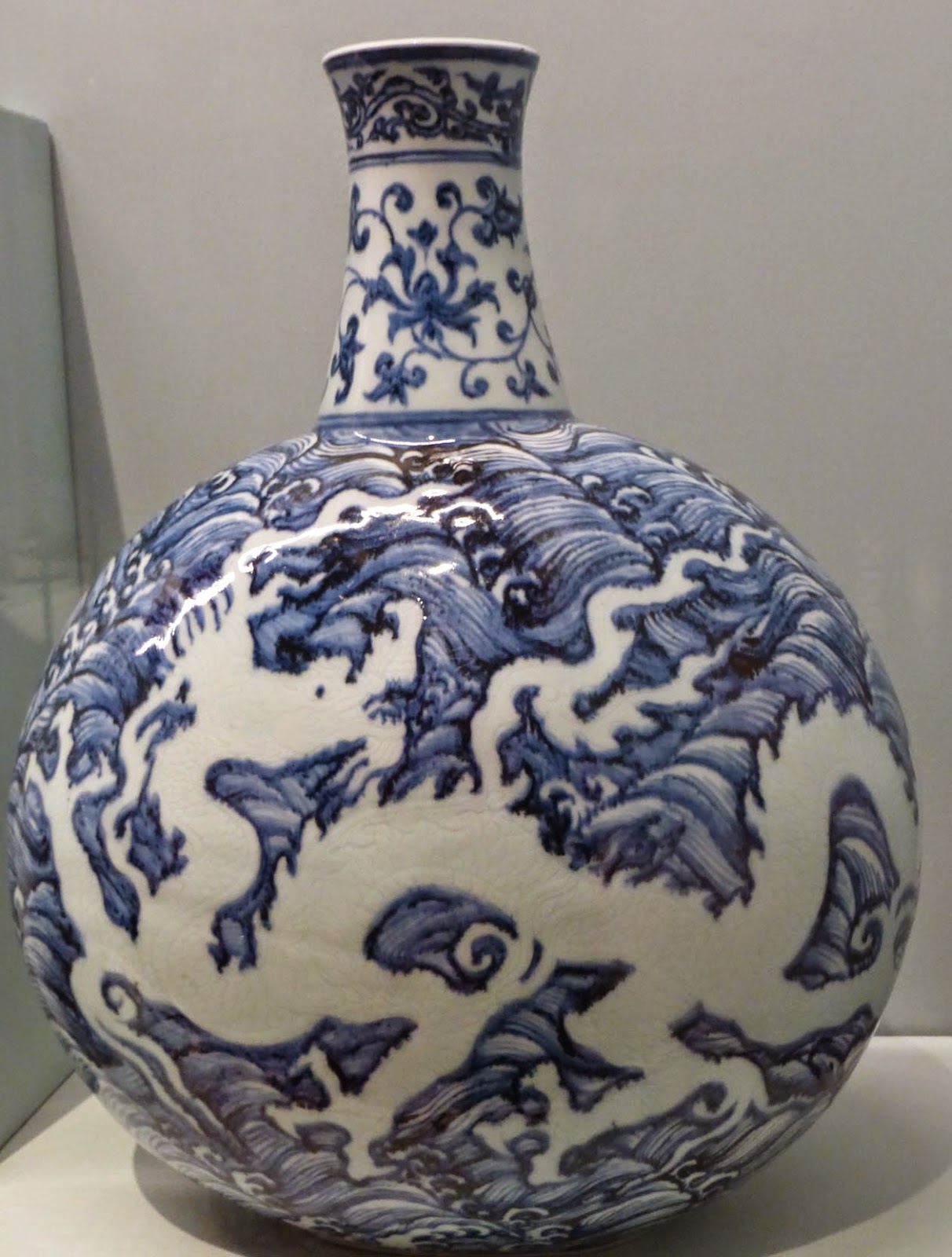 This period also saw the admiral Zheng open up his country, sending treasure ships to Southeast Asia, the Middle East and Africa. The trading relationships that were established influenced taste in an increasingly wealthy society. This porcelain flask dating from 1403-24 was inspired by a Middle Eastern shape. 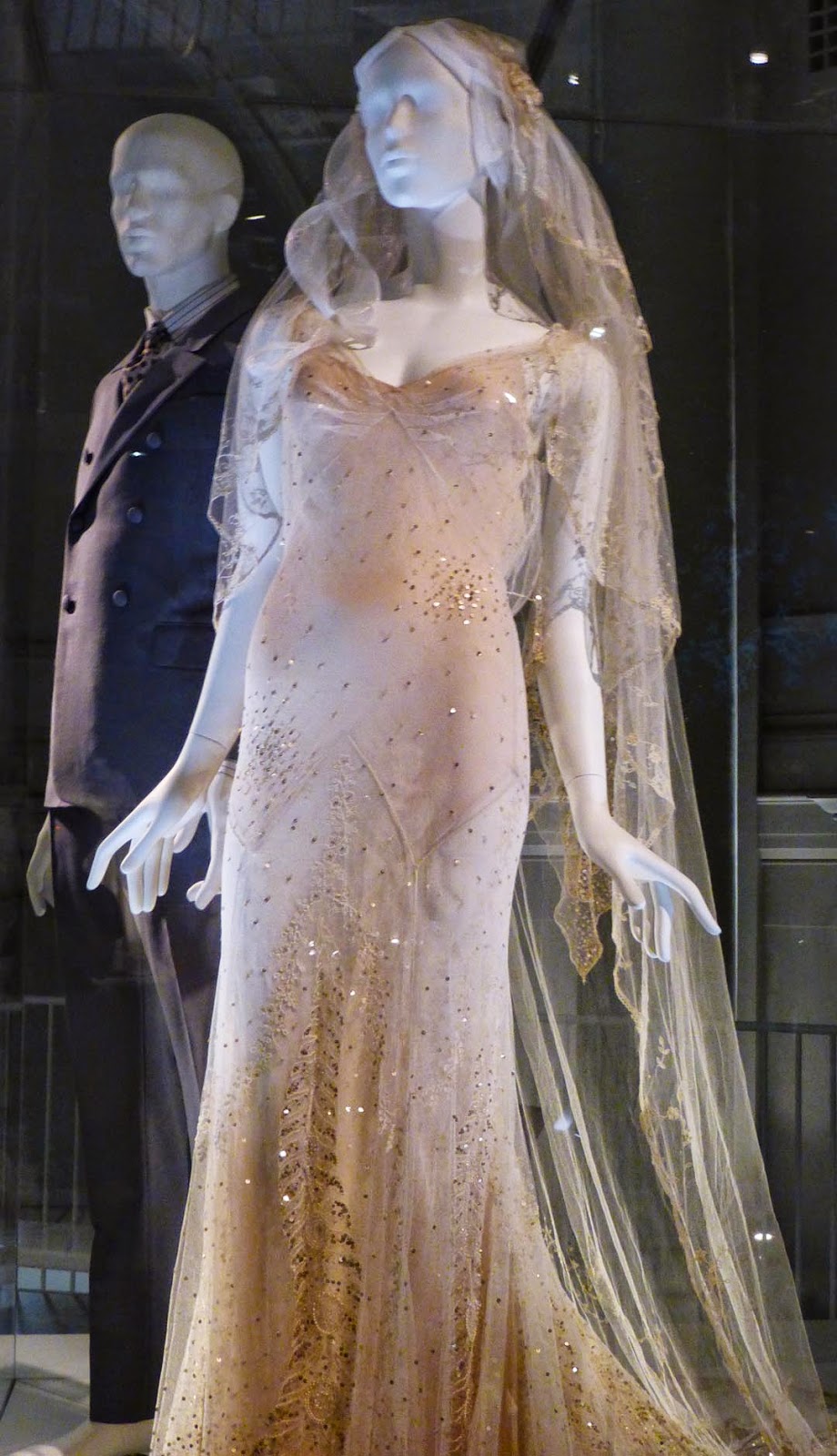 Two floors of exquisite outfits, lovingly preserved by their wearers and descendants.  They chart the development of wedding attire through history, from the floral silk dress worn with a straw hat by Jane Bailey, a wealthy farmer’s daughter in Hampshire in the 18th c to those worn by Camilla Parker Bowles, later Duchess of Cornwall,  and Kate Moss when she married Jamie Hince (left). Designers featured include Norman Hartnell,  Belville Sassoon, Vivienne Westwood, Vera Wang and John Galliano. 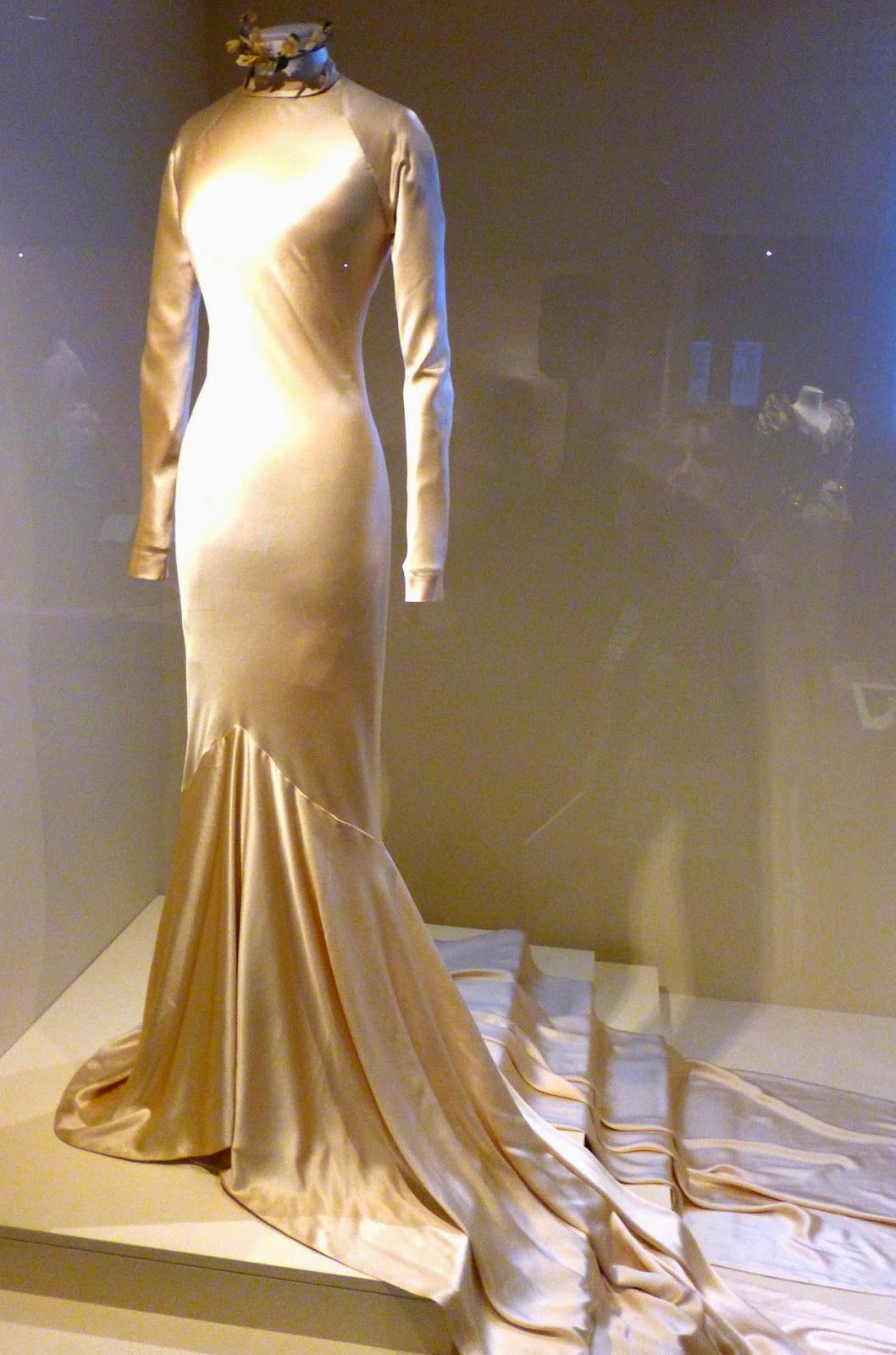 The exhibition shows the celebrity wedding is not a modern phenomenon. When Margaret Whigham (later Duchess of Argyll) married Charles Sweeny in 1933 her fans brought traffic to a standstill for three hours outside the Brompton Oratory in West London. It’s doubtful if many of those who caught a glimpse of the bride would have been able to copy her extravagant outfit though: the dramatic train stretched for 3.6 metres, and the dress occupies a whole showcase. 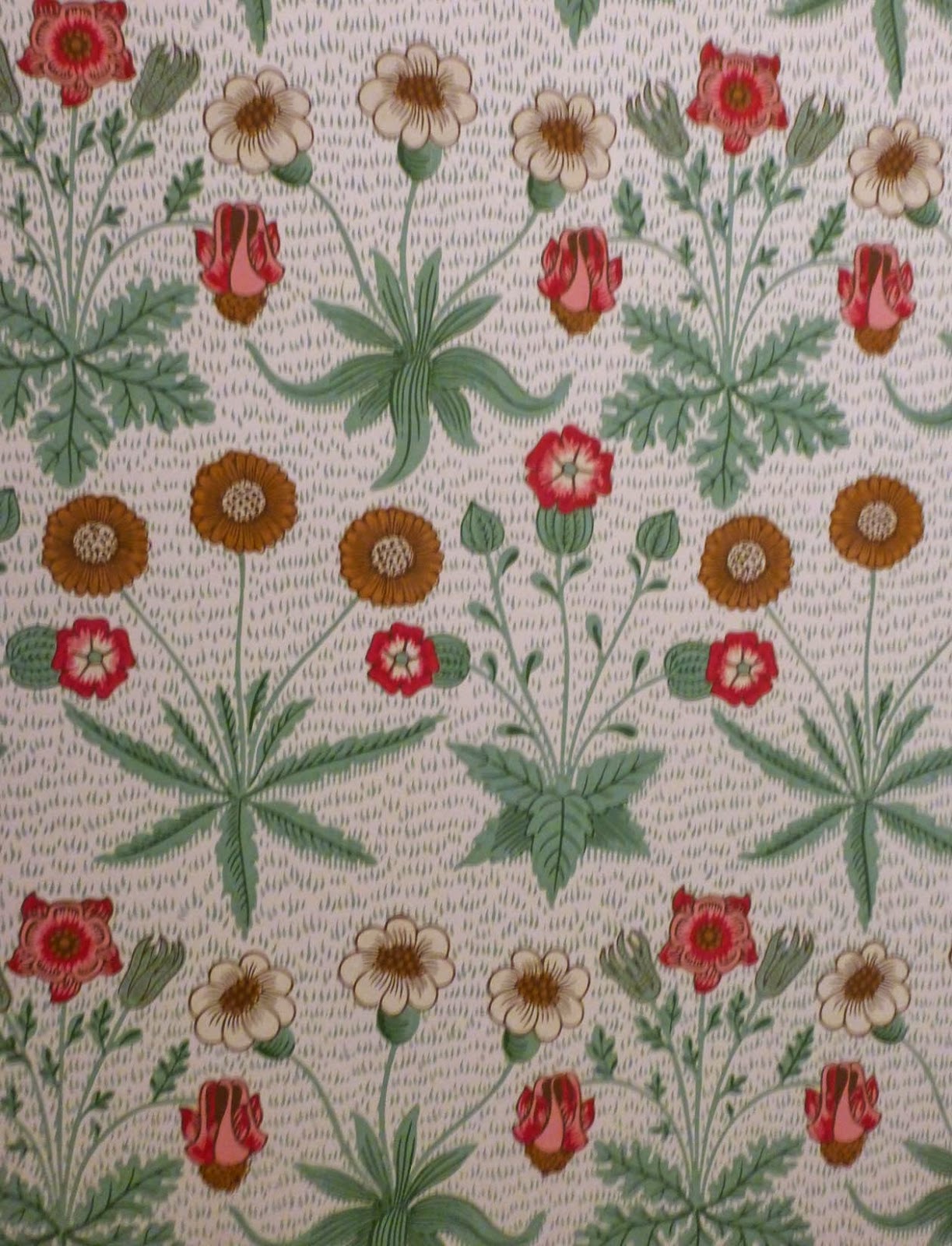 Morris’s advice, “Have nothing in your house that you do not know to be useful, or believe to be beautiful”, still holds good more than a century later. This exhibition brings together his politics, thought and design with portraits, furniture, wallpaper (left: his first, Daisy), books, banners, textiles and jewellery. (The ‘anarchy’ comes from his links with Russian anarchists and support for trades unions, women’s education and suffrage.) The work of his inner circle, including the potter William De Morgan, architect Philip Webb and furniture makers Ernest Gimson and the Barnsley brothers, is also displayed. 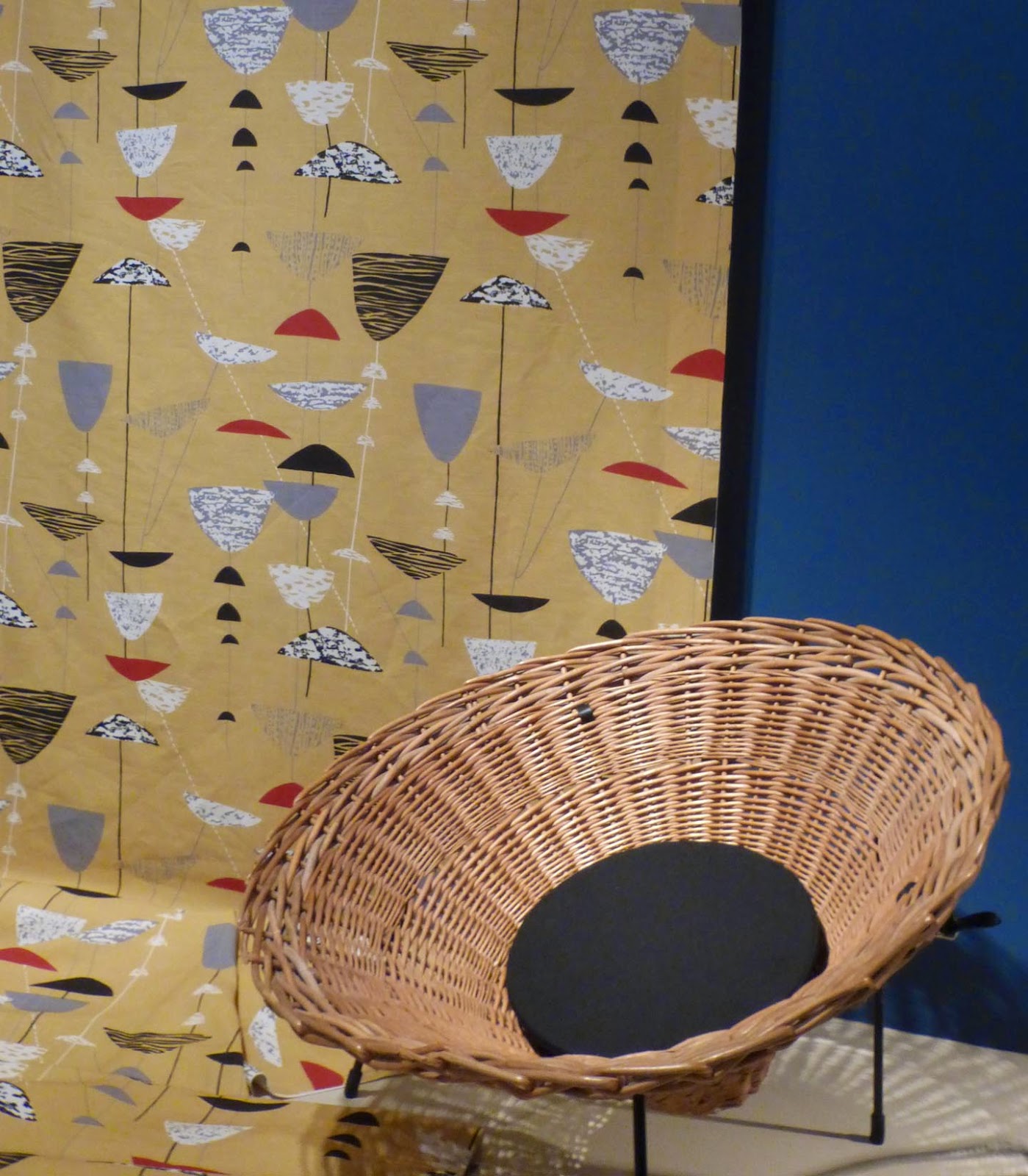 The exhibition shows his legacy in a display on the Garden City movement and the way in which ‘good design’ became available to a wider market through pioneering home furnishing shops such as Ambrose Heal’s. This continued with the Festival of Britain in 1951 and the government-sponsored Council of Industrial Design. And to bring it up to date – Sir Terence Conran worked as an assistant to one of the Festival of Britain designers. One of his own chairs is featured in the exhibition (left).

Lest we forget - Poppies at the Tower of London 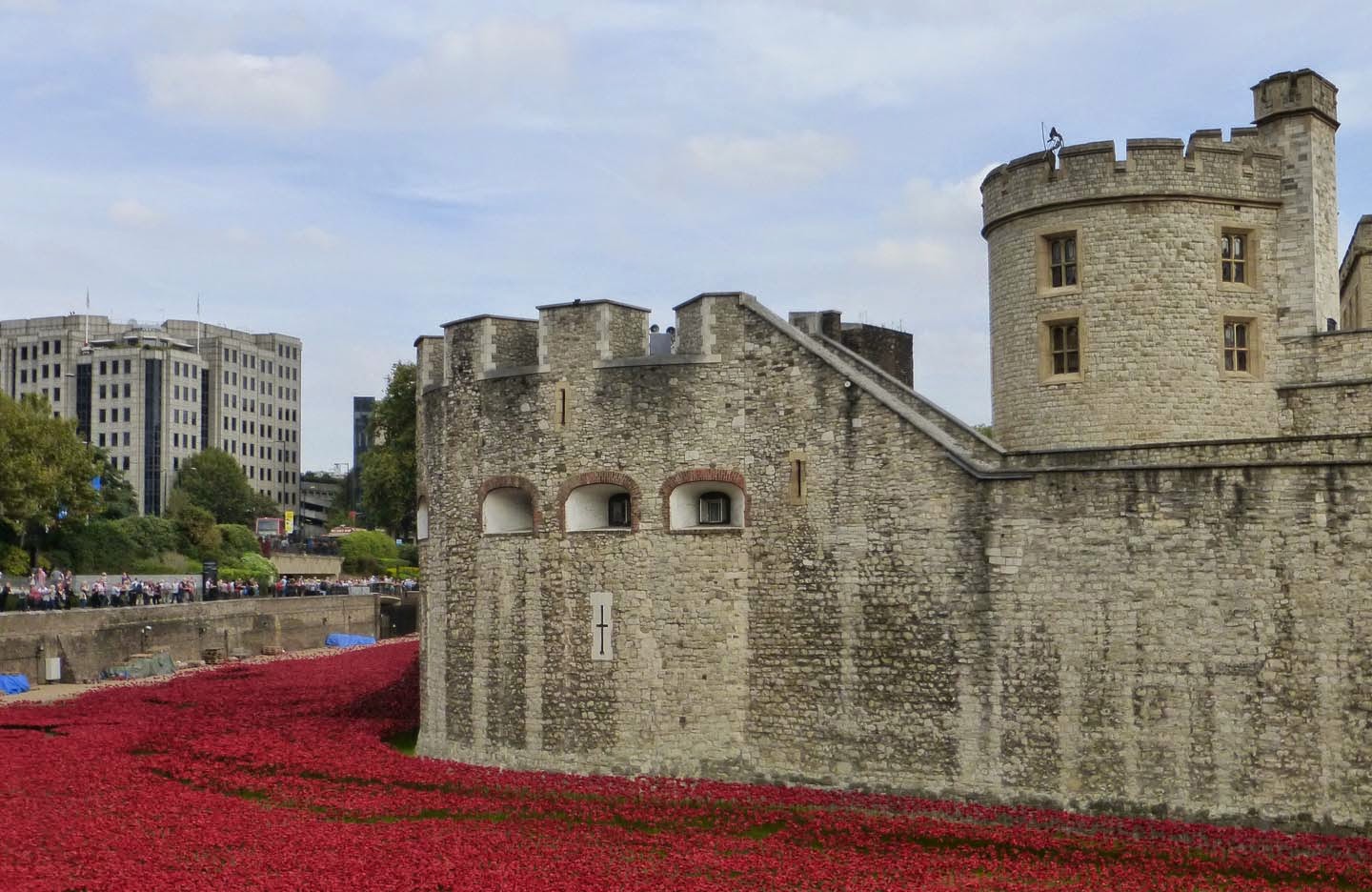 Lance-Corporal Donald Salisbury Hunter was 25 when he died from wounds and pneumonia on Oct 30 1918, just 12 days before the end of World War 1. One of the 888,246 troops from Britain and the colonies who gave their lives in the conflict, he had been a member of the 13th Reinforcements, New Zealand Expeditionary Force, and was wounded twice, first in the Somme, secondly in France, two months before his death. His distraught family in Dunedin were unable to mourn at his graveside, but last month his brother's granddaughter, Judy Newhook, on the last day of a visit to Europe, remembered him as she stood in silence at the Tower of London. Before her, in the moat, was a scarlet field of ceramic poppies, each flower representing one of the fallen. 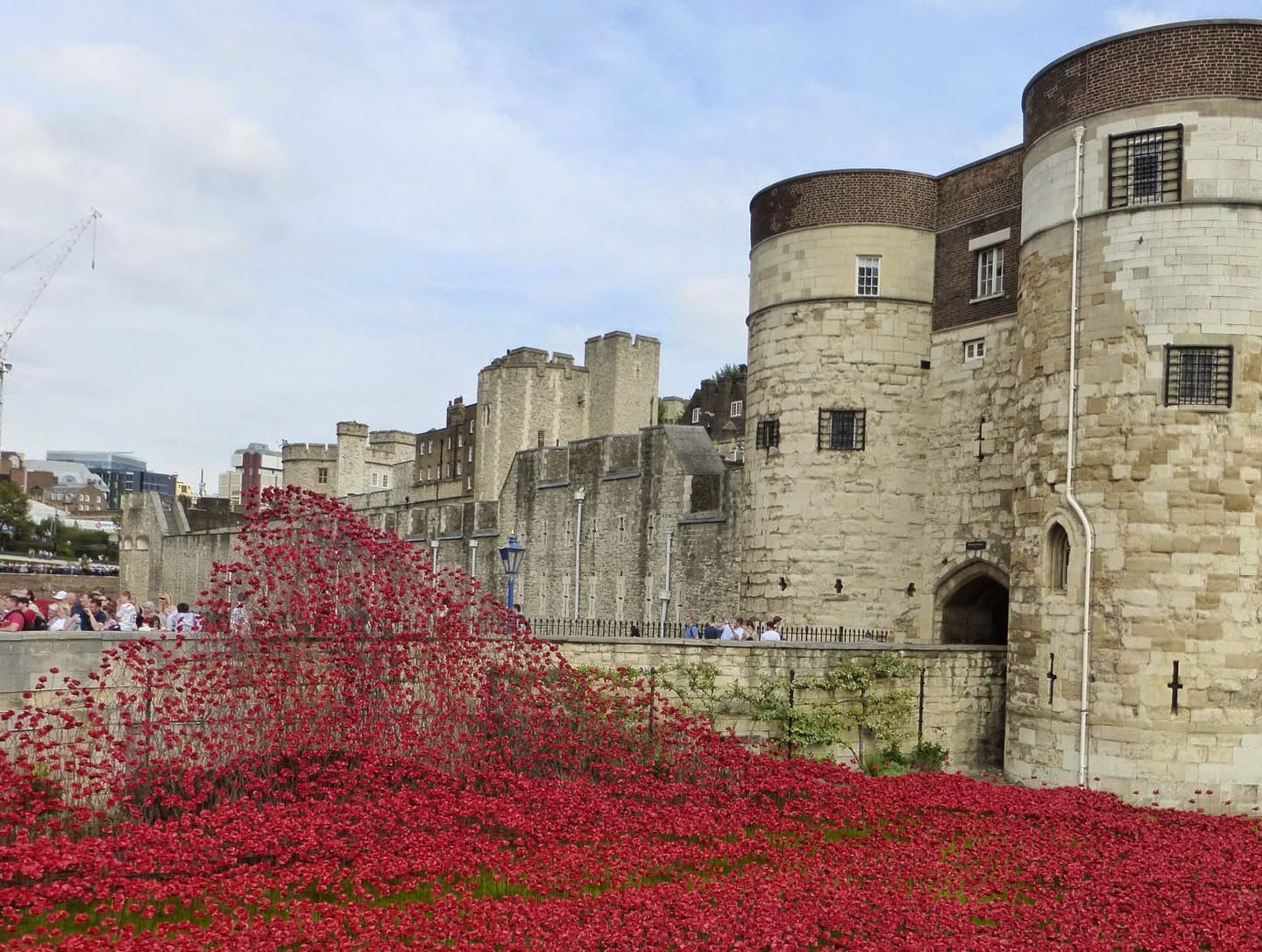 The installation, Blood Swept Lands and Seas of Red, was created to mark the 100th anniversary of the Great War. The hand-made flowers were for sale for £25 each, with proceeds going to six service charities. Among the first to plant a poppy back in August were Prince William and the Duchess of Cambridge, along with Prince Harry. The day after Judy’s pilgrimage, the Queen and Duke of Edinburgh were at the Tower to pay tribute and lay a wreath, and by the start of November, visitor numbers were estimated to have reached some four million. Many were there at sunset each day to hear the names of 180 of the troops killed read out as part of a Roll of Honour, followed by the Last Post.
All the poppies had been sold well before Judy's visit. The last one will be symbolically planted on Armistice Day, November 11, after which the installation will be dismantled and the flowers cleaned before being dispatched to their owners.