The reedbeds that are saving the Lea Navigation 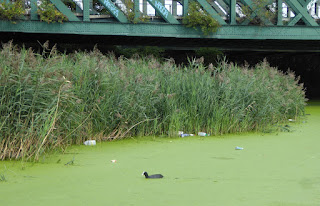 After walking the length of the Lea Valley, it was fascinating to learn more about the river from water level, thanks to a Thames21 tour of reedbeds to the north of Bromley-by-Bow. It turns out these reedbeds are a valuable weapon in the ongoing effort to clean up a once highly polluted waterway. I’d seen traditional ones (above), but hadn’t realised what an amazing job they do of reducing pollution: the Lea Navigation is full of toxic ammonia. Reedbeds convert this into nitrate, which is safer – a great way of improving water quality. 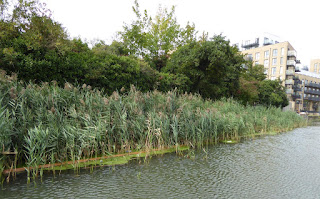 The reeds that Thames21 plant aren’t in the actual river bed, but grow in coir matting that floats on the surface, inside a bumper (above). The roots hang down into the water, adding to the surface area. They are easier to maintain than the traditional beds, which can expand to take up too much space. As well as reducing pollution, the reeds oxygenate the river, allowing fish to flourish, and attracting wildlife such as watervoles and birds, including kingfishers and swans. 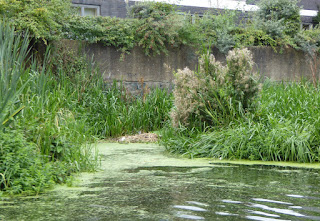 One reedbed we passed had a massive indentation, where you could see the remains of a swan’s nest – the cygnets now well on the way to adulthood, and probably those we saw out on the water with their parents. 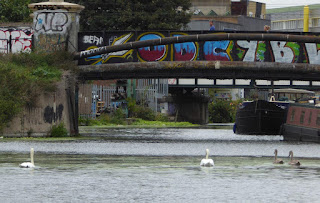 Thames21 is a charity that works with communities across Greater London to improve the rivers, canals, ponds and lakes (see link below). It's already brought 600 m of new reedbeds to Lea, and plans are in hand for more. (Local residents were asked to vote where they should go.) It welcomes volunteers for its many projects, and has a regular newsletter. 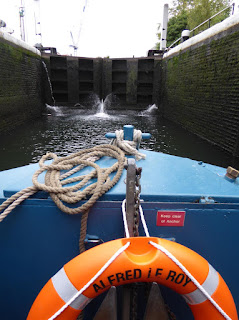 Our excursion, on the aptly-named Alfred le Roy (King Alfred defeated the Danes further up the river) took us through Old Ford Lock No 19 (above) before ending at Hackney Wick. The event was part of the annual Thames Festival, which runs for the whole of September. https://www.thames21.org.uk/
http://totallythames.org/

Walking the Lea Valley 11 - From Ware to Hertford 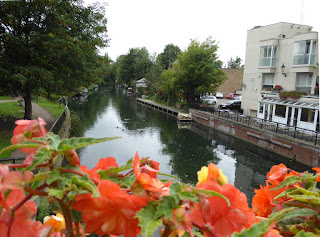 The final leg of our rambles along the Lea Valley brought us gazebos, a historic school, a bed mentioned by Shakespeare, a floral bear and even a buzzard. 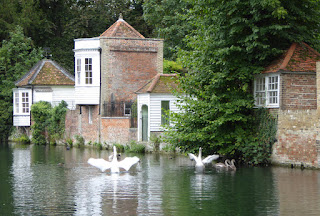 The gazebos were a surprise. They line the river, and were mostly built in the eighteenth and nineteenth centuries by innkeepers whose establishments ran along the High Street, and who sought to provide quiet areas for leisure and refreshment away from the coaches and carts. (Ware was an important stop on the Old North Road, being less than a day from London.) In the 1850s there were 25 of them. After World War II, they fell into disrepair because of threatened demolition for a proposed service road between the High Street and the river. Luckily the threat was eventually lifted and restoration began. 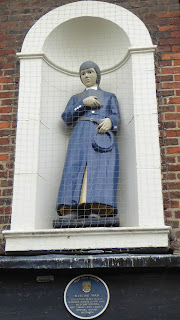 Behind the High Street we found a yard with the figure of a Bluecoat pupil over it. This led to a charming public garden in front of the 14thc manor house that served as a Bluecoat charity school from 1685 to 1761. 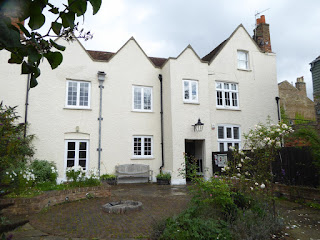 An adjacent row of cottages provided accommodation for 150 boys and the nursemaids who looked after them. Today the manor house is cared for by the Hertfordshire Building Preservation Trust. 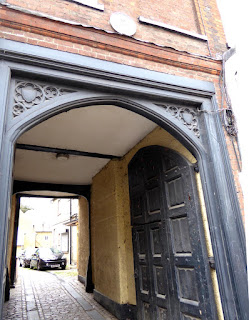 More reminders of Ware’s past were all along the High Street – blue plaques marking the passageways that used to lead to the stables of the coaching inns. One commemorates the White Hart, now demolished. This was the home of the Great Bed of Ware, built in 1580 by a Hertfordshire carpenter, Jonas Fossbrooke. More than three metres wide and publicised as being able to sleep 12, it was said to draw travellers to break their journey there, just to spend a night in the bed. Its fame even led to a mention in Shakespeare’s Twelfth Night. Now a prize exhibit at the Victoria and Albert Museum in London, in 2012 it returned to Ware Museum for a year, thanks to a Heritage Lottery Fund grant. 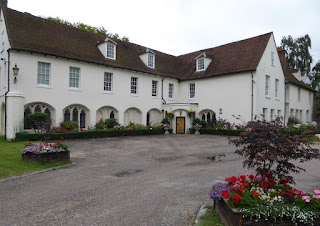 Ware also has an ancient priory, founded by the Franciscans in 1338. It became a private residence with the Dissolution of the Monasteries under Henry VIII and is now a wedding and conference venue. 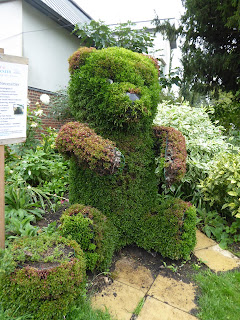 In the surrounding gardens was an enormous floral bear, part of the Ware in Bloom initiative. 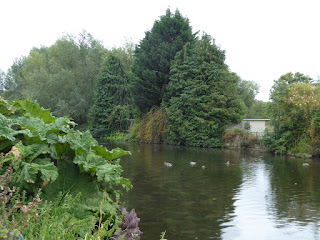 The path took us back to the river, where mallards foraged for food around huge gunnera plants. A few of the trees that line the banks were just starting to show the first signs of autumn. 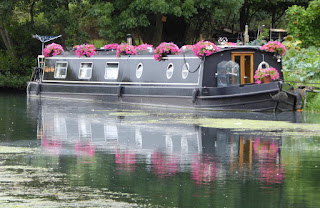 Houseboats, however, were still ablaze with summer flowers. 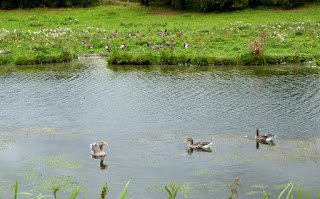 The surrounding meadows were full of Canada and Greylag geese. 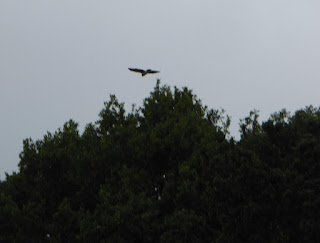 One of our group identified a buzzard’s call (they sound like a mewing cat) and finally spotted it hovering over some the trees. 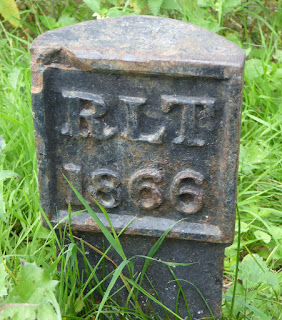 When we reached Hertford Lock we were intrigued by this metal plaque beside the towpath, and its letters, RLT. Our guesses as to what they represented were right – later investigation showed it was a boundary marker put up by the River Lee Trust in 1866, probably to mark the realignment of the Lee Navigation. 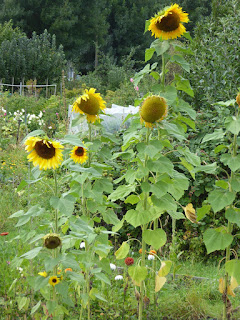 As we approached Hertford itself, allotments appeared and the waterway became crowded with boats. 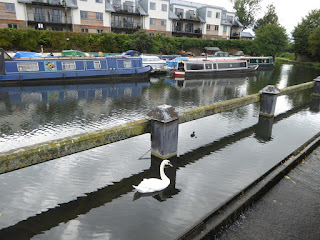 We walked into Hertford, which we had visited early on in our exploration of the valley (see http://greenjottings.blogspot.co.uk/search?q=hertford) and returned to the historic Salisbury Arms Hotel for a very welcome pub lunch. Then it was back to Hertford East station, and the train home.

Is this London's oldest mulberry tree? Inside a protective fence in the grounds of historic Charlton House in south-east London stands a mulberry tree. Gnarled and sprawling, it's said to have been one of the 100,000 mulberry saplings  planted as part of King James I's attempts to start a silk industry. His wife, Queen Anne of Denmark, herself established a mulberry plantation at Greenwich Palace. Charlton House (below, with its imposing Gateway Arch) was being built at the time for Sir Adam Newton, the tutor of their son, Prince Henry. However, there was one problem: the trees the King provided were black mulberries, and not the white ones that silkworms prefer. But over the years the Charlton House tree flourished, providing shade and an attractive feature for the garden. 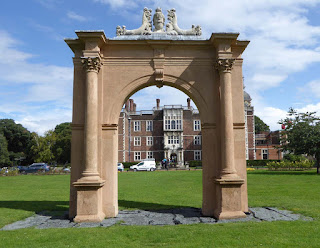 Although a thriving silk industry did grow up some decades later, it centred on Spitalfields in east London and used mostly imported raw silk. Today, mulberry trees can be found across the capital, many planted in Victorian times. The fruit ripens in late July and August, but is seldom imported as it perishes soon after picking. The Charlton tree still bears a crop, and this features in the summer desserts served in the house's Mulberry Cafe.
Mulberries have been grown in London for centuries - they were first introduced by the Romans - and a  recent survey identified more than 135 sites with mulberry trees. While most date from more recent times, there's one in the Queen's Orchard in Greenwich Park that might have been planted by Queen Anne. But was the Charlton House tree put in first? We may never know.
Charlton House is free to visit.
Charlton Rd, London SE7 8RE  Ph 020 8856 3951
https://www.greenwichheritage.org/visit/charlton-house

Dawn brought magic to Kensington Gardens on the last day of August. As people marking the 20th anniversary of the death of Princess Diana began coming to lay flowers at the gates of her former home there, first light saw the nearby Round Pond cloaked in a cloud of mist. 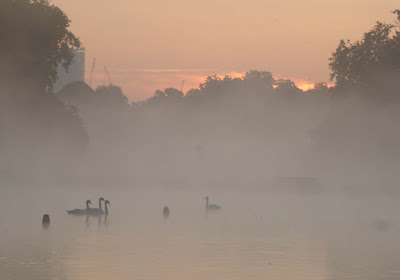 As the sun began to rise, the swans emerged. Then a skein of geese arrived, honking as they flew. It was hard to believe this tranquil scene was in the centre of London. 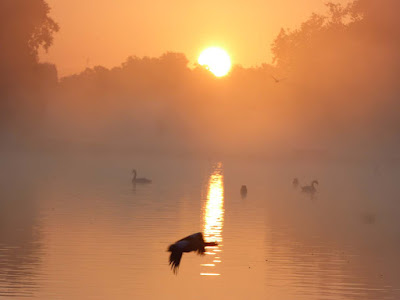 Within a few minutes the mist had lifted, the sky was blue, and the rest of city was waking up. But what a beautiful start to a very poignant day.
Posted by sandra at 09:09:00 No comments: