Walking the Lea Valley 4: Graffiti, grebes – and a Victorian scandal 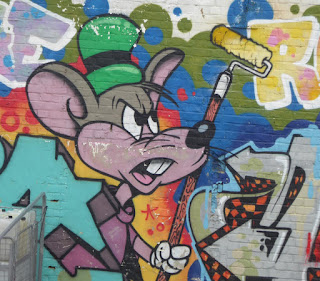 The area around Hackney Wick station, where our latest ramble began, has perhaps the highest concentration of graffiti and street art in London. Everywhere you look, the buildings are covered with brightly coloured paint. 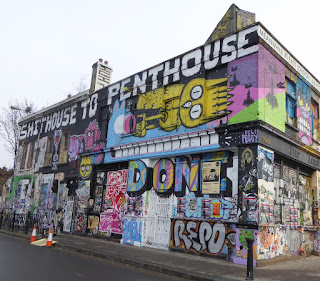 Even the derelict Lord Napier pub has not escaped. Some decorations are crude, some are fun and many are beautifully executed. They are constantly changing, and have become such a landmark that websites are devoted to them. 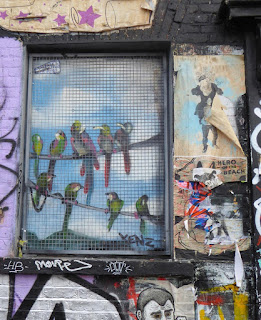 It’s all very gritty and urban, but turn a corner, and the green spaces of the Olympic Park and the Lea Valley come into view. 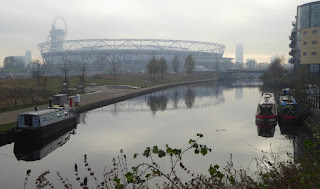 The towpath is home to many new developments, but street art does continue. 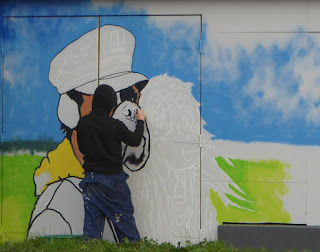 We saw one artist hard at work, beside a huge mural of some soulful-looking dogs. 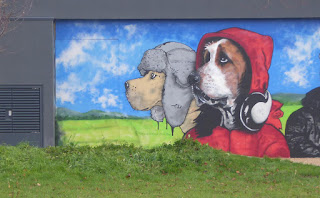 This stretch of the river is home to dozens of canal boats, and is overlooked by a new apartment block that has been built on the site of the former Lesney Matchbox toy factory. 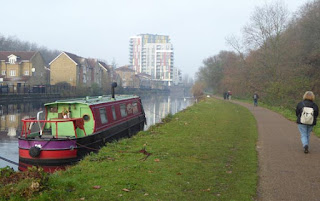 This was founded in 1947 by Leslie and Rodney Smith (not related) and in 1966 employed more than three and a half thousand people, many being bussed in by a dedicated fleet of vehicles. Sadly, by 1982 demand for the tiny toys had slackened and the company went into receivership. The Matchbox name was sold and the factory demolished, but Lesney is commemorated in the name of the new building. 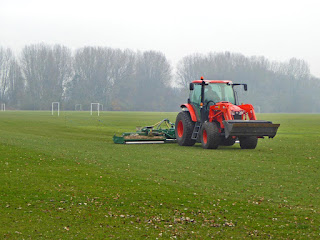 The next stretch of water took us past the wide open spaces of Hackney Marshes, extensively drained in medieval times and now filled in with rubble – much of it from buildings destroyed during WWII. These were once Lammas lands, cultivated by their owners from April 6 to August 12, and available for commoners to graze cattle for the rest of the year. Today, the 336 acres, carefully groomed, are  home to more than 80 football, rugby and cricket pitches.

We paused at the Middlesex Filter Beds nature reserve - the relic of an attempt to provide clean water after a major cholera epidemic in the mid 1800s. Closed in 1969, it's now a thriving mixture of open water, reed beds and wet woodland habitats. At the centre of the reserve a child was playing in what looked like a prehistoric henge, but is actually a sculpture by Paula Haughney -  Nature’s Throne - made from huge granite blocks salvaged from an old engine house.

The reserve is said to be home to more than 200 plant species, and some 60 types of birds. Not many of these were in evidence on this grey December day, but we did spot some grebes (above), and later saw a cormorant drying its feathers. 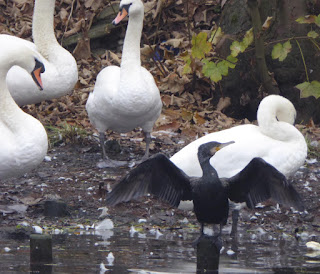 Further along the river there was a heart-stopping moment when a fox came into view, slinking along the towpath behind some swans. They ignored him, and luckily he went off in search of easier fodder. 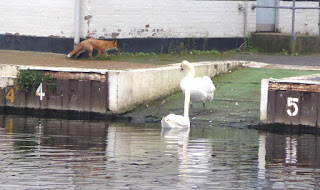 Our next stop was by a series of arches that now support the Overground railway. 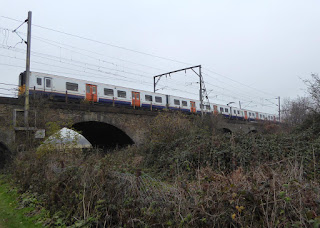 At first sight, they seem quite unremarkable. But a closer look reveals a plaque that relates how here, under two of them, aviation pioneer Alliott Verdon-Roe assembled his Avro No 1 Triplane, and on July 12 1909 wheeled it out to make the first all-British powered flight. The plane managed just 15 metres but it was a start, and later Avro planes served both World Wars – the Lancaster was used in the Dambusters raid. Verdon-Roe was knighted in 1928, and in 1963 Avro merged with Hawker Siddeley Aircraft. 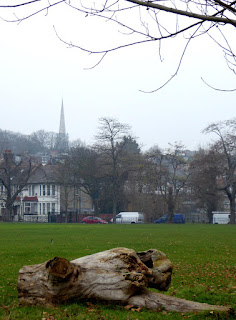 The final leg of our ramble took us past Springfield Park, from where we could see the spire of the Cathedral Church of the Good Shepherd, which began its life as the Church of the Ark of the Covenant for the Agapemonite (Abode of Love) sect. It was hard to reconcile this peaceful suburban scene with the discovery that this building was linked to a scandal that shocked Victorian society. The sect had been founded in Somerset in the mid 19th c by Henry James Prince, a defrocked Anglican clergyman who claimed the Second Coming was imminent and that he was the visible embodiment of the Holy Spirit. His followers included many wealthy spinsters who were encouraged to hand over their earthly possessions and become ‘spiritual brides’. (He lived in comfort, surrounded by the most attractive of the women, while the others worked in the gardens or on his farm.) Despite his proclivities and numerous scandals (the family of one young follower kidnapped her, then had her declared insane and incarcerated in a lunatic asylum), the sect continued, and in 1892 relocated to Clapton, where Prince commissioned the Gothic Revival-style church we could now see. He surprised his followers by dying in 1899 (they thought he was immortal) and was hastily buried in the front garden in the middle of the night. He was replaced by the Rev John Hugh Smyth-Pigott who recruited some 50 young female followers to supplement the ageing population of Agapemonites, but after his death in 1927, the sect gradually declined. The building was used by the Ancient Catholic Church for a time, and became the Georgian Orthodox Cathedral in 2011. The carvings and stained glass are said to be worth a visit, but sadly we’d run out of time, so had to turn away from the Lea and head to Tottenham Hale and the Tube home. 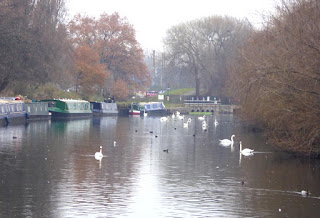 For more Hackney Wick graffiti see https://inspiringcity.com/2016/02/29/street-art-and-graffiti-in-hackney-wick-is-this-the-new-shoreditch/
And there's also a lot more about the Agapemonites on http://www.utopia-britannica.org.uk/pages/abode%20of%20love.htm