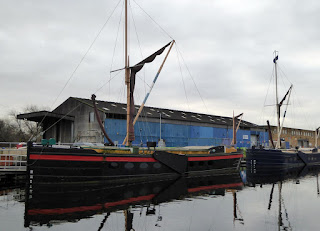 A walk along the Lea Valley offers many glimpses of the area’s industrial past. But I was unprepared for the sight of two traditional powder barges, the Renaissance and the Judith, moored at Hale Wharf. They floated there, brown sails furled, looking as if they’d just unloaded a cargo of gunpowder and were awaiting further instructions. But I later discovered that not was all as it seemed. The two barges are reproductions, based on the design of the last of these sailing barges, the Lady of the Lea, built in 1931. They were commissioned by British Waterways as part of an ongoing regeneration plan for the area. And while their exteriors are traditional, below decks they apparently offer modern commercial space for anyone who fancies a memorable home for a business. 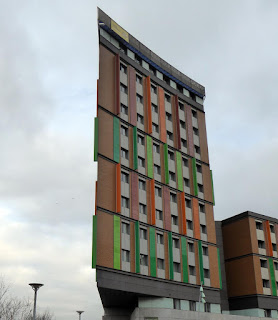 Regeneration is the buzz word along the Lea - the barges will soon be surrounded by up to 500 new homes. We saw more evidence of this when we started our walk at Tottenham Hale. Almost the first building we came across was this colourful apartment block, on a site where once stood the Gestetner duplication machine factory, opened in 1906 and until the 1970s employing around 6000 people. 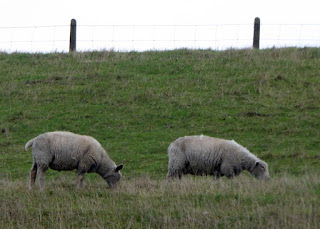 The Lea at this point runs alongside a series of reservoirs, which provide 10% of London’s water. They’re surrounded by high banks where sheep graze peacefully. 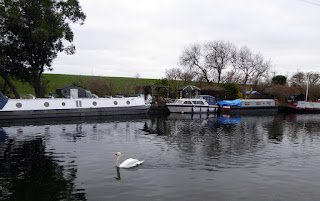 Despite the icy January weather, there were plenty of birds about, perhaps hoping for scraps from the few canal boats that were still occupied. 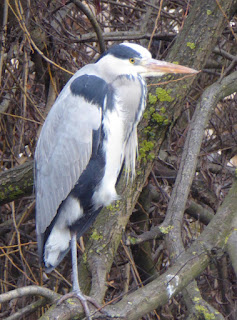 This heron, sheltering among the bushes, had its plumage fluffed up to keep warm. 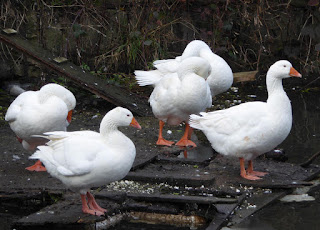 Further along was a flock of geese. 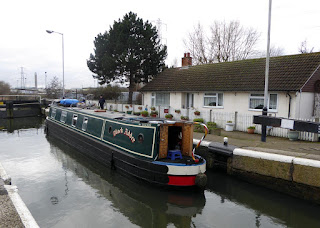 We paused at Pickett’s Lock, named after some early inhabitants, the Picot or Pickett family, who were descended from one Picot de Marisco (of the marsh), who lived locally in the 13th century. In 2015 it was temporarily renamed Alfie’s Lock in honour of former lock keeper Alfie Saggs. The new name is still in evidence and a sign outside the lock-keeper’s cottage reads Alf Saggs, Best Man on the Lea. 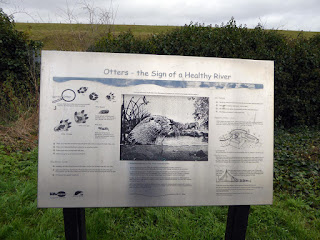 Further along, an information sign told us the river is so healthy these days that otters live there. Well, we did keep our eyes open, but they probably saw us first. 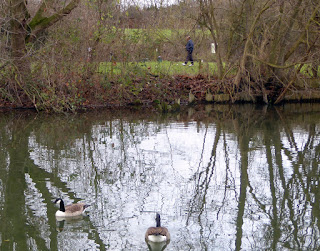 We passed the Lee Valley Athletics Centre, opened in 2007, and could just make out some hardy souls enjoying a round of golf on the neighbouring course. 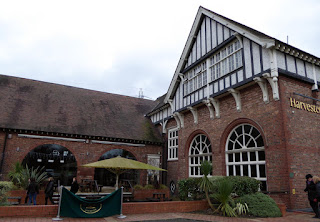 Our walk ended with a  very welcome lunch at the Harvester, housed in what started life back in 1899 as the Ponders End pumping station. The name, Ponders End, is another one that goes back a long way. A John Ponder is mentioned in a decument of 1372 and the surname is believed to mean a keeper of, or dweller by, a fish-pond or mill-pond. There’s been a mill here since at least the late 16th century and possibly as far back as the time of the Domesday Book (1086). The mill came under the control of George Reynolds Wright in 1870 and today Wright’s Flour Mill is Enfield’s oldest working industrial building. 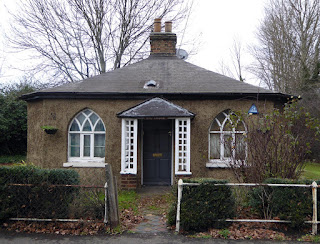 Our final stop was by the entrance to the mill, to admire this charming Georgian lodge which may once have housed the miller.Lovely to see it still seems to be lived in.
Posted by sandra at 18:41:00 No comments: