An Autumn Odyssey to Savill Garden 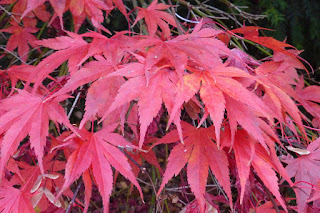 As leaves began turning to fiery reds, oranges and yellows, members of our garden club had a group visit to the Savill Garden at Egham in Surrey. Created by Sir Eric Savill in the 1930s out of a corner of Windsor Great Park (once William the Conqueror’s hunting ground), it has 35 acres of interconnected gardens, designed to provide colour and interest all year round. 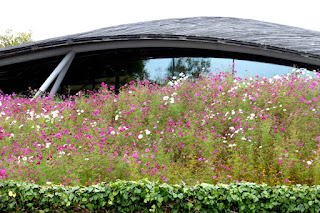 Our first glimpse of what was on offer was the still-flowering meadow of pink and white cosmos outside the impressive visitor centre, opened in 2006 by the Duke of Edinburgh. The building blends beautifully into the landscape; timber for the floor and swooping roof came from the Windsor Estate. It houses restaurants and gift shops, and we returned there later for a hot lunch and a relaxed browse around the garden-related products. Eric Savill (1895 – 1980) was the grandson of Alfred Savill, the founder of a large firm of estate agents. After taking over the management of Windsor Great Park in 1930, with the encouragement of George VI and Queen Elizabeth, the Queen Mother, he began turning part of the woodland into a place to be enjoyed by everyone, from dedicated horticulturists to families. 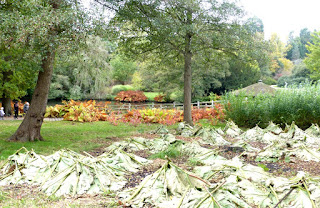 The Savill Garden opened to the public in 1951, and over the years it has grown and evolved. We began our walk by one of the lakes, where gunnera leaves had been upended to create shelters for the crowns of plants beneath. With us was one of the centre's very knowledgeable guides, who answered our many questions and pointed out some of the garden's highlights, including the extensive hydrangea collection. 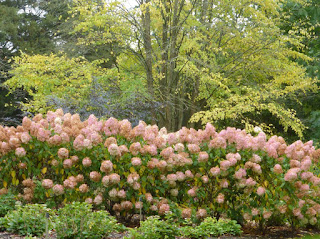 Among the many royal associations is The Queen Elizabeth Temperate House, opened in 1995. It houses a wide variety of tree ferns, but when we were there, pride of place was being given to a display of prize-winning squashes - at over 600 lbs each, rather too big to fit in an oven. 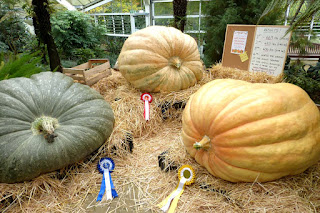 In the Golden Jubilee Garden (2002) was another surprise - a clematis, Madame Edouard Andre, still flowering prolifically. 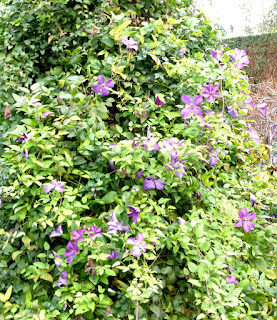 A further splash of colour came from this bed of dahlias. 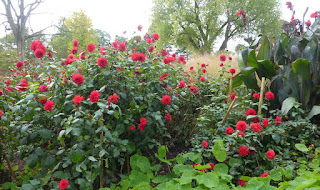 It's obvious that much thought has gone into the planting and the juxtaposition of different varieties  and textures. I loved the stripes of colour lining this path, the black grasses adding a touch of drama. 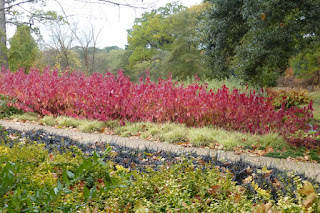 While some of the planting is new, there are also some ancient trees. One of them was almost engulfed by a giant wisteria with tangled and twisted roots that made it look like a jungle escapee. 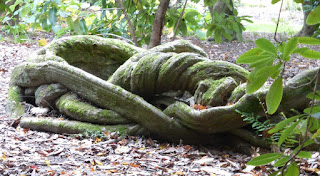 We were too late in the year to see the best of the new contemporary Rose Garden, opened by the Queen in 2010, and obviously missed the rhododendrons and magnolias in the Spring Wood. However, plans are afoot for a further visit next year. 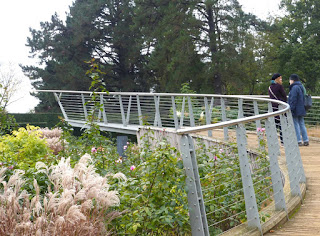