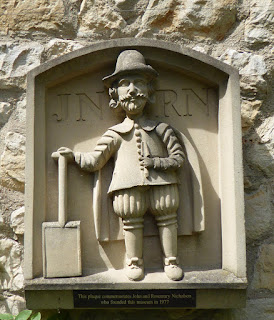 British gardens owe a huge debt to John Tradescant and his son, also John.  Although associated mostly now with  the Tradescantia (Spiderwort) family of perennials, their legacy is much greater. The two were skilled horticulturalists and gardeners but also dedicated plant hunters. During the 17th c, first one, and then the other, went on expeditions to Europe, Russia, the Middle East, Africa and America on behalf of kings, queens and other wealthy clients. They sought out new seeds, bulbs and plants – among them the swamp cypress, tulip tree, yucca and pitcher plant. They also brought back ‘curiousities’ of natural history and ethnography which were housed in the family’s house, ‘The Ark’ in Lambeth, south London, and eventually formed the basis of the Ashmolean Museum’s collection in Oxford.


John Tradescant the elder died in 1638, his son in 1662. Both were buried in the churchyard of St Mary at Lambeth, just south of the Thames. The church suffered some damage during WW2 and was later deconsecrated. 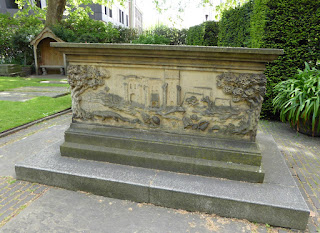 Demolition loomed, but in 1977 John and Rosemary Nicholson stepped in and transformed it into the Garden Museum.The Tradescant tomb (above) has pride of place in the grounds. Nearby is that of another plant collector, Captain William Bligh, who brought breadfruit from the South Pacific and introduced them to the Caribbean (below). 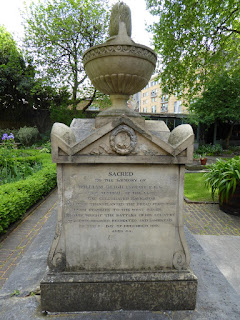 The museum is a tranquil oasis, tucked beside the ancient walls of Lambeth Palace. It celebrates the art, design and history of gardens, with temporary exhibitions about horticulture, a permanent display of paintings, tools and historic artefacts and an education centre. There’s also a cafe with fresh hot food. 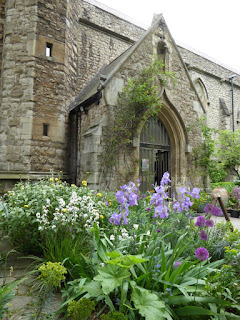 The encircling gardens, tended by enthusiastic and knowledgeable volunteers, are full of colour. At their heart is a beautiful knot garden, designed in 1980 by the museum’s president, Lady Salisbury, which holds an array of 17thc plants that the Tradescants would have recognised. Many are labelled for easy identification, and a selection is usually on sale at the entrance. 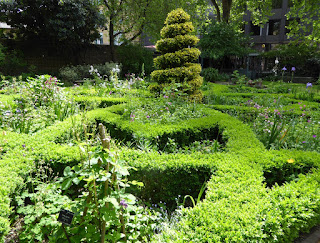 Because of the historic nature of the building – the tower has stone from Saxon times, and the interior was largely remodelled in the Victorian era – proper display space has always been at a premium. 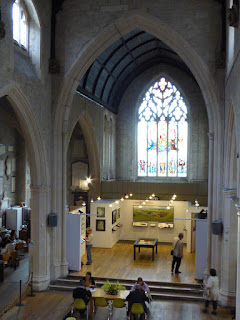 But now a £3.5 million grant from the Heritage Lottery Fund is funding a major redevelopment.. The museum will be closing late summer 2015 and should reopen early in 2017 with more room for the many exhibits currently in storage. A new gallery will be built inside the church, with further facilities around the courtyard, including a new cafe with direct street access and a studio and classroom for school groups, lectures and workshops. The icing on the cake will be a redesign of the garden by Chelsea gold medal winner Dan Pearson, bringing together the knot garden and the churchyard. Hopefully the Tradescant tomb, once hidden in the undergrowth, will be given a setting worthy of the father and son’s achievements. 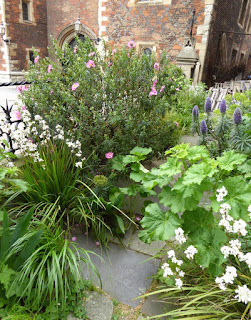 . Historical novelist Philippa Gregory has written two books about the Tradescants, Earthly Joys and Virgin Earth, which portray vividly the times they lived in.
. The 11-acre gardens of adjacent Lambeth Palace are open to the public on the first Wednesday of each month until October, between 1200 and 1500. Admission £4.
http://www.gardenmuseum.org.uk/
Posted by sandra at 19:02:00 No comments: 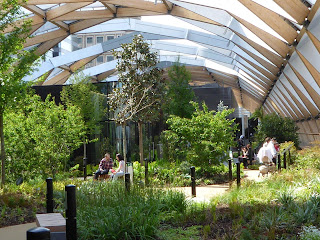 If you find yourself near Canary Wharf in London's Docklands, don't miss the new public garden that's just opened above the Crossrail station development there.


The railway line won’t be up and running until 2018, but the station's first stage – Crossrail Place – is welcoming visitors. There are plenty of shops and restaurants, but it's the roof garden that's got people talking. Under a transparent canopy are hundreds of plants that draw on the area’s heritage as a nineteenth-century trading hub. Many are native to countries visited by ships of the West India Dock Company, which unloaded their wares where the station now sits.  They were transported in Wardian cases - mini glasshouses that protected them - and these inspired the design of the transparent roof. 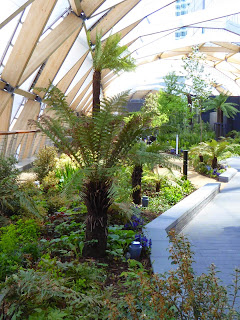 The development sits almost exactly on the Meridian line and the garden designers Gillespies (who also landscaped the Skygarden on top of the Walkie Talkie at 20 Fenchurch St) took this as their inspiration, dividing the area into two geographic zones. Plants from the Western hemisphere such as ferns (left) and Sweet Gum are on that side of the Meridian line, with Asian plants such as bamboos, magnolias and maples on the other. 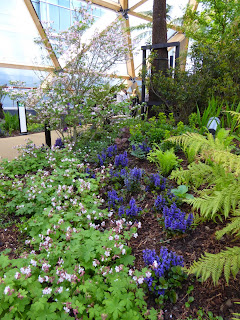 The central area of the garden is open to the sky, allowing in fresh air and pollinating insects. (A bumblebee was busy among the flowers while we were there.)  Paths wind through the planting, and there are benches where you can relax and enjoy the panorama. Descriptive plaques give details about the history of the area and the planting. 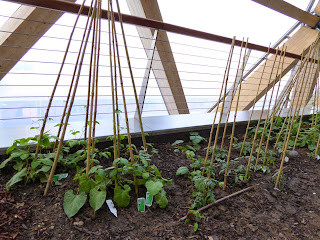 One surprising feature is a vegetable garden, tucked away in a corner. Newly-planted tomatoes, beans and peppers seemed to be thriving.

The development itself is designed by Foster and Partners, and (below) makes a bold  and exciting visual statement in what for many years was a wasteland. Admission to the roof garden is free, and unlike the Skygarden, you visit without booking in advance. 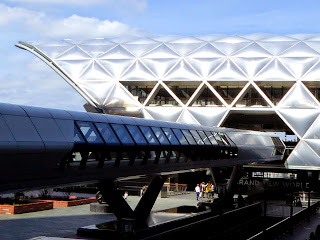 Once complete the 85-mile Crossrail line will stretch from Shenfield in Essex to Heathrow and Reading. Until then an easy way to reach Crossrail Place is the short walk north from the Jubilee line's Canary Wharf station.