What would YOU do with an old shirt??? 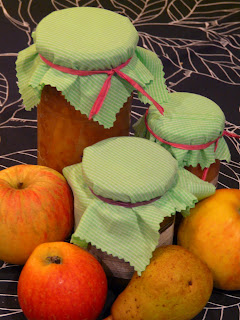 I've just been round to see a neighbour who's had a busy weekend turning apples and pears into jars of golden preserves. She was adding the finishing touch - pretty green covers tied with pink ribbon. And where did they come from? Not a shop, but cut from one of her husband's worn-out shirts. And when there are no jars to be decorated, she recycles what were his favourites into handkerchiefs, so he never really has to part with them.
These three jars were in exchange for some pears pickled according to a River Cottage recipe (not sure yet how they've turned out, as they need time to mature). While the contents will soon be gone, the covers may well grace another batch of jams and chutneys next year.
And a footnote to our 2010 Mapesbury fruit-picking project - we've reached a grand total of 725.8 kg apples, pears, plums, grapes, elderberries and medlars - all produce which would otherwise have gone to waste.
Posted by sandra at 16:29:00 No comments: 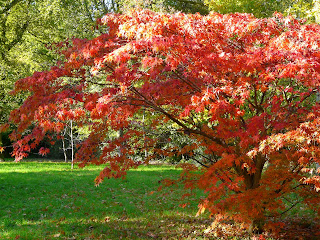 Autumn is the season when the Westonbirt National Arboretum really comes into its own. This week Japanese maples were at their fiery best, glowing in the afternoon sun. A real treat for 'leaf-peepers', and for all the youngsters enjoying their half-term break. 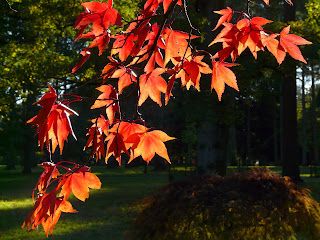 BBC2 Gardeners' World may have been there on the same day. I spotted a fixed camera in a maple glade, and on Friday's programme, there was Carol Klein explaining how the leaves get their colour. 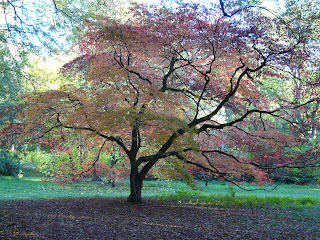 Apparently the reds and golds are there all the time, but overlaid by the green, which disappears in autumn. 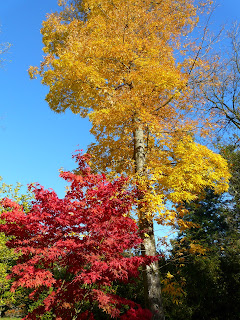 The programme is on BBC iplayer at http://www.bbc.co.uk/programmes/b006mw1h 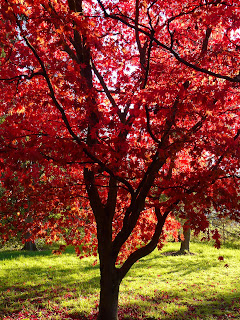 Westonbirt is open all year round, 9am to dusk. http://www.forestry.gov.uk/westonbirt

I woke up this morning to a lawn sparkling with the first frost of the season, and the remaining annuals flopping over. Time to start planning for next year. 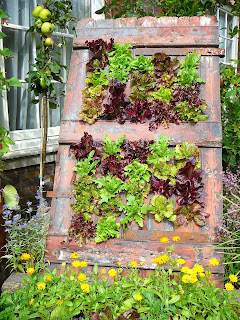 Inspiration will no doubt come from the Garden Party to Make a Difference held at Prince Charles' London home, Lancaster House, last month. Along one wall, a Future Cities Garden designed by Tom Petherick, Adam Hunt and Lulu Urquhart was packed with ideas for vertical gardening in a restricted space. This old propped-up door had become a cascade of lettuces.

A peek behind revealed holes drilled to hold large yoghurt pots which each held a single plant. 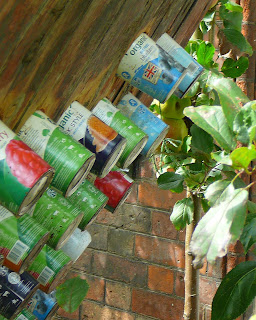 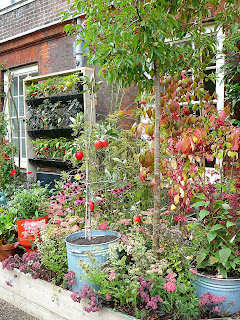 There were rows of shiny red peppers in an upright frame, autumn raspberries growing beneath a standard apple tree, and containers ranging from an old dustbin to large olive oil tins and even a kitchensink. Tom Petherick says the 'stacking' system stems from the homestead gardens found all over Asia.All the plants grown in this way have a use - whether for food, fuel, fodder or shade -  and  thrive in proximity to one another.
By now the royal facade has probably reverted to its more formal appearance, but for the two weeks of the garden party, it intrigued and fascinated visitors. I predict an outbreak of lettuce 'walls' next summer.
Posted by sandra at 10:48:00 No comments: 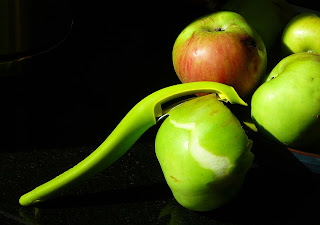 In NW London we're up to our elbows in seasonal fruit - Mapesbury community fruit harvesters have so far picked more than 620 kg that would otherwise have gone to waste, with a similar amount gathered by our sister group in NW6. The best is going to good causes but we're also experimenting with chutney and pickling recipes for next year's local Open Gardens Day. So I was truly thankful to find this new peeler designed by twin brothers Richard and Antony Joseph for their kitchenware company, Joseph Joseph. The curved blade (seen here with some of our windfalls) means it gets round the apple so much faster. Such a simple idea - why didn't someone think of it before???
http://www.josephjoseph.com/
Posted by sandra at 14:49:00 3 comments: