An Open Gardens Day to Remember 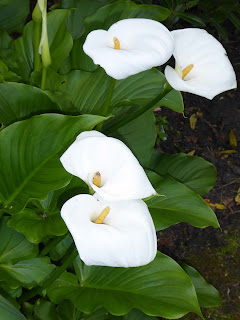 Last weekend saw the Open Gardens Day for our NW2 London neighbourhood. Ten gardens opened to the public – all very different, but equally entrancing, and a tribute to their owners who nurture them with such care and attention. Twenty-five years ago, Chris and Miranda's garden (below) was a building site. It's now a Yellow Book garden, a lush oasis of green with island beds, fish pond and curved borders of perennials and flowering shrubs. 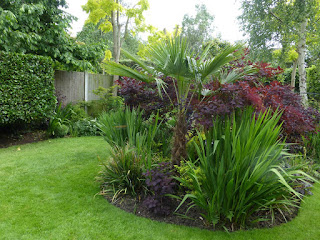 It was interesting to see the different approaches that gardeners have taken when developing their plots. John tends a 'rescue garden', (below) liberated from former freeholder neglect and the result of eight years' work on behalf of the new joint ownership. Whilst it's filled with trees and colourful plants such as clematis and roses,  there's been a concerted effort to attract birds, hence the numerous feeders (below). Among the many avian visitors are four different tits (blue, long-tailed, great and coal), goldcrests, robins, wrens, blackbirds, dunnocks, wood pigeons, greater spotted woodpeckers, and (seen once) a song thrush and a tawny owl. 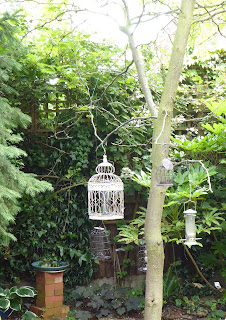 Another garden that is very wildlife friendly has been created by Margaret and John. There are newts and frogs in their two small ponds and various small birds visit the feeders. 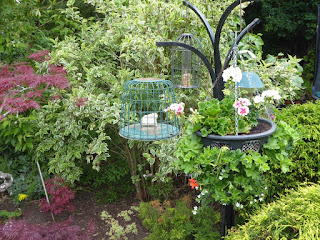 Over the years they have collected some interesting plants and shrubs, including variegated agave, aloe vera, chusam palm,  two sarawa pine grown from seeds, and this lovely feathery aruncus, sometimes known as Goat's Beard. 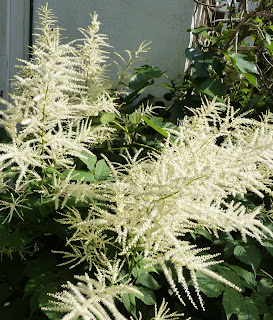 You enter Vanessa's garden through a trio of rose and clematis arches. The centrepiece is a Japanese koi pond, surrounded by seating. Courgettes and cucumbers are being trained to climb up a frame, and a clever collection of stacked containers, tucked behind a bench, provides a plentiful supply of herbs – an idea I took away to try myself. 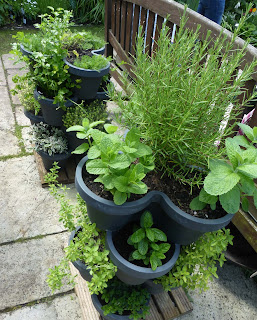 Most of the houses in the area are quite substantial, and many are divided into flats. Kate's garden is shared, with a mature willow tree delineating the border between the two halves. As well as a decked area with pieces of art work and found objects, there are old-fashioned roses, a very old apple tree and lots of perennial plants, many artistically arranged in pots. 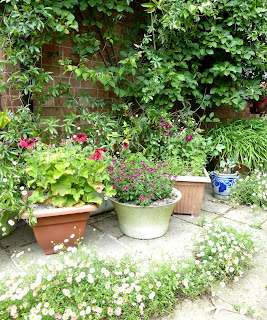 Jan's garden, which is also divided into two, features a walled water feature with native British pond plants and plenty of places to  sit and watch the wildlife. 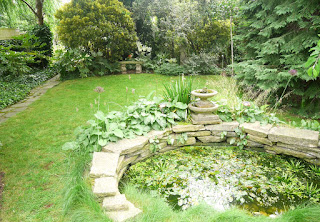 Another garden that invites you to sit and relax is tended by Judy and Val. It's brimming with colourful pots, fruit trees, acers, ericaceous plants, shrubs and trees, all of which can be admired from the summer house or the two paved patios (below). 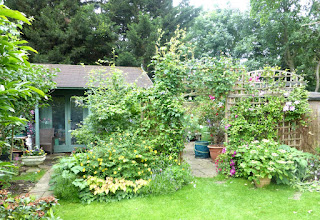 A more formal approach is evident in the tranquil space of  Bob's long back garden, which features mature acers, cypresses and clipped bay, yew and box. Caterpillar control was a hot topic for visitors, who were keen to learn how he was managing to keep his hedging so immaculate. 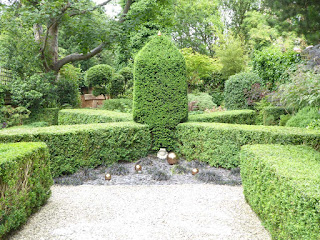 Rosy and David have a garden in two parts - the first area you see is a large patio with borders of mixed planting, overlooked by a Japanese-inspired pavilion that provides a covered eating area for parties. From here you look out on to the dramatic contrast of a bark-covered area of woodland which they call 'The London Secret Garden'. 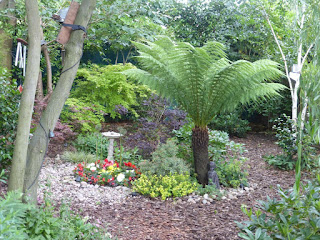 As well as these lovely gardens, visitors also explored the Dell – a  magical garden hidden behind a row of residental houses. At this time of year it's awash with beautiful roses like these. 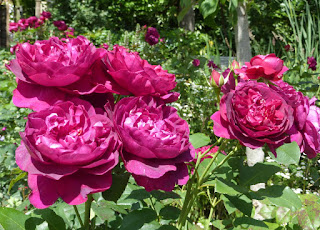 The event is always very much a community affair, with plenty of opportunities for catching up with neighbours and making new friends. Several hundred people stopped off for refreshments in the tea garden, and enjoyed the wide array of home-made cakes that were donated. 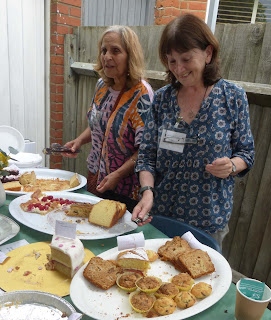 A treat for the more adventurous was a chance to ascend to the top of the tower of St Gabriel’s church for a birds-eye view of the gardens. Another major attraction was the plant stall, crammed with hundreds of plants grown for the occasion by neighbours. Brent's new deputy mayor, Lia Colacicco, was among the visitors. 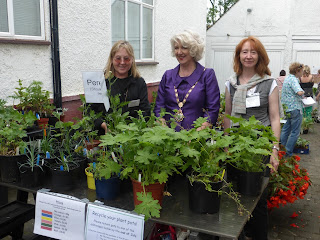 The money raised through ticket and plant sales is going to local charities.The event is organised every two years by the garden club, part of the Mapesbury Residents’ Association, and around 80 people were involved in the planning and preparation. Grateful thanks to everyone for such a memorable afternoon. 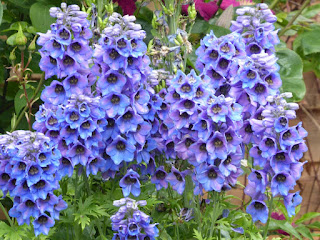 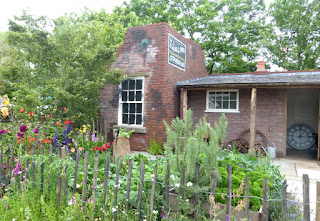 The deluges the country has seen in recent days did not deter the exhibitors at the BBC Gardeners’ World Live show in Birmingham. Clad in anoraks and wellies, they defied the elements to create a series of imaginative and colourful floral displays and gardens bound to inspire the green-fingered. Their rewards came at the NEC on Thursday night, with the announcement of the show garden awards. Platinum, the highest available, went to two designers: Alexandra Froggatt for her “Watchmakers Garden” (also named Best in Show, above) and Lucy Bravington, with Worcestershire-based landscapers DesignIt, for the “High Line Garden”. In her creation, Froggatt pays homage to the show’s host city, with the recreation of a garden typical of the back yard of a craftsman in the city’s historic Jewellery Quarter in the 19th c. 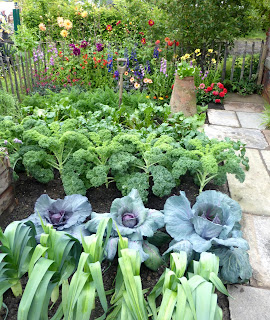 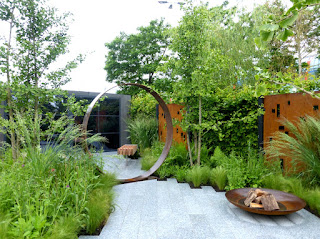 Bravington’s Platinum design (above) was inspired by New York’s High Line – a beautiful garden on a bridge over a disused railway line. She’s mixed trees, perennials and ornamental grasses with industrial steel elements to create a sense of privacy. Gold awards went to Gadd Brothers in the APL Avenue for their “Getaway Garden” (designed for a young professional couple with a small linear garden), and Hana Leonard for “Here we go Round the Mulberry Bush” a garden with a circular theme that is sheltered by an airy tree. 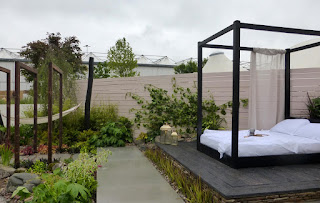 Several of the gardens have an international flavour, among them “A Glimpse of South East Asia” by Timotay Landscapes (above). Filled with colourful tropical planting, it’s a fusion of ideas inspired by the natural landscapes of Indochina.  It features a shallow pebble pool which has beside it a large day bed and a hammock for chilling out (rather damp when I took this photo, but perfect for when the sun finally appears). 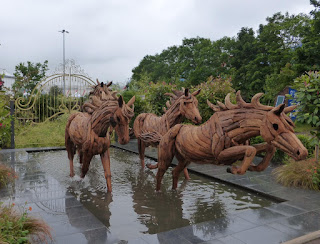 I loved the drama of the four horses charging out of the MS Society Revelation Garden, which won a silver merit, but if, in my dreams, I could chose a garden to take home, I’d go for another Gold show garden award winner, the John Lewis Home Solutions Garden created by Waitrose Partner Shaun Beale (below). 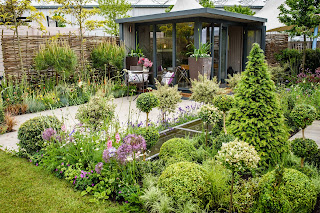 As well as mixing soft and sculptural planting, it has plenty of space for relaxing whatever the weather, with a garden office, water feature, and an eyecatching espaliered hedge for privacy. 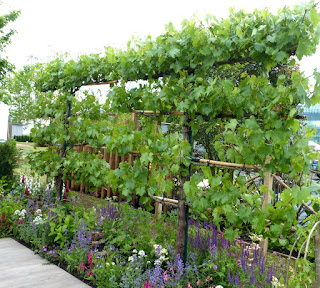 BBC Gardeners’ World Live runs until Sunday, June 16 at the NEC, Birmingham.
Details at www.bbcgardenersworldlive.com
Posted by sandra at 19:55:00 No comments: