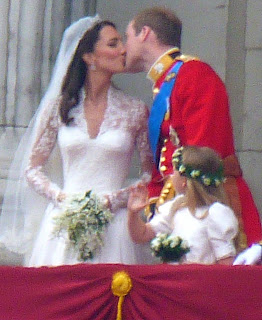 To end the year on a high note – Kate and William’s kiss on the balcony of Buckingham Palace has been revealed as the UK’s favourite TV moment of 2011. I’m not surprised. It was an amazing day, the streets packed with excited crowds cheering and waving. I was right outside the palace, and despite not having a huge telephoto lens ended up with my own version of that iconic moment.
Here’s hoping 2012 will produce some equally good memories.
Happy New Year everyone!!!
Posted by sandra at 19:43:00 No comments:

For a real insight into what London was like in Victorian times, check out the Dickens and London exhibition at the Museum of London. Charles Dickens called the city his ‘magic lantern’ and it became a constant thread running through his novels. (left, Charles Dickens in his study, 1859, William Powell Frith © Victoria and Albert Museum)

“Implacable November weather,” he writes at the beginning of Bleak House. “As much mud in the streets as if the waters had but newly retired from the face of the earth … Smoke lowering down from chimney-pots, making a soft black drizzle, with flakes of soot in it as big as full-grown snow-flakes — gone into mourning, one might imagine, for the death of the sun..…… 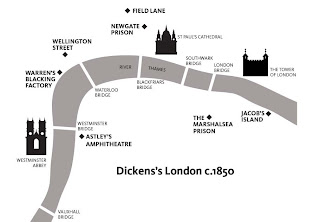 This exhibition puts the author’s words alongside historic paintings and artefacts to create a picture of the sprawling metropolis he knew (left, © Museum of London).

Objects range from a watchman’s box from Furnival’s , one of the old Inns of Court where he had chambers as a young man, to a heavy metal door from Newgate Prison. There are more personal treasures as well – the author’s writing desk and chair, the velvet-covered lectern he used when giving readings, an original manuscript that gives an insight into his working methods, his bank ledger and a collection of boot blacking pots of the kind he stuck labels on as a child to earn money while his father was in Marshalsea Prison for debt.
Dickens’ was developing rapidly into a modern city with steam boats, railways, the electric telegraph and the penny post, reflected in the exhibition’s paintings and displays. The author was fascinated by all these, but also aware of its dark side – the poverty, prostitution and childhood mortality, which he included in his writing, hoping to raise public awareness. The exhibition includes a Doré etching of an opium den, mentioned in The Mystery of Edwin Drood. (Dickens himself took laudanum, a tincture of opium, to reduce pain and help him sleep.) 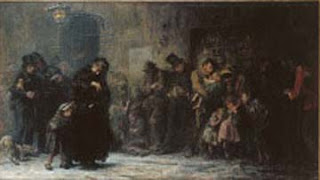 But perhaps the most chilling is a painting, Applicants For Admission to a Casual Ward by Luke Fildes, 1874 (above, © Royal Holloway, University of London). It shows people queuing to enter the workhouse – a place of last resort. In The Uncommercial Traveller, Dickens wrote of the appalling state of one such institution in Wapping, but even as a child, lived in their shadow. One of his childhood homes was in Norfolk St (now Cleveland St, not far from the Telecom Tower), just a few doors from a forbidding brick building which he knew as a workhouse. Throughout his life he worked unceasingly, haunted by the fear of falling back into the poverty he had known in his childhood, eventually driving himself into an early grave. The exhibition ends with a specially commisioned film, The Houseless Shadow, by William Raban. It uses Dickens’ description of a walk through the Victorian city after dark to illustrate images of today’s London. The problems he knew are still with us, 150 years on.

Dickens and London is part of an international celebration to mark the bicenenary of his birth. It runs until June 10 2012. A book accompanies the exhibition: Dickens’ Victorian London, by Alex Warner. 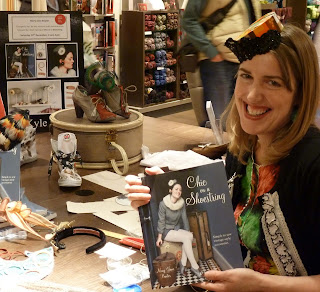 An intriguing party invite arrives, but with the stipulation that guests must wear a home-made hat.

That was the situation two customers in John Lewis in London’s Oxford St were struggling with last weekend. One was thinking of somehow attaching a mini-Eiffel tower to her head (she was French), the other was at a loss until she found that milliner Mary Jane Baxter was in the haberdashery department, showing how to make an emergency hat from a cereal box, scraps of material and some trimmings. These crafty creations had shoppers queuing to try them on and many went away, inspired, with a signed copy of her book, Chic on a Shoestring. (This has instructions for the hat, a feather fascinator, and many more imaginative accessory ideas.)
Their verdict? A lovely present, and great for an inexpensive wardrobe revamp even if there's no party invite on the mantlepiece.
Chic on a Shoestring by Mary Jane Baxter, Publisher Kyle Books, £14.99 (but currently cheaper on Amazon. www.amazon.co.uk/dp/1856269817/ref=asc_df_18562698175679794?smid=A3P5ROKL5A1OLE&tag=hydra0b-21&linkCode=asn&creative=22206&creativeASIN=1856269817 )
Posted by sandra at 15:46:00 1 comment:

Standing room only at the world’s oldest Grand Music Hall 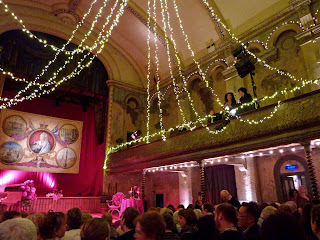 Forget the X Factor. THE show to watch on Sunday evening was at Wilton’s Music Hall in east London, not far from Tower Hill. A capacity crowd cheered, booed and sang along as members of the Players’ Theatre recreated the atmosphere of a Victorian night out, with all the hits of yesteryear. 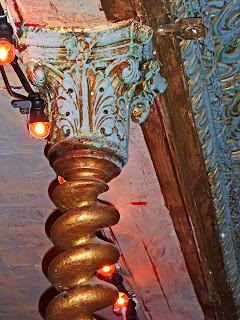 The show was a fundraising gala – although a Trust has saved the building from the threat of demolition, it still needs more restoration work.

The theatre, with barley sugar twist columns and ornate plasterwork, dates from 1858, and in its heyday attracted stars like Champagne Charlie and Arthur Lloyd. (Some say Britain’s first Can-Can was seen there.) But times changed, and by the time the Trust took over, it had gone from housing a Methodist Mission and a rag warehouse to standing empty and abandoned. 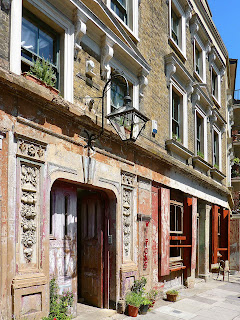 Now, however, the theatre is thriving again, with shows which range from comedy and magic to classical concerts, opera and jive. (See details at http://www.wiltons.org.uk/listings.html ) It still shows its age, but the exposed brickwork and crumbling plaster are all part of its charm. Good acoustics mean performers can be heard without microphones, and the intimate size fosters a real feeling of community and warmth – something more important than ever in these straitened times. It’s not often you can find a show that will appeal to all ages as last Sunday’s one did. And as we all joined in on “Daisy, Daisy” and “When You’re Smiling” I couldn’t help wondering who would remember Amelia Lily and “I’m With You” in 150 years’ time.

There are guided tours of Wilton's on Monday evenings: http://www.wiltons.org.uk/booknow.php?event=guided-tours
(I've just watched the 2002 film version of Nicholas Nickleby and realised that Wilton's features as the Crummles' theatre in Liverpool - those columns are unmistakable. It's also in another 2002 film, The Importance of Being Earnest, with Colin Firth and Rupert Everett.)
Posted by sandra at 16:40:00 No comments: