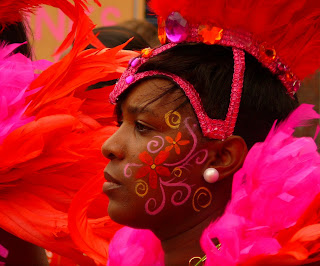 The Notting Hill Carnival, held in west London over two days at the end of August, is Europe's biggest street festival. It attracts up to a million people with its steel bands, massive sound systems,  floats and dozens of stalls selling everything from jerk chicken to corn on the cob. This year's costumes were as eye-catching as ever - a blaze of colour on a rather grey day. Here are some of my favourites. 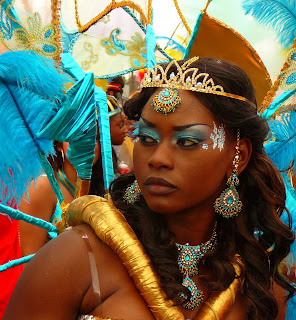 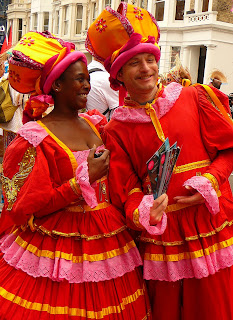 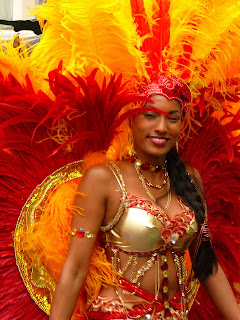 I'm hoping we'll see some of these again at the Thames Festival's  Night Carnival on Sept 11 - another spectacular event.

http://www.thamesfestival.org/weekend/detail/night_carnival2/
Posted by sandra at 18:36:00 No comments: 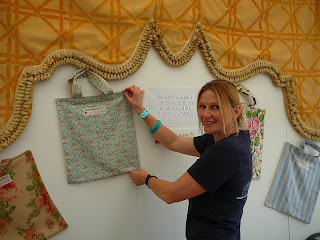 Claire Morsman is a woman with a mission: to get us to swap our plastic carrier bags for reuseable cloth ones.
I met her last year at the “Garden Party to Make a Difference” – a festival of ideas to encourage sustainable living, organised by Prince Charles’s Start organisation and held in the gardens adjoining his London home, Clarence House.
She was there with her sewing machine, showing people how to make simple shopping bags from unwanted fabric such as old curtains – including some donated by the Prince (pictured).
Now she’s back at the 2011 Start festival, being held over the August bank holiday weekend at Kew Gardens, in SW London – and has more royal curtains to turn into bags for visitors.
The idea of creating reuseable carriers from unwanted material came when Claire saw how plastic bags were clogging up the water and killing marine life around the houseboat where she lives. With the help of her mother, she designed a simple bag pattern which her husband put on the internet, and began encouraging people to sew their own. Each bag takes around 15 – 20 minutes, and folds down to a small square which can be kept in a handbag or pocket. She sent one to Prince Charles. He liked the idea, invited her to the Start festival, and donated some curtains to be transformed. Bag-making groups have now sprung up all over the world. Claire keeps track of the number of times the pattern is downloaded, and it’s thought that the 100,000th Morsbag will be sewn up this autumn. The bags are given away free to shoppers (something she calls “sociable guerrilla bagging”) and have potentially stopped millions of plastic ones from going into circulation.
More details, and the pattern, are at http://www.morsbags.com/html/
Start@Kew, with family entertainment and dozens of demonstrations of simple, sustainable living ideas, runs until August 29. Admission is included in the Kew entrance ticket. See: http://www.startuk.org/
Posted by sandra at 00:57:00 No comments: 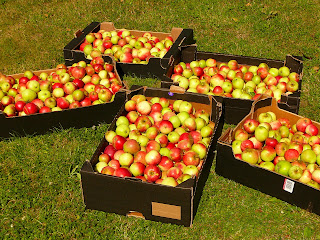 The fruit harvesting season has arrived. So far we’re seeing bumper crops of plums, pears and apples – perhaps because so many pests were killed off by the cold winter. But in urban areas, much of the fruit often goes unpicked because the owners either can't reach it or have too much. To counter this, a network of voluntary fruit-picking groups has sprung up, all with different names, but part of an umbrella movement called Abundance. They gather the fruit, then redistribute it to charities, schools and community cafes on a non-profit basis. It's a very sociable activity - this morning  in NW London, half a dozen of us collected more than 80kg of eating apples from two gardens. 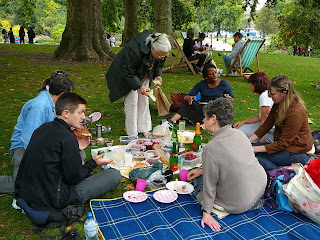 We also try to keep in touch with nearby groups - it's so useful to share experiences.  Earlier this month, pickers from across London gathered for a picnic in St James Park. We sampled each other’s jams, including kumquat and hedgerow, tried fruit leather, and enjoyed a salad with home-grown courgettes and beetroot, Two members also recounted their experiences with organised foraging expeditions for wild food such as samphire and mushrooms.
If you’d like to start your own local fruit-picking group, Abundance Sheffield has produced an on-line handbook:
http://www.cityfarmer.info/2009/07/11/the-abundance-handbook-a-guide-to-urban-fruit-harvesting/ 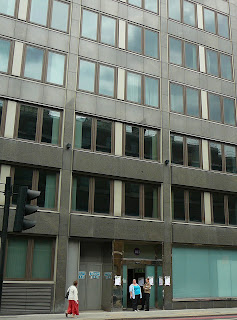 Few visitors to London, walking along Lower Thames Street, would realise that some of the City’s best Roman remains lie beneath their feet. The Billingsgate Roman House and Baths, in the basement of a 1970’s office building, are not usually open to the public. But during the recent Festival of British Archaeology, experts were on hand to welcome the public to this rare, hidden treasure (left).

The house was possibly an inn or private residence and dates from the 2nd century AD. The baths were added later, perhaps because of customer demand. It’s a rare example of a building in use until the early 5th century AD. Being by the Thames, it was probably frequented by sailors, traders and visitors. Bathers would alternate between cold, warm and hot rooms before cooling down with cold water and massaging oils into their skin, then scraping off the excess. It seems to have been a budget, rather than a luxury, establishment – the floors were covered with basic tiles, not costly mosaics. 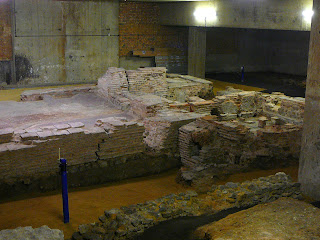 After the Roman legions withdrew in 410 AD, business declined. The buildings were eventually abandoned and gradually disappeared from view. They were rediscovered in 1848 by workmen building the new Coal Exchange, and the complex became one of the country’s first scheduled monuments. It wasn’t excavated properly until the late 1960s, when the road was widened and the current office block built on the site. This summer work has been going on to prevent further damage from water in the sub-soil and stabilize the remains. On the two days the site was open, a steady stream of visitors descended the narrow staircase to the basement, where a viewing platform provided a good view of what has been uncovered: the baths and the north and east wing sections of the house. 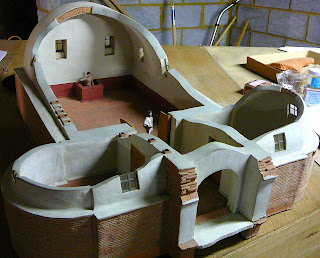 At first, under the glare of fluorescent lights, it was hard to distinguish the different features among the jumble of bricks and stones, but a model (above) showed the baths as they were. 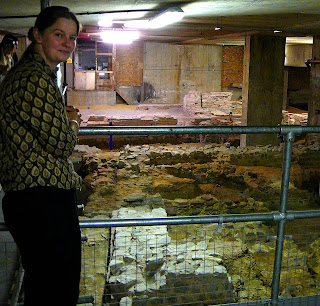 And archaeologists who’d worked on the project, such as Jane Sidell (left) were there to explain the layout and what had been achieved.  It’s hoped more people will be able to visit the site in the future - when the present building is demolished, its replacement is likely to allow better access to this fascinating glimpse of the past. In the meantime, the complex may be opening during Open House Weekend on Sept 17 and 18.

There’s a blog about the excavation: http://billingsgatebathhouse.wordpress.com/
Posted by sandra at 20:43:00 No comments: