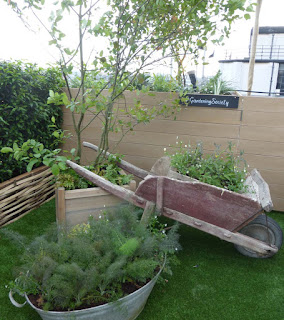 For the third year in succession, John Lewis has opened a rooftop garden, complete with pop-up restaurant, at its flagship Oxford Street store in London. It’s the work of Tony Woods, a former RHS Young Garden Designer of the year, who created the store’s first rooftop garden in 2014. 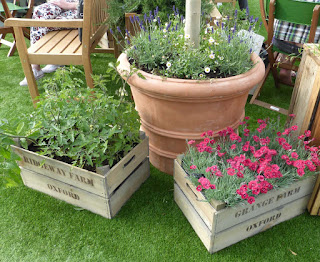 This one has a very English feel, with a palette of pinks, purple, blues and white from plants such as lavenders, hydrangeas and marguerites. 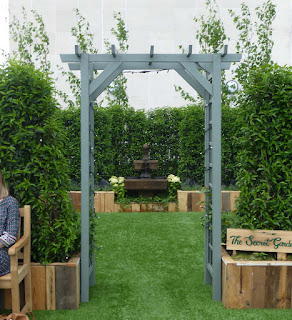 The Secret Garden (above) has a stunning display of alliums, 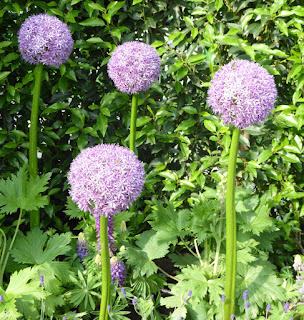 Standard olive trees in terracotta pots give height and mask the surrounding buildings and cranes. 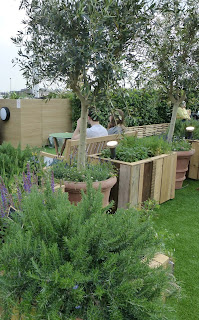 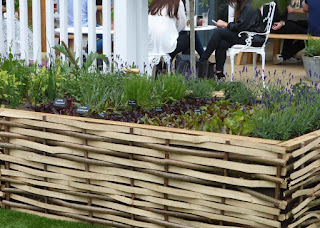 Planters are full of herbs, all clearly labelled. There are plenty of vegetables, too: the tomato plants are setting fruits, while the chillies (below) look ready to eat 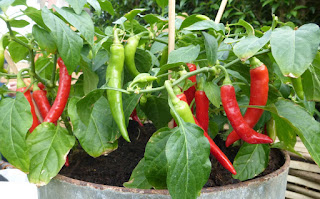 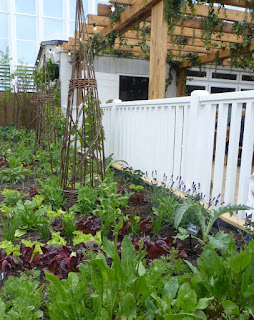 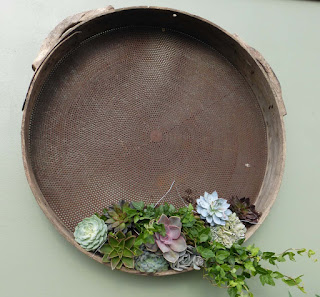 As well as brimming with planting ideas, the garden is a sanctuary away from the hustle and bustle of the busy shopping streets below. Go there for a meal or a cocktail (food is served under a large pergola with both covered and open seating), to simply to sit and relax for a while, or even try the yoga class at 7.30 on Thursday mornings. 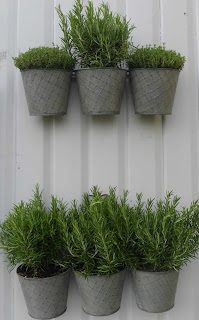 And should inspiration strike, you can take some of the ideas home with you - a tiny shop in a shed is packed with garden accessories. The garden is open Thursday to Saturday, noon - 11pm, Monday to Wednesday noon - 8pm and Sunday noon - 6pm. 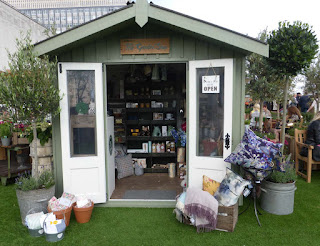 See JohnLewis.com/thegardeningsociety
Posted by sandra at 00:08:00 No comments:

In search of the perfect kitchen garden 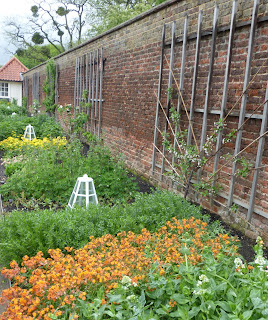 Anyone dreaming of creating their own kitchen garden will find inspiration in spadeloads at Hampton Court. Two years ago, Historic Royal Palaces reclaimed part of an area that had once provided fruit and vegetables for the kings and queens living at the palace. The original garden was divided into six square, walled areas, each about one acre in size, and had been built for William and Mary in 1689 on the site of Henry VIII’s tiltyard (jousting had gone out of fashion). With the help of contemporary paintings and engravings, it's been possible to work out the layout of the beds and discover what crops were being grown there in the 18th c. (It seems salads – or Grand Sallats – were a favourite of the royal household: lettuce, rocket, endive, cucumbers, parsley and more unusual ingredients such as costmary, hartshorn and sweet maudlin feature in recipes from that time.)
But all this changed when Queen Victoria came to the throne. She combined all the royal kitchen gardens in London into one operation at Windsor Castle. The Hampton Court one was leased out as market gardens for many years, before being converted to pleasure gardens in the 1930s 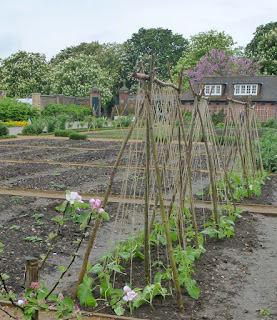 Today, the garden has returned literally to its roots, with espaliered fruit trees fanning out along the mellow brick walls and beans climbing up traditional wigwams (above). Rhubarb is forced under terracotta pots, tender shoots are sheltered by wicker plant protectors and melons ripen in hazel frames where rotting straw and fresh manure heat the soil. And of course, there are plenty of salad leaves. 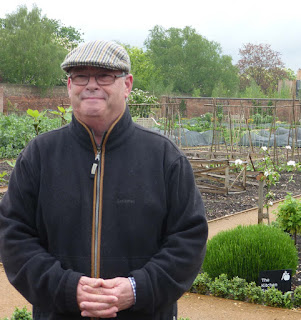 Head gardener Terry Gough (above) is the fourteenth to hold that position since Capability Brown (1764 – 1783) and is rightly proud of what has been achieved. He says they use traditional gardening skills and techniques where relevant and appropriate, but also modern time-saving machinery to guarantee sustainability. As to the neat box borders and colourful flowers that catch the eye, he points out that as well as being useful, kitchen gardens were traditionally ornamental. 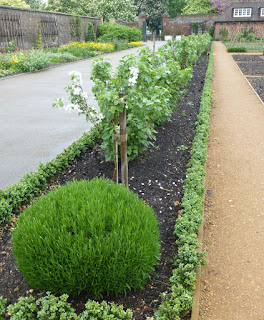 Terry Gough stresses the importance of respecting the efforts of those who preceded him, so there are unlikely to be any dramatic changes during his tenure, though one major new project has been the creation in another part of the old tiltyard of a new garden for families, designed by landscape architect Robert Myers. The Magic Garden was opened in April by the Duchess of Cambridge, and is designed to bring alive the history and legends of the Tudor court. 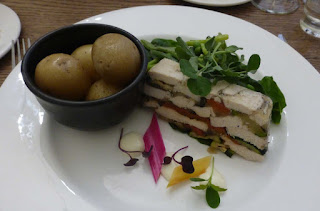 Whenever possible, produce from the kitchen garden is used in the palace restaurants - I was served a delicious chicken terrine with salad and new potatoes (above). Should you want to try some traditional gardening at home, heritage seeds of now-rare varieties are on sale in the gift shop.
The good news is that because it's an educational facility, access to the kitchen garden is free of charge, though you need a ticket to visit the formal gardens. and the palace. Until September 4 2016 there's a fascinating exhibition in the palace, The Empress and the Gardener, of drawings of the estate as it was when Capability Brown was in charge. More at http://going2see.blogspot.co.uk/2016/05/the-empress-and-gardener.html
A separate ticket for just the Maze and Magic Garden is also available.
Details at http://www.hrp.org.uk/hampton-court-palace/
Posted by sandra at 17:42:00 No comments:

A meander along the Dollis Valley 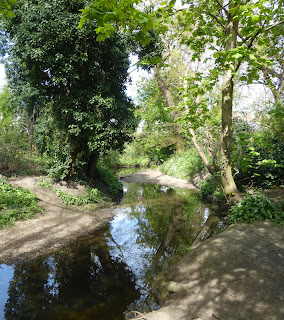 A bubbling stream, wild garlic and bluebells, an egret, a moorhen and the highest bridge in the London tube network - all discovered in the space of a couple of hours, along the Dollis Valley Greenwalk. 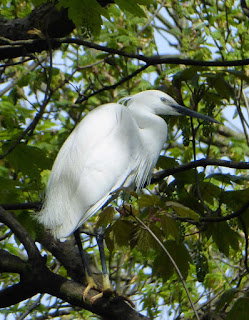 The walk is actually about 10 miles in length, following the path of the Dollis stream from source to where it joins the River Brent and makes its way south to the Thames at Brentford. This briefer excursion took us through part of the southern valley, from Hendon Lane to Sussex Ring. With the spring sun glinting on the water, a moorhen searching for a snack and the new green foliage overhead, it was a hard to believe central London was just down the road. 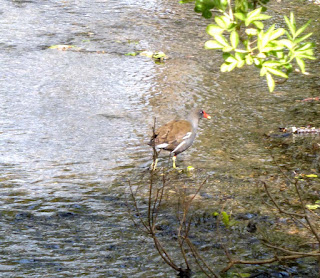 The banks of the brook were carpeted with wild garlic, with its white flowers and pungent odour. The bluebells, alas, were Spanish rather than native, but still made a beautiful contrast. 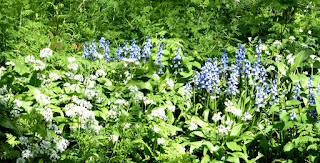 There was more colour, too, as we passed between Fursby Avenue allotments (winners of the best-kept small allotments in Barnet in 2015), where a spectacular display of tulips lit up the path. 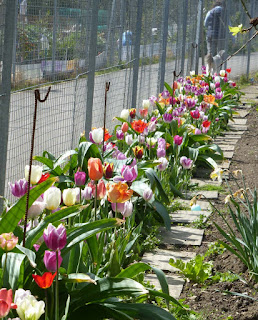 Interestingly, a little further along, we spotted a wooden structure perched right on the river bank, at the end of a garden - a good place for bird-watching, perhaps? 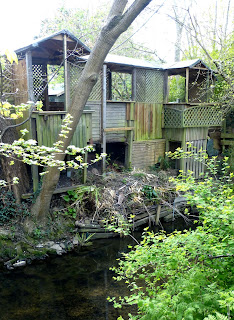 The viaduct, with its striking 13 brick arches, soars 60 feet above the Dollis Brook, and is the highest point in the London Underground. 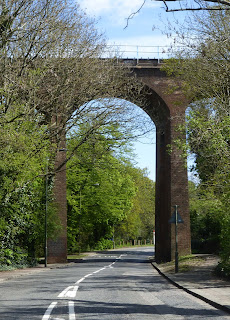 Construction started in 1863 when it was part of the Edgeware, Highgate and London Railway. Looking at it from all angles, you have to acknowledge the skill of those Victorian engineers. 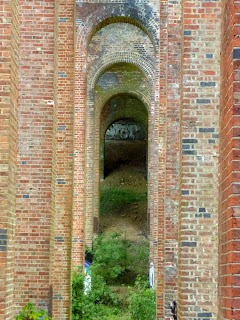 Today, the railway takes the Northern line from Finchley Central to Mill Hill East - a reminder of how accessible such a wonderful countrified space actually is. 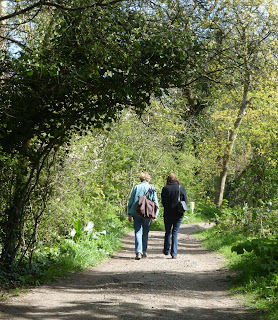