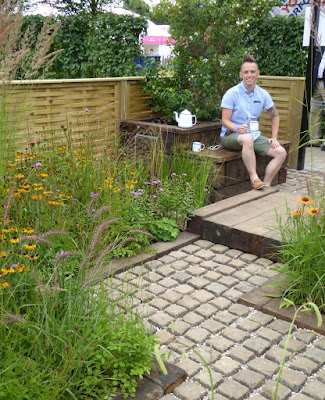 It was great to see young horticultural talent on display at this year’s RHS Hampton Court Flower Show. Step forward Lee Burkhill (above), whose ‘Fancy a brew? Take a Pew’ design for BBC Radio Manchester was among the four winners in the BBC Local Radio Front Garden Design Competition and was turned into reality for the event. A survey by the RHS last year found that three times as many of our front gardens are now paved over compared with ten years ago, while five million have no plants growing in them at all – not even a lonely geranium in a pot. Yet plants and good design can have positive effects on people's health and happiness. 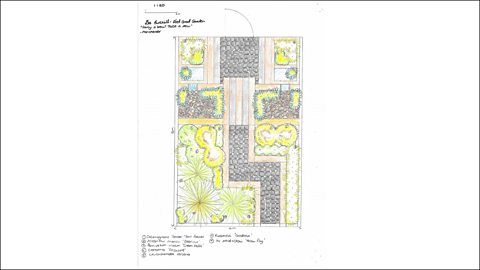 The challenge was to take a small 6m x 4m plot and show what could be achieved (above). Lee's inspiration came from Manchester’s industrial heritage and community spirit. With a cobbled garden path symbolic of the famous Coronation Street cobbles, reclaimed railway sleepers containing raised beds and water reflecting the city’s canals, he included seating and a bench to encourage neighbours to stop and share a cuppa. 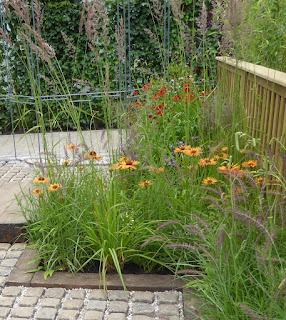 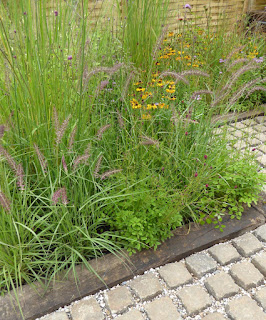 As well as running his own garden design business, Lee also has a blog which he uses to help and inspire garden newbies. I don't think this is the last we'll be hearing of him.
http://www.gardenninja.co.uk/
The three other winners were Simon Judge (BBC Radio Bristol), Jenny Booty, Lizz Dobinson, Nicky Shellis and Tim Walker from the Eden Project Learning (BBC Radio Cornwall) and Sarah H. Morgan (BBC Radio Kent). See  http://www.bbc.co.uk/programmes/articles/57Khp4Hqkldy62bfggtqRL8/bbc-local-radio-and-rhs-design-a-garden-competition
Posted by sandra at 19:13:00 No comments:

In search of the source of the Dollis 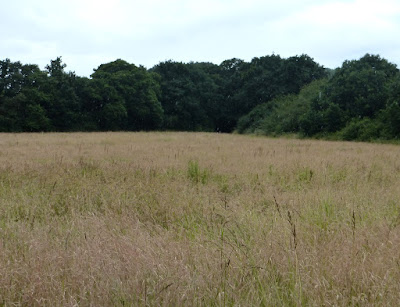 After a morning that began with brilliant sunshine and ended with thunder and rain, we were finally in sight of our goal – Moat Mount (above), the source of the Dollis stream. Our neighbourhood walking group had been following its course along the Dollis Valley Greenwalk over the summer. This was the last section, and we were keen to see where it emerged from the earth. 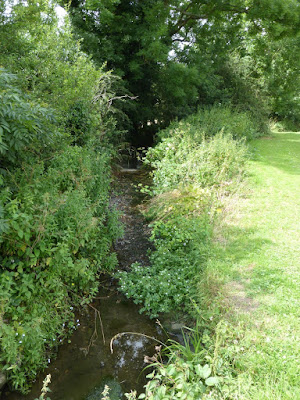 The morning’s ramble had started several miles further east, picking up the stream near Dollis Valley Way. We has been lucky spotting birds along the more southern section, but here the wildlife seemed to have gone into hiding, though someone heard a kingfisher. The stream itself at this point is not much bigger than a large ditch, and hidden by trees and undergrowth. However the views of the wide open spaces beside it more than made up for that. 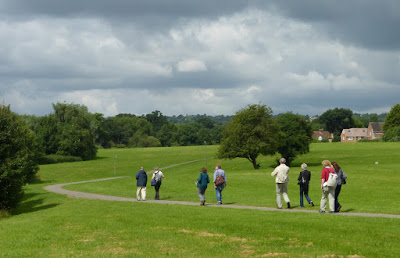 We passed playing fields, meadows and farmland, where until early last century, hay was grown for London horses (below). 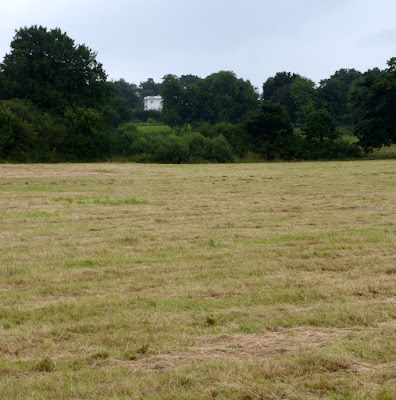 The path took us over a couple of stiles – an oddity in London - past the Old Cholmeleian sports ground, with its carefully-mown cricket pitch, and into the Totteridge Fields nature reserve. 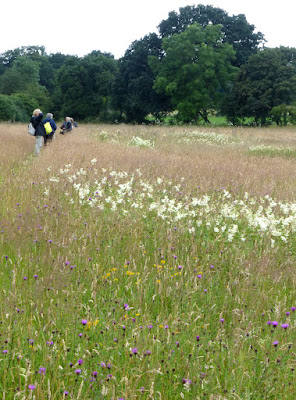 This site is managed by the London Wildlife Trust, and can apparently attract thousands of butterflies. The reserve is mostly meadow, surrounded by hedgerows the Trust says are remnants of the once extensive oak/hornbeam coppice woodland. 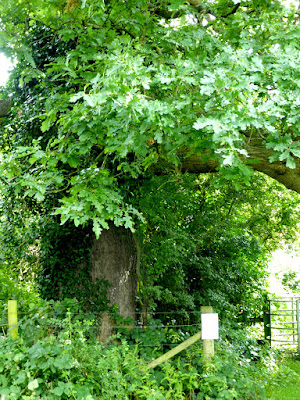 At this point the rain became really heavy, and we took shelter under a huge oak (above), its ivy-covered trunk probably about five feet across. Nearby was a bee box, placed there to house rescued, trans-located bumblebees. 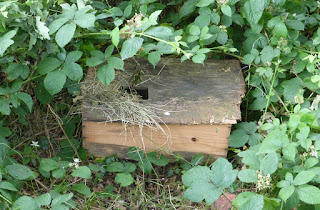 Some wild dog-roses were tangled amongst the brambles. 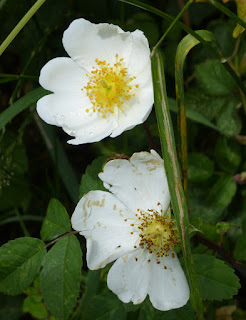 Once the rain eased, the walkway took us past farmland, along Hendon Wood Lane, once probably a minor Roman road – Roman coins were found there some years ago – and up to Barnet Gate Wood. This is a remnant of the extensive Middlesex forest, which covered most of the area after the last Ice Age. (Barnet Gate was for a long time called Grendelgate, after Grendel, the monster from the Anglo-Saxon epic poem, Beowulf, and the name suggests the place was of some importance in Saxon times.) From there we headed towards the Moat Mount Nature Reserve and suddenly before us there it was: a clump of dense trees where the springs that feed the Dollis first emerge. But then the rain really set in. 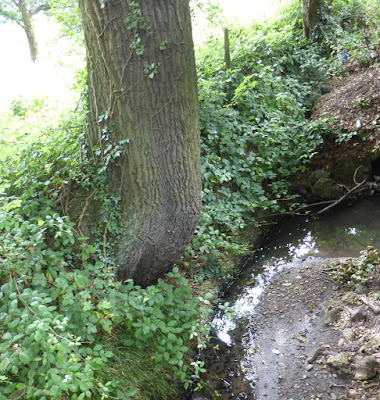 I did spot a trickle of water in some mud but it was still some way from the trees that were to have been our final destination. And as the rain got heavier, we reluctantly decided to abandon the exploration of Moat Mount – once the site of a moated house and then a grand Victorian villa – and seek shelter in a nearby restaurant. So the source of the Dollis for us remains undiscovered - until another day.


PS: Should anyone be wondering where the name Dollis originated, there seem to be several possible explanations. Dollis is thought to be derived from the British dylif (a flood) or the Anglo-Saxon dwllice (erratic) while Dollis Hill may take its name from a former inhabitant called Dolley or Dawley.

For details of a previous Dollis stream walk, see
http://greenjottings.blogspot.co.uk/2016/05/a-meander-along-dollis-valley.html