The best view of London? (And it's free!)

This is the London skyline from the roof terrace of the recently-opened shopping complex at One New Change, just east of St Paul’s cathedral. (Click to enlarge.) A glass lift whisks you to the 6th floor, and suddenly there's this amazing panorama which takes in many of the capital’s landmarks - from the Shard at London Bridge (left), to Tate Modern (centre), the London Eye and Houses of Parliament (behind the spire), the dome of St Paul’s and the back of the gold-leafed statue of Justice on the top of the Old Bailey (far right and below). 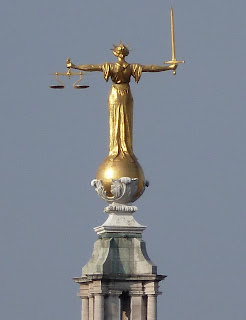 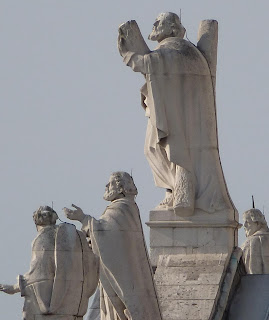 The cathedral is so close it feels almost within touching distance, and  you can glimpse many details not easily visible from the ground, such the apostles in this group on the south facade. 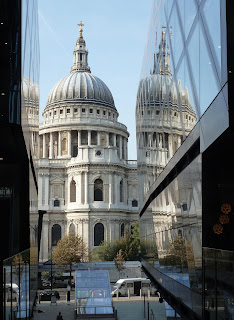 One New Change was conceived by French architect Jean Nouvel, and has walkways that follow the medieval street pattern while at the same time framing the cathedral. It replaces a 1950s building that housed the Bank of England’s accounts department. A circular mosaic and a row of sculptures by Charles Wheeler were saved during demolition, and are at the far end of the terrace.
If you have time to linger and perhaps catch a sunset, there are places to sit, as well as a restaurant and a café.
The roof terrace is still largely unpublicised, so shouldn't be crowded. And even better, admission is free. So next time you’re in London, put One New Change on your must-see list.