Exploring the many uses of herbs

As someone whose potted herbs have until now come from a supermarket's limited stock, a visit to Manor Farm Herbs in Oxfordshire was a revelation. The nursery grows an amazing range of around 200 different varieties, some familiar, others that I’d never heard of, such as this white Lavender, Meeilo. 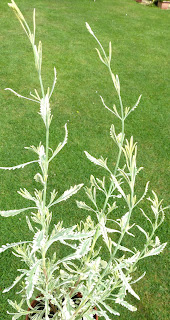 Their plant list includes herbs with culinary, medicinal and cosmetic uses, and runs from Achillea Desert Eve Red to Wormwood prostrate. Among them are no fewer than 22 different Thymes, 8 different Houseleeks, and 19 varieties of Mint! 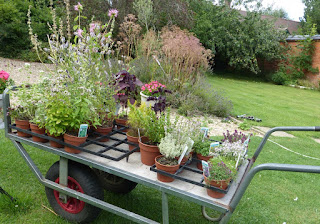 I came away with a basket full of plants, and buzzing with ideas of what to do with them. Jane, who runs the nursery, gave our group a very interesting talk, pointing out that many of the herbs are highly decorative with a wealth of colours and can live happily anywhere from a rockery to a herbaceous border or hanging basket. They're also useful to cover bare ground around the stems of perennials - for example, Jane suggested putting this Purple Sage below a rose bush. 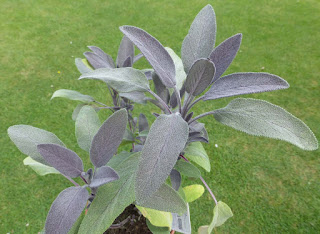 For a splash of more intense colour, there's a striking Purple Basil, while a touch of pink or mauve could be added by the flowers of Heartsease or Chive or this Creeping Pink Thyme (below). 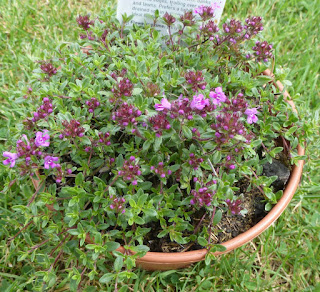 Yellows and oranges come from Golden Purslane, Pot Marigold, and Nasturtiums. For white accents there are Basil and Salad Rocket flowers as well as Nasturtium ‘Alaska’ leaves. Jane also recommended adding herb leaves and flowers to salads for extra aroma, flavour and texture. One tip was to finely chop a fresh herb and add to a French salad dressing mix, leaving it to marinate in a fridge for up to 24 hours before using. 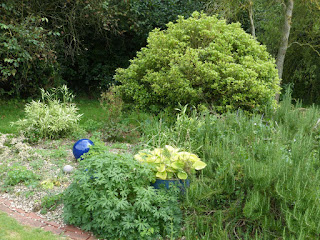 A highlight of the visit was afternoon tea in the garden, surrounded by herb-packed borders. Not surprisingly, the home-baked cakes all featured herbs from the nursery and Manor Farm Herbs' detailed website has a wide range of recipes to encourage experimentation. Ideas include Lavender cookies, Rosemary and Orange drizzle cake, Sage bread, Beetroot and Apple soup and even a Cucumber and Lemon Variegated Thyme Martini. There's also a plant list for mail orders, growing ideas, and care instructions. 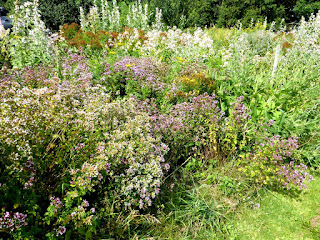 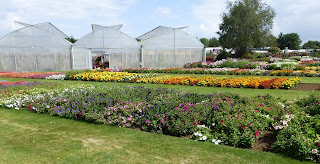 Every summer, one of the country’s biggest suppliers of bedding plants, Ball Colegrave, opens its trial grounds at West Adderbury in Oxfordshire to horticultural specialists, retailers, landscapers and home gardeners. This year, more than 3,500 visitors came along to enjoy the amazing Summer Showcase displays, which included 200 new varieties and 700 experimental products. They were invited to vote for their favourites, and the results give a good indication as to what is likely to be popular in garden centres and nurseries across the country next year. So what received the most votes? 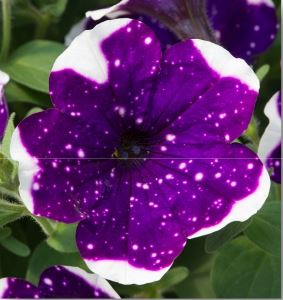 It was a petunia, but no ordinary one. This eyecatching Glacier Sky has large violet flowers speckled with a constellation of white stars edged with an ‘ice’ effect margin. Bred to achieve high weather resistance and with a strong branching habit, it would add that something special to baskets and containers. 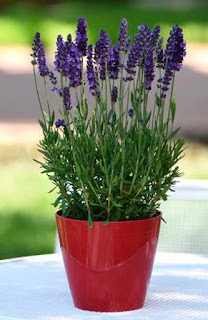 The second overall favourite was a spectacular new lavender, Blue Spear, with tall spikes of an intense bluish-purple.  It does best in full sun, while being a magnet for pollinating insects, and is ideal for containers, garden beds and rock gardens. 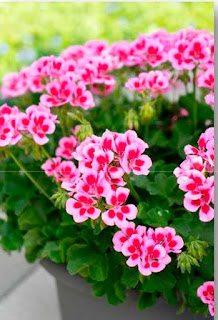 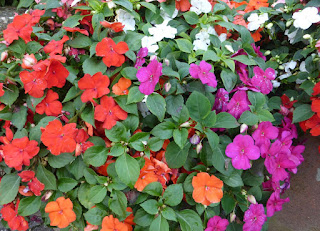 Outstanding among the many current varieties on display was Ball Colegrave's new downy mildew-resistant Busy Lizzie, Beacon Impatiens (above), which comes in a wide selection of colours. The flowers seem to be happy with whatever the summer weather can throw at them and were making wonderful displays, despite the blazing heat of the previous week. 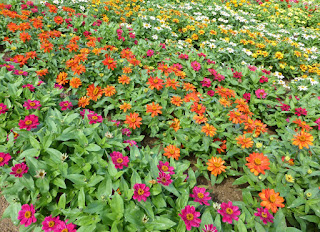 I was also taken with the beautiful range of zinnias. This is a plant that’s fluctuated in popularity over the years – my grandmother loved them, but my mother wasn’t a fan.  Now new easy-care varieties like Zinnia Zesty (above) have been developed that will perform whatever the weather, ready to delight a new generation of gardeners. 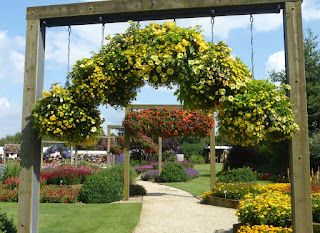 The displays around the grounds (above) were amazing, full of ideas and inspiration. 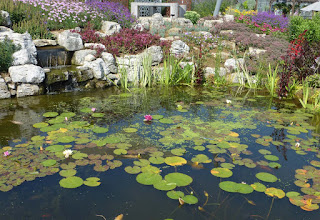 The painter Monet would have loved the planting in and around the water feature, while two living walls, ablaze with colour, showed what could be achieved with the right framework. 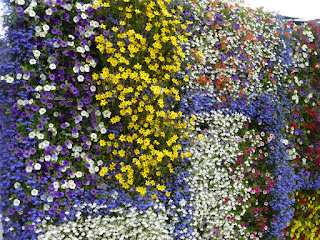 And it wasn’t just the visitors who were enjoying the displays – they had attracted the attention of flocks of colourful butterflies  – including this Peacock on a Dianthus Dash Magician. 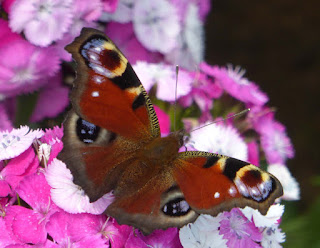