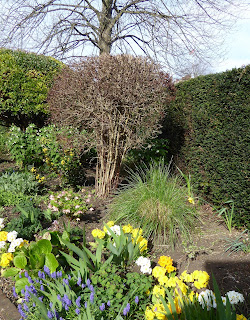 A dockyard is not a place where you expect to find a garden that spans three centuries of horticultural history. But slip through the side entrance behind the Resident Commissioner’s House in Chatham Historic Dockyard in Kent, and that’s exactly what you’ll find. Originally created for the private enjoyment of Peter Pett, one of Britain’s leading shipwrights and Chatham’s second Resident Commissioner in 1698, it initially took the form of a romantic Italian-style garden with three terraces cut into the hillside, with the lower one featuring a water garden and banqueting house. The diarist John Evelyn described it as ‘resembling some fine villa about Rome’. But fashions changed, and the old house was demolished and rebuilt in a grander style. The lower terrace lost its fountains and canals, the middle terrace became a parterre, and the upper one an orchard. 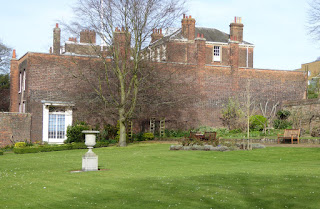 In Victorian times, the garden was a family one, with a lawn and fountain in the centre. (A facing brick wall without any windows, above, provided privacy from clerks working in the neighbouring Navy Pay Office, among them the father of author Charles Dickens.) The 20th c, with two World Wars, brought a period of decline. When the Naval Dockyard closed in 1984 the garden passed into the care of the Chatham Historic Dockyard Trust and Kent Gardens Trust, who have been restoring original features. 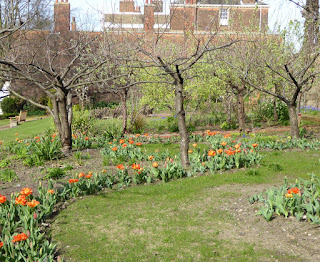 The orchard has been replanted with 18th c species and a formal garden commemorating the 1989 bombing of the Royal Marines School of Music at Deal, which killed 11 musicians, has been extended. 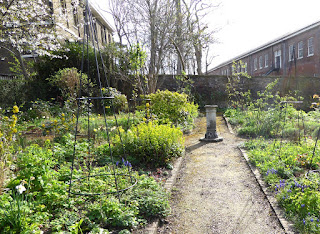 Note: The area is expecting a major influx of visitors in 2017 for events marking the 350th anniversary of the Battle of the Medway (below), when much of the British Navy was destroyed by a daring Dutch naval raid. There will be re-enactments, sporting events and a spectacular finale on the water, Medway in Flames, from June 8 - 17, while the Dockyard is staging a special exhibition with a range of artefacts on loan from national and international institutions (June 8 – September 3).
http://new.medway.gov.uk/news-and-events/battle-of-medway 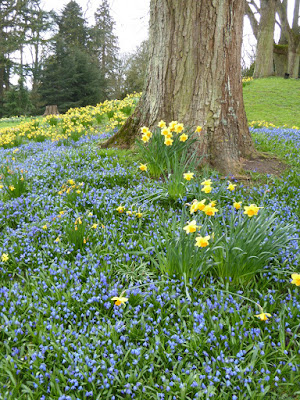 Yesterday, two days after the equinox, the gardens of Waddesdon Manor in Buckinghamshire were glowing with spring flowers – daffodils and bluebell-like scilla dancing under the trees. 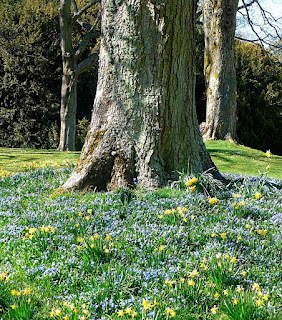 But looking through photos taken on a previous visit, I found a similar scene taken on April 20 2013. Slightly different angle, same tree, same flowers - much later. A sign of climate change? 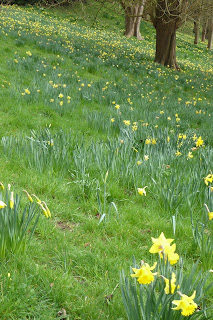 In any case, it means there’s a lot to see and enjoy in the grounds right now. The Daffodil Valley (above) is clothed in yellow, while the formal bedding is looking spectacular. 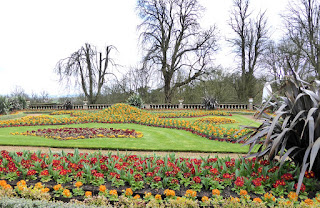 And if you walk down to the Stables, you’ll find a new attraction, the Treaterie. Here are homemade crepes and waffles, cakes, pastries, macarons and fudge, and artisan ice cream made by Elizabeth Prior of Oliphant and Pomeroy (who, on its opening day, confessed to having been up at dawn, preparing the mix for the salted caramel ice cream). 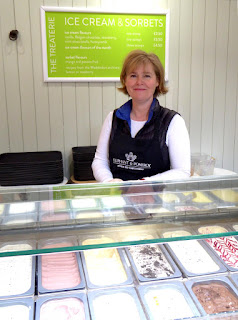 Other flavours include some from the Waddesdon archives, which may well have been enjoyed by Queen Victoria and the future Edward VII when they were entertained by the manor’s original owner, Baron Ferdinand de Rothschild. 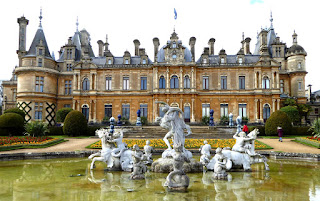 Waddesdon Manor is a National Trust property some 6 miles from Aylesbury. There is now a free shuttle bus that picks visitors up once a day from Aylesbury Vale Parkway station. It links with the 9.57am train from London Marylebone and returns at 4.15 for the 4.43 train Wed – Fri. Saturdays, Sundays and Bank Holidays it leaves at 4.45pm for the 5.13pm train. 2017 exhibitions include Glorious Years (highly decorated 17th c French calendars and almanacs), now on; Power and Portraiture (featuring Elizabeth 1) and Creatures and Creations are both open from June 7.
https://waddesdon.org.uk/ 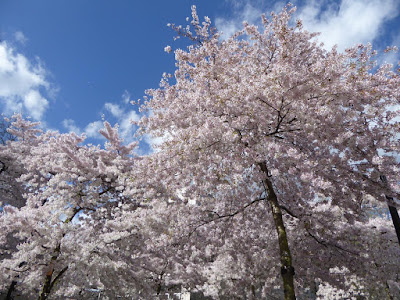 The park at Swiss Cottage has been transformed into a dancing sea of blossom. 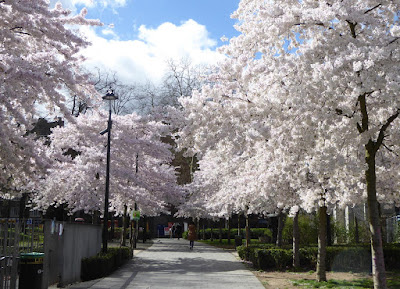 So beautiful, yet transient - an icy wind is already turning the petals into confetti. 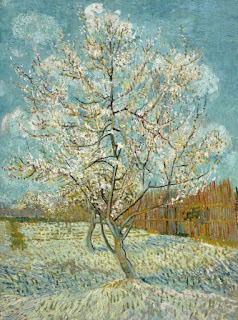 Although the park is in the middle of a city, it reminded me of this Van Gogh painting, done in Arles more than 120 years ago. But I suspect the weather there might have been warmer.
Posted by sandra at 16:56:00 No comments: 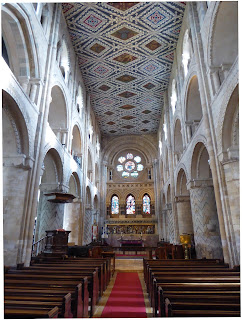 It’s not often that the remains of a ruined building are given a 4-star rating in a guidebook, but in the case of Waltham Abbey – all that's left of a once-great Augustinian monastery – it's more than justified. As our walking group passed through the heavy west doors, what we saw (above) prompted a collective gasp of wonder. 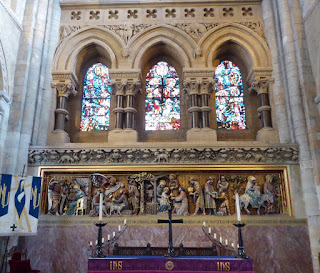 We gazed in awe at the huge Norman columns, the magnificent stained glass windows by pre-Raphaelite artist Edward Burne-Jones, the intricately carved reredos and the elaborate painted ceiling covered with signs of the zodiac – a recreation of Peterborough cathedral's medieval roof. 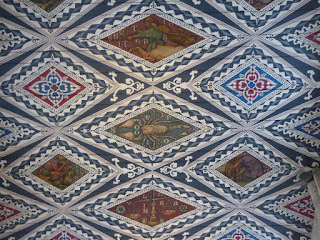 It was all the more stunning for being so unexpected. 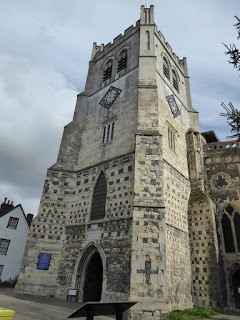 The tower at the entrance (Tudor) is undistinguished, patched and restored, and giving no hint of the treasures within. 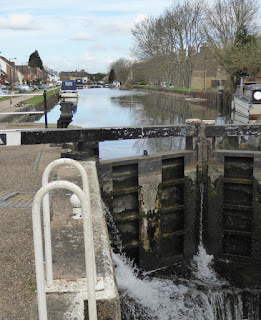 Our walk had started at Enfield Lock station, crossing the Turkey Brook, and heading north along the Lea Navigation, where we saw this egret. 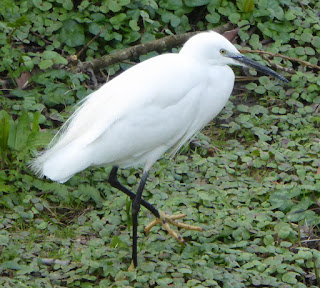 Quite a few boats have gathered under the M25 - not the most peaceful of moorings. 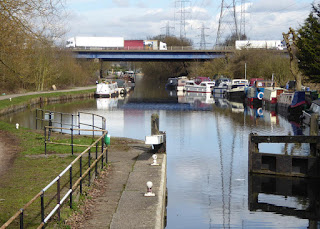 From there it was only a few minutes heading east along a busy high street till we reached the Abbey, which still dominates the town centre. 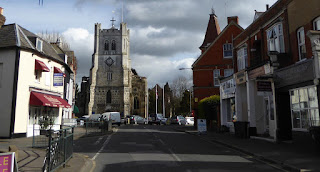 Waltham’s first church was built in the 6th c and became a place of pilgrimage when a stone crucifix was brought there from Somerset. Several centuries later, King Harold went to pray at the shrine and was cured of a serious illness. In gratitude he built a new church and after his defeat at the Battle of Hastings in 1066 was brought back for burial. What stands today dates from the Norman conquest. Henry II founded the abbey as a penance for the murder of Thomas Becket and trebled the establishment's size, but with the dissolution of the monasteries under Henry VIII it was reduced again to just the Norman nave, which serves as the parish church. 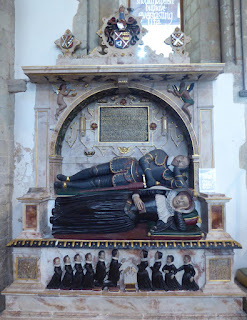 A useful leaflet guided us round some of the building’s highlights, including the elaborate Denny tomb (above)  and a graphic 15th c Doom mural of the Day of Judgement,  rediscovered during restoration work in the 19th c.

Harold’s burial-place is unclear, but there’s a memorial stone outside the east end of the church. Lunch was calling, so there was a change of scene as we headed for the White Water Centre in the Lee Valley Country Park (that's their spelling).

This was built to host the canoe slalom events of the 2012 Olympics, and opened by Princess Anne in 2010. Today you can visit it and go white-water rafting, canoeing and paddle-boarding – or just take in the action. We watched while members of a group, clad in wet suits, jumped into the water and were ‘rescued’ – presumably part of a training course. 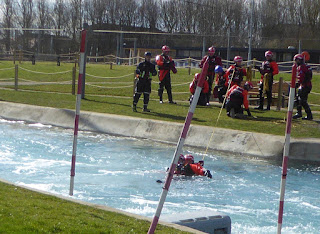 The food at the centre’s cafe was plentiful and quickly served, but sadly the terrace, which has a view over the park, was closed. Then we started along a path across the southern-most section of the 1000-acre park, which would eventually take us to Cheshunt and a train home. 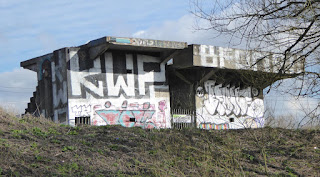 We passed a strange concrete structure, covered with graffiti, that turned out to be one of the few remaining WWII Bofors anti-aircraft gun platforms and is now a scheduled monument. It was hard to imagine that this area, now so peaceful, was once part of the Outer London Anti-Tank Line, built to protect London from invasion. Today, the revitalisation of the valley - part of the Olympic legacy -has created a wildlife haven and the Regional Park Authority has produced several very informative booklets which detail what can be seen and where. 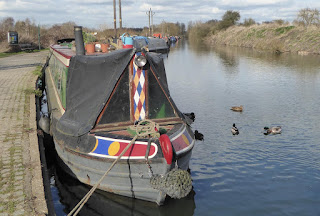 Walking along the towpath, we passed dozens of  inquisitive swans and geese, while coots were noisily making themselves heard out on the water. 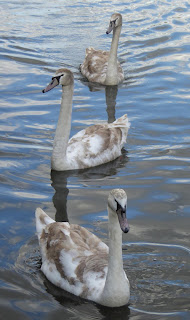 It would be worth coming back in the summer when there are many more birds and we could follow the 2-mile orchid discovery trail. A park map even shows a dragonfly sanctuary – half the UK species are found there. But for now, we'll be continuing our exploration of the Lea Valley. 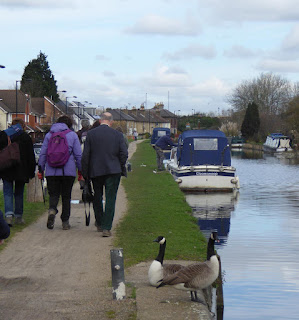