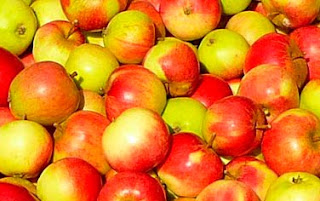 On Friday, people across the country will be celebrating the apple – recognising the wealth and variety available in the UK. National Apple Day was started in 1990 by Common Ground in Covent Garden, and has since spread, with hundreds of events taking place. In NW London we have been playing our small part. Over the past few weeks the local fruit-harvesting group (part of the Abundance scheme) has picked more than 400 kg of fruit that neighbours couldn’t reach or didn’t want, and given the excess to charities. A couple of weekends ago we joined members of some other Brent picking groups at nearby Fryent Country Park and together gathered  a further 418kg, much of which went to the Sufra foodbank. 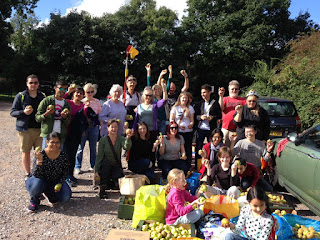 Hundreds of different varieties of apples are cultivated in the UK – Fryent’s 1000 fruit trees include 28 varieties of heritage apples, all grown organically and maintained by the Barn Hill Conservation Group. They include the Pinner Seedling, discovered in Harrow in 1834 and grafted on to root stock by the National Fruit Collection at Brogdale. 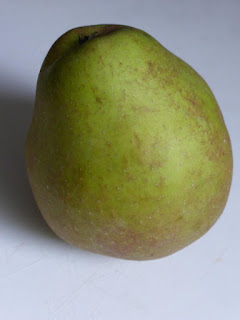 Some apples I found there have me puzzled – they look almost like a pear. No-one in our group was sure about the variety. Any suggestions?
http://www.abundancenetwork.org.uk/
https://www.commonground.org.uk/apple-day/
https://www.brent.gov.uk/services-for-residents/sport-leisure-and-parks/parks/park-finder/fryent-country-park/
Posted by sandra at 12:59:00 No comments: 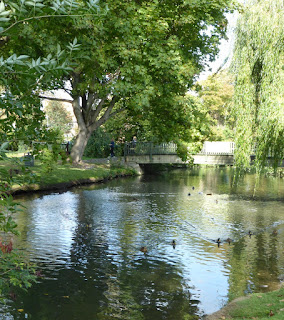 The latest leg of our walking group’s ramble along the Lea Valley saw us in Hertford, not far from the Lea’s source. Here it is joined by three other rivers – the Rib, the Beane and the Mimram, which have all contributed to the town’s prosperity. Hertford has a long history, so there was a lot to see. 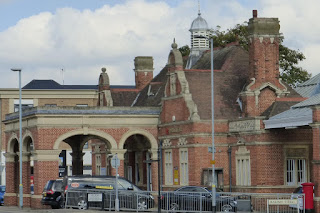 We had arrived at Hertford East station, a Victorian gem dating back to 1888 and now a Grade II listed building. The ceiling of the ticket hall is embellished with plasterwork and the elegant front has arches that provided shelter for horse-drawn vehicles. 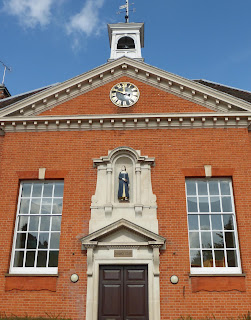 Across from the station is a branch of what was Christ's Hospital School, founded in London by Edward VI in 1552 for the education of poor children. The Hertford premises were established as an overspill in 1682 and remained as a Bluecoat school until 1985, when pupils were moved to Horsham and the buildings sold. 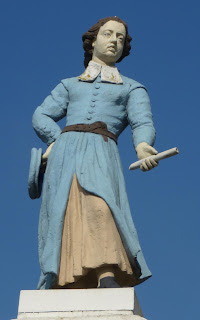 Today, they contain offices and sheltered housing, but two painted statues of boys in traditional uniform still decorate the gates. 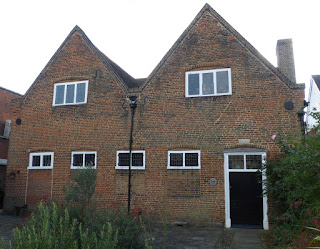 Next stop was outside a very plain brick building that is the Friends' Meeting House. Built in 1670, it’s the oldest of its kind in the world still used as a place of worship. Quaker leaders George Fox and William Penn are known to have worshipped there. The gate was locked, but we could peer through at the carefully-tended front garden. 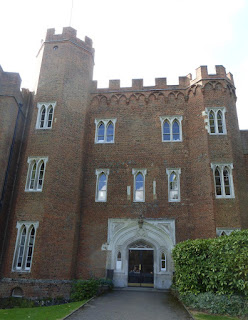 A short walk took us to the park that surrounds the restored Gatehouse, all that remains of Hertford Castle, and now used as municipal offices. Built on the site of a Norman castle, it was much visited by royalty, including Elizabeth I. 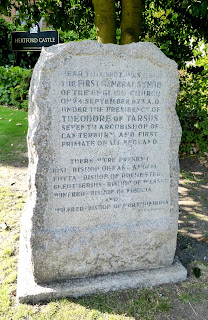 A stone commemorates the first general synod of the English church, held nearby on Sept 24 673 AD. 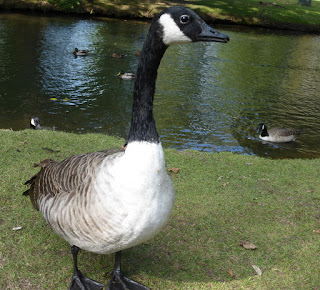 Today, the park is a green and peaceful oasis.  The Lea flows through it, while geese and ducks waddle along its banks in hope of scraps from picnickers. 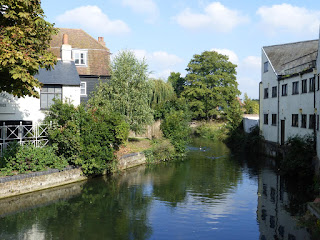 Much of the town’s prosperity came from the river. Hertfordshire was a major corn-producing area, and a mill beside the Lea was recorded in the Domesday book. The brewery industry still flourishes there: we could smell the yeast well before we crossed the Mill Bridge and reached McMullen’s brewery, a family business founded there in 1827. 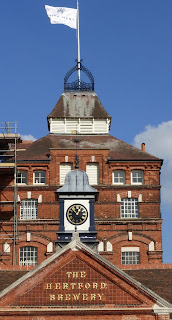 We admired it from the outside, then decamped to another part of the McMullen empire, the Salisbury Arms Hotel, to try their ale while tucking into a pub lunch of very generous proportions. 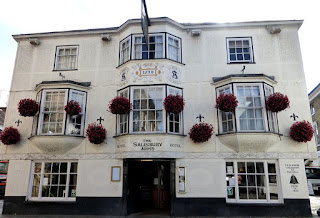 With low ceilings, blackened beams and a Jacobean staircase, the inn is where Oliver Cromwell stayed in 1647 before reviewing his troops. Some have reported seeing his ghost there. Reinvigorated, we made our way back into the High Street, where once lived Samuel Stone, who went on to found Hartford, Connecticut. There is some fine pargetting on buildings there, and I was impressed with the number of independent local shops that seemed to greatly outnumber the usual chains. 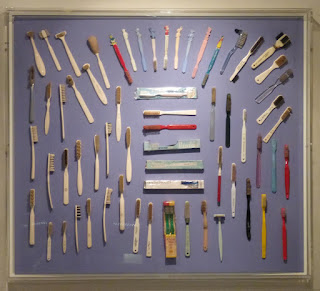 On Bull Plain we paused for a brief visit to the museum. One of its highlights is a collection of toothbrushes, donated when the local Addis factory closed. Just a fraction are on show – there are 6000 in total, conserved and labelled by volunteers. Other items include an 1830s shepherd’s smock, archaeological and natural history findings, household utensils and children’s toys. 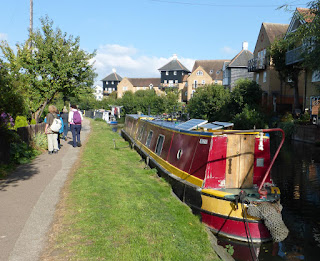 Then it was back to the river, this time the Lea Navigation. Passing a row of picturesque cottages, we came across several brightly-coloured barges tied up at the visitor moorings. One even had a rotary clothes line on its deck. The Lea Navigation then meets and runs alongside the River Lea, the two separated by a walkway. 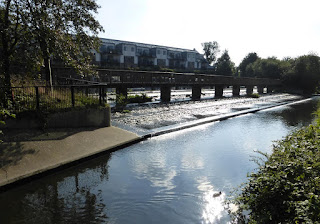 The trees were starting to gain their autumn colours and the low autumn sun glinted on the water. We stopped to watch the swans sailing gracefully past the boats moored in the basin. 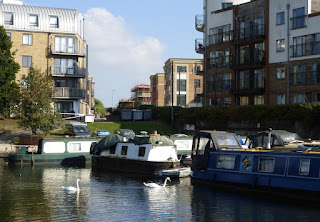 Then it was time to return to the station, happily just around the corner. We didn’t quite make it to the Mimram, the Beane, or the Rib, but perhaps that’s for another day.


An interesting historic fact that I didn't discover until later:
This peaceful little town saw the trial of the last person to be condemned to death for witchcraft in England. In 1712 Jane Wenham, who had a reputation of being a 'wise woman', complained to a local magistrate that a farmer had called her a witch. She was offered a shilling as compensation, but wasn’t content with this, and when a servant of a local clergyman who had acted as mediator fell ill, the servant blamed her and said she’d seen cats with Jane’s face – a claim supported by other villagers. Eventually Jane was brought to trial, and although the judge ridiculed the idea of witchcraft, the jury found her guilty. The judge had by law to pronounce a death sentence, but later was able to use his influence to get her a royal pardon. It wasn't until 1736 that the laws against witchcraft were repealed.

From garden to table – an Egg and Chips update 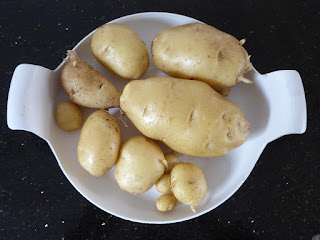 I have finally dug up my Egg and Chips – a grafted aubergine and potato novelty plant from Thompson and Morgan. Nestled among the roots were around 750g of potatoes (above) - not quite as many as I’d hoped for, but still, for a newbie potato grower, a good crop - while the stem produced a lot of flowers, and four large aubergines. These were not at all bitter, and didn’t need salting. Three disappeared into moussaka, while the largest had pride of place on the table this evening, stuffed and baked according to this BBC recipe. http://www.bbc.co.uk/food/recipes/lamb-stuffed_aubergines_99219 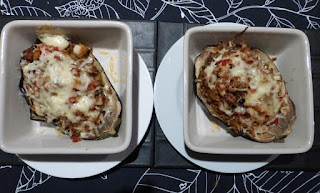