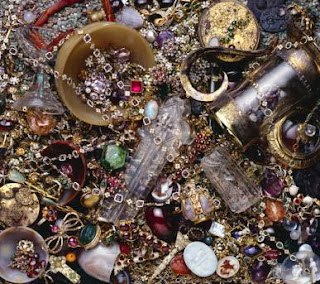 In June 1912, some labourers excavating the cellar of an old building in Cheapside in the City of London, struck gold – literally. Under the floor they discovered a tangle of 16th and 17th century jewels and gemstones including delicate finger rings, cascading necklaces, Byzantine cameos, jewelled scent bottles, and a watch set in an enormous Colombian emerald (below). 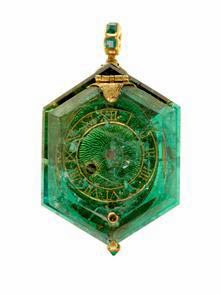 They’d been there for some 300 years, probably the stock-in-trade of one of the jewellers who had premises on Cheapside.. Who was he and why were they hidden? It's still a mystery. But conservationists preparing them for exhibition at the Museum of London have found a clue as to when they were buried. One of the gemstones (left) is engraved with the heraldic badge of the first and only Viscount Stafford. He received his coat of arms in 1640, while the blackened layer above the hoard dates from the Great Fire of London in 1666. Those 26 years were a time of great upheaval, with civil war and plague taking the lives of many and forcing others to flee their homes. Perhaps the jewels were hidden for safekeeping and the owner never returned. The museum is hoping someone may know more – perhaps a descendant of one of the labourers, or even a person with a family story of lost jewels – and they’ll come forward to shed more light on the discovery. 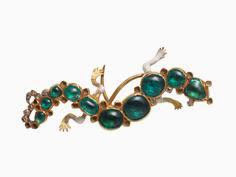 There are almost 500 jewels in the hoard and this exhibition is the first time they've been displayed together since they were found  - some have been housed at the British Museum. The display is dramatic, with dark walls and spotlights making the pieces gleam and sparkle. Magnifying glasses are provided for a closer look at the delicate workmanship such as that in this emerald, diamond and enamel salamander (left) and gold enamelled chain (below).

Portraits showing how such jewels would have been worn, such as a ring pinned to a ruff, explanations of the supposed powers of some of the stones and a replica of a jeweller’s workshop of that era add to the vistor's appreciation.


All photos © Museum of London
The Cheapside Hoard – London’s Lost Jewels is at the Museum of London until 27 April 2014.
http://www.museumoflondon.org.uk/london-wall/whats-on/exhibitions-displays/cheapside-hoard-londons-lost-jewels/