A 'Garden to Table' lesson for Camilla 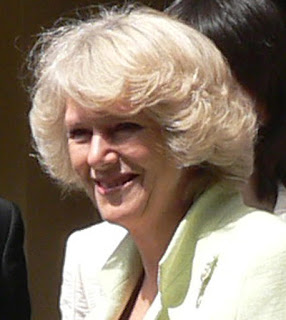 An unusual engagement for Camilla, Duchess of Cornwall, during her current visit to New Zealand with Prince Charles - she ended up donning an apron in the kitchen of East Tamaki primary school in south Auckland.  It was part of her introduction to the school’s 'Garden to Table' project, where pupils have a hands-on opportunity to learn about food. They grow fruit and vegetables in the school grounds, devise menus, then cook and serve what they’ve harvested.
Camilla watched the youngsters at work and was invited to try the feast of beetroot and fennel salad, vegetable bread cases and carrot cake laid out for her. She homed in on the carrot cake, which she said she loves, slicing it up and offering it round before trying some herself.  The school's principal said the pupils had been very excited about the duchess's visit.

The royal visit - and the carrot cake - featured on local TV news :http://www.3news.co.nz/Recipe-Carrot-cake-for-a-Duchess/tabid/367/articleID/276552/Default.aspx

In an amazing coincidence, last year I was actually at East Tamaki school myself, seeing what the project involved. I found part of the school grounds transformed into a highly productive organic garden, along with a specially-adapted kitchen for the pupils to use. ‘Garden to Table’ is run by volunteers, working alongside one kitchen and one garden specialist. Students are split into two groups, taking turns to garden and cook, but all coming together to savour the fruits of their labours. 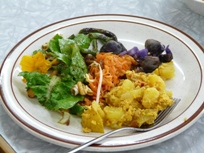 When I arrived, the morning session was just ending. The kitchen was bustling, as youngsters and volunteers cleaned and tidied after a delicious meal of potatoes mamoosa, with three different salads (above). 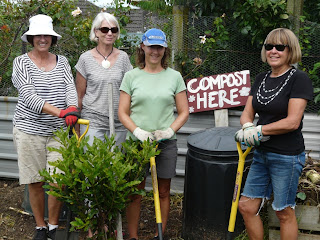 Outside, Jenny Villiger, Judy Newhook, garden specialist Karolyn Cooper and Robin Barclay (above, from left) were working on the compost heap. Nearby were beds of tomatoes, sweetcorn, spinach, courgettes, aubergines, peas, potatoes and pumpkins while just around the corner were strawberries, citrus fruit, a herb garden (below) and an orchard. 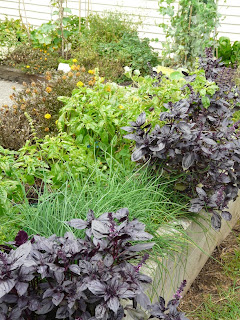 The emphasis is on growing from seed, often saved from the previous year. Seedlings are nurtured in a small greenhouse, and pupils encouraged to take surplus seeds to grow at home, thus involving the whole family. It certainly seemed to be working - surrounding gardens were overflowing with produce.


The initiative is based on the Stephanie Alexander Kitchen Garden Programme founded in Melbourne, Australia, in 2001. When I was there it was being trialled in three Auckland schools, funded by donations and the Garden to Table Trust. The maths, science, reading and writing students were learning are all part of the compulsory curriculum, but a useful bonus comes from the social skills being developed, from how to lay a table to working as a team, alongside a knowledge of nutrition and appreciation of good food. The hope is that all this will stay with the youngsters for the rest of their lives, and be passed on to future generations.
www.gardentotable.org.nz/

The View from the Shard 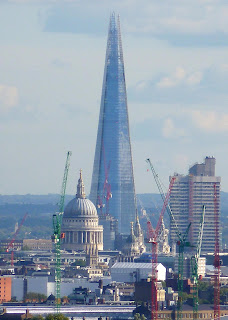 I’ve had a sneak preview of what's set to become London’s “top” tourist attraction – the viewing gallery of the Shard, at just over 310 m the tallest building in western Europe. (Looking at this photo taken last month from Parliament Hill in north London I can hardly believe I have now been right up to the pinnacle.)

Although still a construction site, as you can see, the Shard dominates the capital's skyline, towering over London Bridge station on the south bank of the Thames, its 11,000 glass panels soaring up to reflect sky, clouds and sometimes sun.

When we arrived, workmen were fitting the flooring in the huge entrance hall, but round the corner, lifts were waiting to whisk us up to the 68th floor in a little over a minute. My ears had barely popped before we were in the gallery, looking out over the capital. 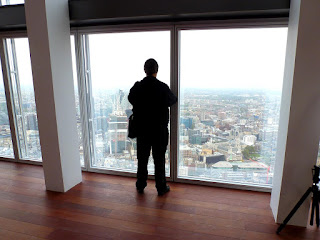 That's the moment it hits you:  the only other way to get such a view would be from the air. 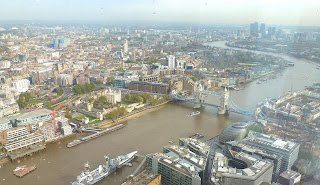 The gallery itself is the height of three storeys, the floor to ceiling windows giving a stunning 360’ view. On a clear day you could see up to 40 miles across London. On a November afternoon the view was slightly more limited, but familiar landmarks were clearly visible – the Tower of London, Tower Bridge, and Canary Wharf to the east (above), St Paul’s, Big Ben, Buckingham Palace, the Houses of Parliament and the Wembley arch to the west, while snaking through the panorama like a ribbon, the Thames, its barges and river boats like miniature toys (below). 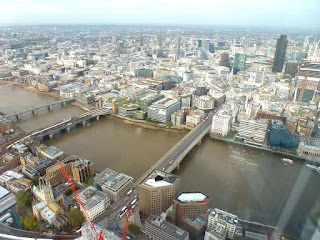 A few decades back the BT Tower (189m) and Canary Wharf (235m) briefly provided high-level views of the capital before being closed to the public. Now you look down on them, and on the many cranes and construction projects dotting the city. Between them, the spires of Wren and Hawksmoor churches are still just visible. The Shard itself casts a long shadow over the City (below). 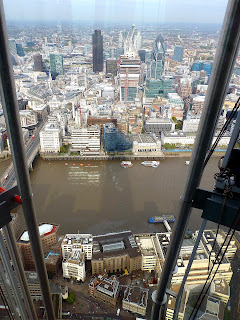 Digital telescopes provide closer views and have touch screens with multi-language information about landmarks. Visitors will also be able to climb stairs to level 72, the highest public point, open to the elements (not accessible during the preview.) 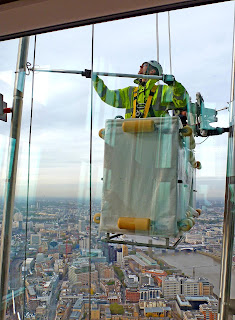 The Shard, designed by Renzo Piano and owned jointly by the State of Qatar and the Sellar Property Group. is described as the UK’s first vertical city. It will have shops, offices, restaurants, a 200-room hotel and on floors 53 – 65, ten multi-million pound residences. Cleaning the exterior is a full-time job, and not for the faint-hearted (left).

The viewing gallery opens to the public on Feb 1, 2013. A visit won’t be cheap – just under £25 if you book in advance, or almost £30 if you turn up on the day. Being so high up means it may occasionally be wreathed in clouds, but then visitors will be offered a return visit. Admission will also include a multi-media display about the history of London and the Shard itself. Booking has already opened, and it looks as if it will be THE place to be next Valentine’s Day.
www.the-shard.com

Where did all the apples go?

﻿
In north London, we've finished our community fruit-picking for this year - harvesting neighbours' apples, pears and plums that would otherwise have been left to rot, and taking them to local charities. Our total was well down - less than half the 1000 kg we collected last year. It's been a similar story across the UK. The late frosts and wet summer played havoc with the crops, and much of the fruit that did ripen was devoured by hungry squirrels and birds. But it's a great scheme and the idea seems to be spreading. I've been following the progress of a network of pickers in NZ, who are doing exceptionally well. (Read about them at http://www.garden-nz.co.nz/latest-news/news/charities-enjoy-the-fruits-of-community-s-labour.html and on Facebook at http://www.facebook.com/home.php#!/pickfruit )
We'll be out again in 2013 -  fingers crossed for better weather!
Posted by sandra at 22:30:00 No comments: