In England, the crocus is one of the signs of spring. In Germany, it's white asparagus. 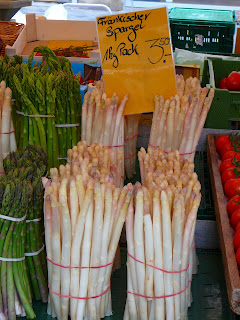 Once grown exclusively for the royal court, from April to June it's now one of the country's most popular vegetables  - about 70,000 tons are consumed every year.  Last June on the way from Nuremburg airport, we saw fields of green shoots stretching as far as the eye could see.
Germans buy it fresh from farmers at their market stalls or by the roadside, and visit the festivals along the "asparagus routes" in Baden-Württemberg and Lower Saxony. (The town of Nienburg elects its own Asparagus Queen.) 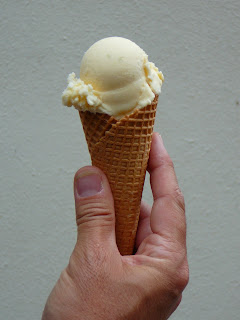 In Bamberg one enterprising gelateria was even offering asparagus ice cream.  Verdict? A refreshing change from strawberry or chocolate, but not perhaps one I'd want every day.
The asparagus season is also the maypole season, so there's lots going on at this time of year. For more, see http://germanyiswunderbar.com/southern-germany/germany-holidays-the-village-maypole/
Posted by sandra at 23:53:00 No comments:

Paris is still one of the world's most romantic cities, but did you know it has a Garden of Love? 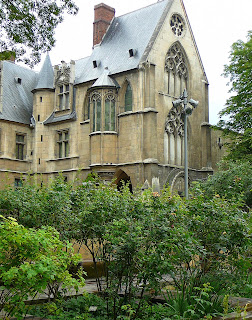 Tucked away in the Cluny Museum's medieval garden, it's inspired by the pleasure gardens of the Middle Ages. Trellis and lattice-work give privacy to lovers, and in summer thyme, camomile, roses and carnations perfume the air. The garden is inspired by the Cluny's star attraction, the mysterious Lady with the Unicorn tapestries. The museum itself is housed in a 15th-century Gothic mansion, which was in turn built over the ruins of ancient Roman baths. I first saw the garden shortly after it was created in 2000. Now it's had time to develop and mature, it's a magical place for a picnic lunch or romantic rendezvous.The Cluny  - also known as the National Museum of the Middle Ages (Musée National du Moyen Âge)  - is on the Left Bank, a short walk south from Notre Dame cathedral.
Closest Métro: Cluny-La Sorbonne
http://www.musee-moyenage.fr/
Posted by sandra at 10:25:00 No comments: 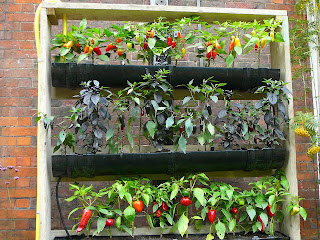 Last summer I was intrigued by vertical gardening schemes displayed at Prince Charles' London home, Clarence House. As part of the Prince's "Garden Party to Make a Difference", Tom Petherick, Adam Hunt and Lulu Urquhart used their imagination  to create structures for a Future Cities garden where plants could be grown in a restricted space. This frame (above) using simple materials was one of their suggestions. 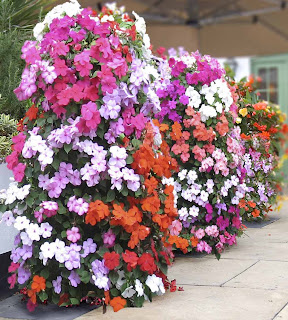 Fast forward to February, and it seems vertical gardening is a hot horticultural topic. Key companies in the industry have been unveiling their latest products to the media, and many are taking container gardening to new heights. 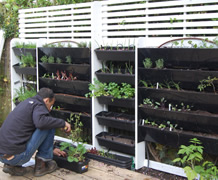 This edible wall with troughs for larger vegetables or cascading plants is part of perhaps the most sophisticated range I spotted  - Easiwall from Treebox. It also includes a vertical herb planter for the kitchen garden, and green screening for privacy and to hide eyesores.
http://www.treebox.co.uk/index.html.
﻿﻿﻿﻿﻿﻿﻿﻿﻿﻿﻿﻿﻿﻿﻿﻿﻿﻿﻿﻿﻿﻿﻿﻿﻿﻿

.Vertigro (left), a free-standing modular system devised by Claude Lester. Full-sized growbags are sandwiched between curved sheets of Aluzinc, and suspended from a 165 cm high frame, ready to be planted up with flowers, herbs, and vegetables. Claude says they're ideal for patios, terraces and balconies and retain water well. http://www.vertigro.co.uk/
.The MiniGarden, by EarthBox, which comes in sets of three modules, each with three planting pockets. These can be arranged horizontally, vertically, or even back-to-back to create a double-sided 'wall' of growing containers. (http://www.earthbox.co.uk/)

I'm sure these products were under development well before the Clarence House event, but remembering Prince Charles' early championing of organic gardening, you realise this is not the first time he's been at the forefront of new trends.
Posted by sandra at 23:39:00 No comments: