A rare chance to visit the garden of Spencer House 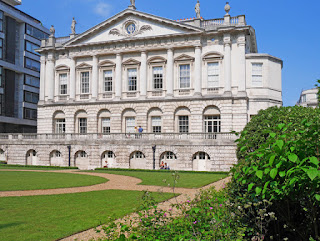 Spencer House – the private palace built by an ancestor of the late Princess Diana - recently opened its garden for the first time since 2011. It was for two days only, to celebrate the Year of the English Garden, but it is well worth keeping watch for future occasions. 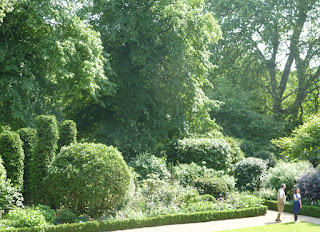 The garden backs on to Green Park, with just railings and a border of shrubs to provide privacy. It was originally designed in the 18th century by Henry Holland, son-in-law of Capability Brown, and was one of the largest gardens in the fashionable St James area of London. The Spencer family were at the very heart of society, mixing with royalty and politicians, and when the house was built, it was conceived as a classical temple dedicated to hospitality, love and the arts.  Statues of Bacchus, Flora and Ceres still grace the pediment of the garden facade (top). 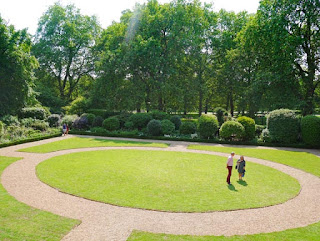 A recent restoration project has taken the garden back to what’s believed to be the original layout: a simple circular lawn surrounded by a path and densely-planted border. Frustratingly, records refer only to the money paid for plants - the species don’t warrant a mention, so Todd Longstaffe-Gowan, who advised on the restoration, has used shrubs and plants appropriate to the late eighteenth and early nineteenth centuries. 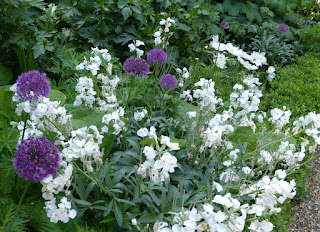 In early summer, the garden is a symphony of green, white and purple. Euphorbia, geraniums, wisteria, and jasmine mix with a sprinkling of cosmos, some striking echium pininana (below) and lots of roses. 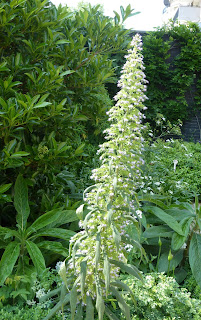 The garden was designed to be seen and admired by the many illustrious visitors to Spencer House, and the lavishly-decorated State Rooms provided them with a perfect viewing platform. The rooms are now open to the public on Sundays, so although there is currently no access to the lawn, today's visitors (on the hour-long guided tours) can look down through the windows and enjoy the lush planting. 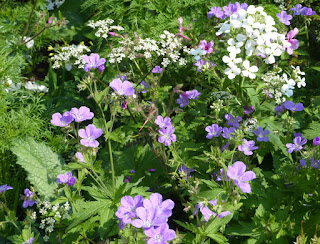 For bookings and admission prices, see http://www.spencerhouse.co.uk
More about garden designer Todd Longstaffe-Gowan at  http://www.tlg-landscape.co.uk/
Posted by sandra at 23:12:00 No comments: