The View from the Shard - and some alternatives

This week sees a new icon on the London skyline open its doors to the public for the first time. The View from the Shard - the visitor attraction at the tallest building in Western Europe – is, at 244 metres, twice the height of any other viewing platform in the capital and has 360’ views which can extend 40 miles or so on a clear day. You zoom up via two lifts to level 69, with its floor to ceiling windows, and if that's not high enough, there's an open air viewing platform on level 72. Keen photographers should note though that for safety reasons this is surrounded by glass walls and unless you have a tripod (or similar) to raise your camera above them, you will be shooting through the glass, Pre-booked tickets cost £24.95 for adults and £18.95 for children. To book, visit www.theviewfromtheshard.com


But the Shard’s not the only place for a view of London rooftops. 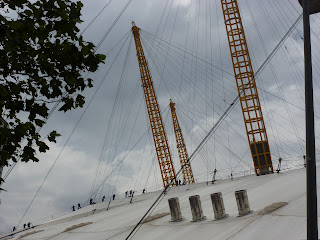 Up at the 02, on the Greenwich Peninsula, combines an outdoor challenge with a unique perspective. Visitors climb over the roof of the 02 (originally the Millennium Dome) via a tensile fabric walkway suspended 53 meters above ground level. An observation platform at the summit gives wide views of the city and its many landmarks, including the Olympic Park, Thames Barrier, The Shard, Greenwich and Canary Wharf. Tickets start at £22 for adults and children. To book, visit www.theo2.co.uk/upattheo2

One of the capital's most popular tourist attractions is the London Eye, the giant Ferris wheel just across the Thames from Buckingham Palace and the Houses of Parliament. It's 135 metres tall and has 32 sealed and air-conditioned cabins that revolve continuously, but so slowly you hardly know you’re moving. One ride lasts about half an hour. It’s been in operation since 2000. Online adult tickets start at £17.28. Details at http://www.londoneye.com/

The eyecatching red ArcelorMittal Orbit sculpture, a feature of the Olympic Park during the 2012 Games, is 115 metres tall and has two viewing platforms at 76 and 80 metres high. It was created by artist Anish Kapoor who used 560 metres of tubular steel to form the twisted lattice superstructure. During the Olympics tickets were £15 and it was climbed by 130,000 visitors, including the Queen and Prince Philip. It re-opens in 2013 as part of the park’s redevelopment. For more information, visit www.arcelormittalorbit.com 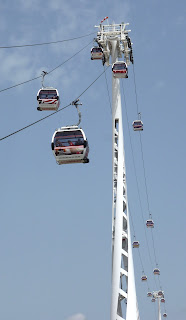 A much cheaper (but still exciting) option is the Emirates Air Line cablecar. This opened in 2012 and runs across the Thames from the Greenwich Peninsula to the Royal Docks on the north side. Each of the 34 cabins can hold 10 people, and accommodates wheelchairs and baby buggies. They run continuously, slowing right down at the terminals to allow passengers to board and alight, then swinging up and out over the river to reach a height of almost 100 metres. The operators, Transport for London, say up to 2,500 people an hour can be carried in each direction, though post-Olympics, it’s not running at anything like full capacity. Fares start at £3.20 for a single fare using an Oyster travel card/Freedom pass or £4.30 without. A ride lasts 5 – 10 mins. http://www.emiratesairline.co.uk/

Finally, for a spectacular view of the London skyline which is absolutely free, take the glass lift to the roof terrace of One New Change, the shopping centre to the east of St Paul's Cathedral.

A snowy wassail in north-west London 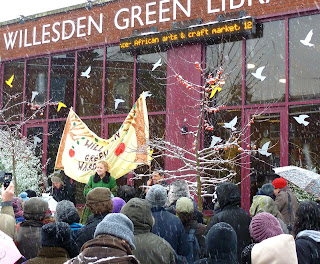 A warming moment on our snow-bound high street - dozens of people braving the freezing temperatures to take part in a wassail. This is an ancient custom held at the start of the year in orchards to bless the trees and make them fruitful, but storyteller Rachel Rose Reid (here addressing the crowd) has adapted it for the urban environment to show support for local businesses and bring neighbours together. 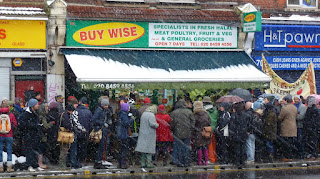 For the fourth year running, wassailers paraded along Willesden Green High Rd, stopping to wish independent shopkeepers all the best for the coming year with songs and poetry. 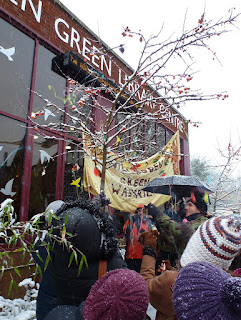 The event ended at the Library Centre, wassailing the crab apple trees planted there four years ago but sadly now under threat from a proposed redevelopment opposed by many residents. This would see Brent council give the site to developers who would demolish the 1986 library and build more than 90 luxury flats there, in return constructing a smaller library at the very front of the site. (Brent has already closed 6 of its 12 libraries.) If this goes ahead, the small open area which serves as a town square and where the wassail and other events take place would also be lost.
See http://keepwillesdengreen.blogspot.co.uk/
www.rachelrosereid.com/