A bird's-eye view of the Thames 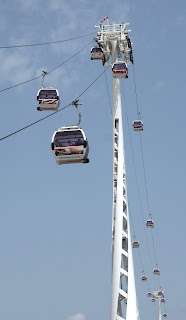 A big thumbs up for London’s first cable car service across the Thames, which has now opened for passengers. On its first day I joined several hundred people queuing in warm, sunny weather for the half-mile journey over the river, and was rewarded with (below) stunning views of the O2 arena, the Canary Wharf financial district, and the Olympic Park. 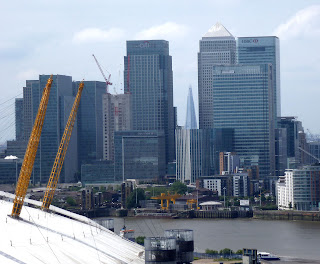 Even the Thames barrier, which protects the capital from flooding, was clearly visible. 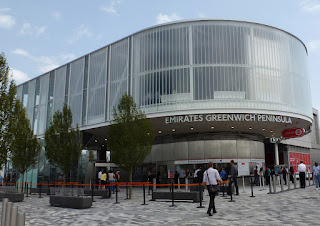 The Emirates Air Line, as it’s officially known, runs between terminals at North Greenwich (left) and the ExCel exhibition centre at the Royal Docks, both of which are hosting Olympic events. 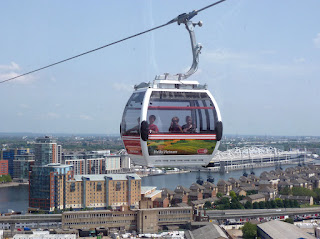 Each of the 34 cars can hold 10 people, and accommodates wheelchairs and baby buggies. They run continuously, slowing right down at the terminals to allow passengers to board and alight, then swinging up and out over the river to reach a height of almost 300 ft. The operators, Transport for London, say up to 2,500 people an hour can be carried in each direction.


Emirates has invested £36 million in the project as part of a 10-year sponsorship deal. This stretch of Thames is currently served by road tunnels, but no bridges, so the cable car is a useful link. London mayor Boris Johnson says the service is a tourist attraction but also a valuable addition to the capital's public transport infrastructure. 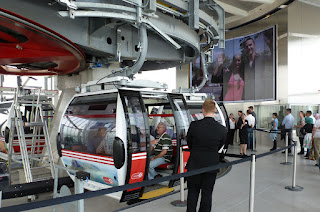 How heavy the demand will be for the journey after the Olympics remains to be seen. Fares start at £3.20 for a single fare using an Oyster travel card/Freedom pass or £4.30 without, and there is a ‘frequent flyer’ pass allowing 10 single journeys for £16. There were a few teething troubles with ticket-buying immediately after the opening, though these were hopefully short-lived. The journey takes between 5 and 10 minutes  (quickest at rushhour and slower from mid-morning to mid-afternoon.)  Some passengers have queried the cost, saying it’s too expensive for regular commuters. But there’s no doubt that everyone on the first day, young and old, was thrilled with the stunning views of London and the river that flows through its heart.

Inspiration for the gardens at the world’s largest flower show at Hampton Court Palace (July 3 - 8 2012) comes from many sources. One of this year’s spectacular creations takes as its theme the art treasures of the State Russian Museum of St Petersburg. Visitors will enter through a giant picture frame and walk under a chandelier.

The city is known as the Venice of the North, so the garden is partially bordered by a moat, with bridges and islands. Topiary cupolas reflect the St Petersburg skyline, and the unmistakable Russian theme is continued with a set of Russian doll sculptures. The garden is edged with rustic grasses to symbolise the weekend exodus by city inhabitants to their rural retreats or dachas.

The garden is the work of Heather Appleton of the English landscape design company, Twig. She went to St Petersburg last year, and says she was ‘wowed’ by the vibrancy and the variety of the art exhibits, which range from the 10th to the 21st centuries. She's hoping her creation will spur people to go there themselves. 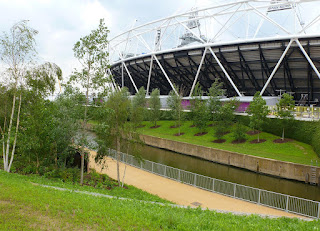 There's a treat in store for keen gardeners going to Olympic events at Stratford. Half a mile of riverbank between the aquatics centre and the stadium has been cleared of contamination, rubbish, railway sidings and Japanese knotweed and transformed into a garden celebrating the British love of plants. The design is the work of Chelsea gold medal winner Sarah Price.
“I really wanted to celebrate the introduction of plants into Great Britain in the last 500 years so it’s a timeline looking at plants that have come from Europe, then North America, the Southern hemisphere and Asia,” she says. “It’s densely planted, a bit like a meadow, and the plants are intermingled. There are also areas where it’s a simple composition with grasses against this mad tapestry. Part of our brief… was to create gardens suitable for a festival and colourful so it is about making sweeping statements. But it also has unity and relates to painted pictures. We wanted bold swathes of purple in a broad sweep.” 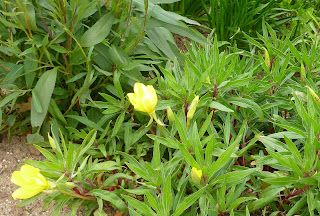 The gardens cover an area the size of 10 football fields, and contain more than 120,000 plants from 250 different species, nurtured to flower during the Olympics They will gradually move in colour from predominantly yellow (left), blue and silver in July to gold in August. 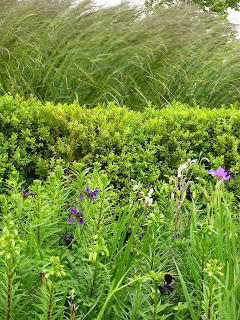 When I visited on June 14, (before a special BBC Radio 4 Gardeners’ Question Time programme), most of the flowers were still to emerge, but the thought that had gone into the planting was obvious. The Lea Valley is a windtunnel, so vegetation has been kept low, with box hedging providing some shelter (left). Grasses were bending in the wind, while spikes of allium, agapanthus, black iris, lillies, red hot poker, and Californian poppy added drama. 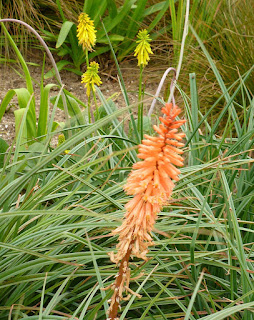 Working with Sarah on the wildflower meadows are Professor James Hitchmough and his colleague Nigel Dunnett from the University of Sheffield, and head gardener Des Smith. Professor Hitchmough makes the point that the days when local authorities had money for intensive garden maintenance are past. So the care of the meadow gardens is squeezed into a couple of weeks from the end of February, when the vegetation is cut down and flash-burnt to get rid of weeds, then reseeded with a special prairie mix. He says they trialled this in Sheffield Botanic Gardens in 2004, and today it's still more or less weed-free. 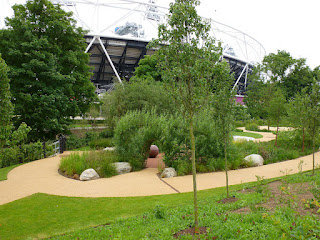 In a more sheltered area near the stadium is the Great British Garden, the work of RHS competition-winners Rachel Read and schoolgirl Hannah Clegg. Their design features Bronze, Silver and Gold areas with matching colours of wildflowers and grasses, running-track inspired spiral paths, a living tunnel of woven willow, an orchard, fruiting hedges and a frog pond with wetland plants. There’s also a 'de Coubertin oak', from an acorn collected from the tree that Baron Pierre De Coubertin planted in 1894 to thank the citizens of Much Wenlock in Shropshire for inspiring the founding of the modern Olympic Games. 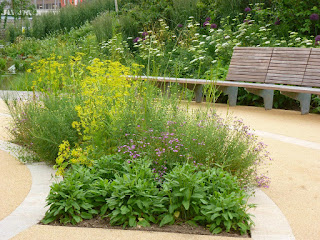 In years to come, this former industrial site will become a leafy oasis. Two and a half thousand trees, including alder, cherry, ash, hazel, willow, oak, poplar, rowan, lime, field maple, sweet gum and silver birch have already been planted and a similar number will be added next year.

One thoughtful touch: the parklands will have 250 benches and more than 3,300 seats, so there should always be a handy place to sit and enjoy the surroundings. 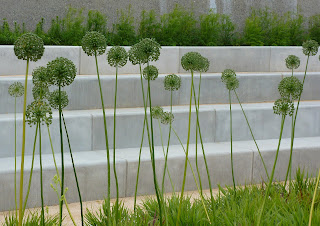 Planting notes on the world gardens: 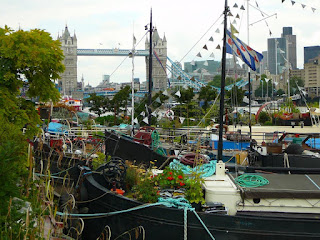 This weekend more than 200 squares and gardens, mostly private, open their gates so visitors can discover some of the capital’s beautiful hidden spaces. To me, the most remarkable is the Garden Barge Square at Tower Bridge Moorings, Downings Rd, Southwark, where gardens have been created on converted barges. 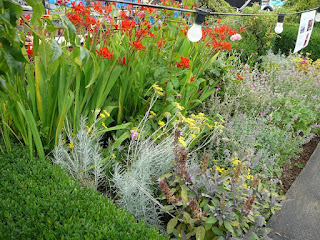 The planting is in huge metal trays on rooftops and decks and ranges from an apple tree to evergreen and silver-leafed plants such as lavender and stipa, which thrive despite the windy air of the . 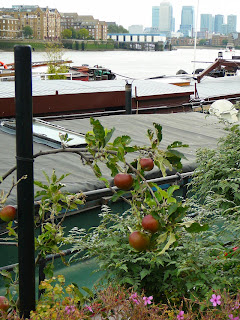 I took these photos when I visited last year, and was amazed by the care and imagination that has gone into the creation of these gardens. There was even an apple tree, though because of the shallow depth of the soil, it could never grow very tall. 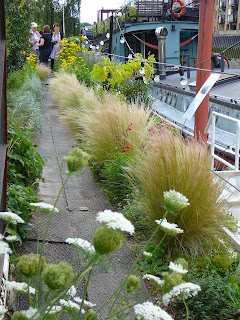 Even the walkways between the barges have been lined with plants. (The inspiration came from self-seeded wildflowers which sprang up on the barges back in the 1980s.) 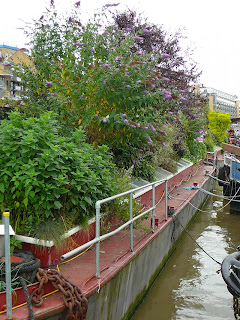 Today, this floating square is a haven for insects and birds, and shows how a garden can be created almost anywhere. 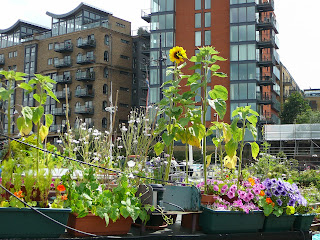 More about London squares: http://www.londongardenstrust.org/history/squares.htm
Posted by sandra at 12:24:00 No comments: