Can this orchid be saved? 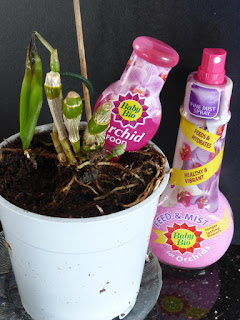 Last October I was given a beautiful Orchidaceae Dendrobium, which flowered profusely for weeks.  When the spike finally finished, I cut it off and watched in delight as another one appeared from the base. It reached about 10cm, then, while I was away for a few days (during which time the weather was extremely cold and the central heating was off at night) the single leaf turned black at the base and collapsed. (I cut it off immediately after taking the photo.)  Now what seems to be another spike has started to appear, and I'm anxious it doesn't share the same fate. I can't find any obvious cause apart from the temperature, and when I spoke to a very helpful Baby Bio representative she recommended some intensive tlc. So the dendrobium is being cosseted with a drip-feed bottle of Baby Bio Orchid food, and their new Feed and Mist, which covers the plant in an extremely fine spray. Fingers crossed this does the trick, and I will post an update.
Posted by sandra at 15:36:00 No comments:

Walking the Lea Valley 6: In the footsteps of Lawrence of Arabia? 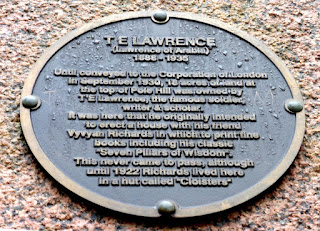 We were not expecting to come across T.E. Lawrence when we embarked on the latest leg of our Lea Valley walk - from Chingford to Enfield lock - on a grey February morning. The muddy tracks through Epping Forest were about as far from the scorching sands of Arabia as it is possible to get. But when we reached our first stop – the Meridian obelisk at the top of Pole Hill – there was a memorial plaque. It recalls how the 18 acres of surrounding land "...was once owned by T.E. Lawrence, the famous soldier, writer and scholar. It was here that he originally intended to erect a house with his friend Vyvyan Richards in which to print fine books including his classic 'Seven Pillars of Wisdom'. This never came to pass although until 1922, Richards lived here in a hut called Cloisters.”
Lawrence seems to have continued to consider settling there – in 1923 he wrote to a friend: “It’s my ambition to live there and read again.” In the end, though, he sold the property to the Conservators of Epping Forest for exactly what he had paid for it – £3,500. Cloisters was removed to the Conservators' Yard at Loughton, where it remains as a storeroom for forestry equipment. 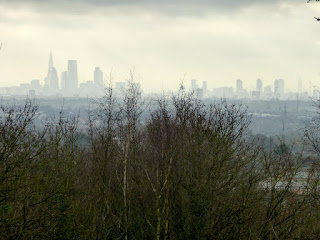 Today, the plaque is the only remaining sign of his occupation, and the view, which takes in City landmarks such as the Gherkin and the Shard, is altered beyond recognition. 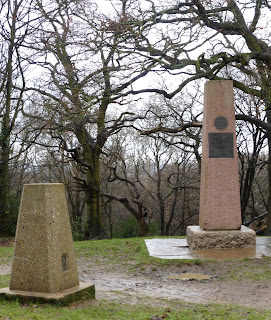 The obelisk itself is of pink granite, and was erected in 1824 on the Greenwich Meridian  "to indicate the direction of true north from the transit telescope of the Royal Observatory". The Greenwich Meridian was changed in 1850, which meant zero longitude now passes 19 feet to the east of the pillar, so a second, smaller one – in fact an Ordnance Survey trig point – now stands in the correct spot. The name, Pole Hill, has nothing to do with poles: the land once belonged to St Paul's Cathedral, and the name is a corruption of this. 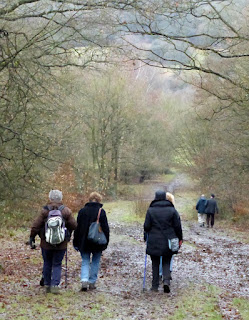 After this high point, the walk was a mixture of forest, farms and river valley. We slithered down the hill, picked our way through squelchy mud at the bottom, and then began climbing Yardley Hill. Suddenly the sun came out, and the morning was transformed. 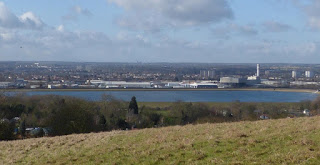 Looking west, we could see the reservoirs (hidden behind protective banks on our previous rambles along the Lea) and look across to Enfield and the suburbs beyond. At the crest of the hill, the path suddenly flattened out, and we found ourselves at Gilwell Park, the home of the Scout movement in the UK.  In the late Middle Ages, the area was a farm, then grew into a wealthy estate. It later fell into disrepair and was bought in 1919 to provide camping for London Scouts and training for Scouters. Today the amenities include a swimming pool, rifle range, climbing wall, zip wire, archery field and a sensory trail. There’s also a canoeing lake, formed out of a bomb crater created in a WW2 air raid. 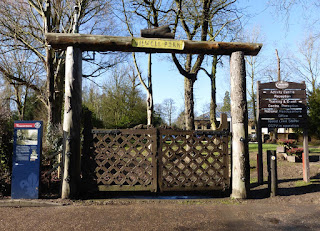 The imposing gates were carved in 1927 by Don Potter, who had joined the scouts as a Wolf Cub and later became the first leader of the 1st Gilwell Park Troop. The Gilwell symbol of an axe and log sits on the top of the gates, with crouching leopards below.

Our route then took us along Daws Hill, where some snowdrops were peeking up through the fallen leaves beside the road. 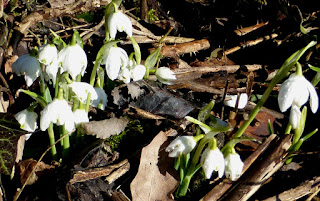 At the bottom we turned right and headed north along Sewardstone Rd, which runs parallel to the Lea. The name derives from Seward’s ton (farmstead) and there’s a possibility there was an Iron Age settlement here – in the 19th century, when the reservoirs were being constructed, the remains of a dugout oak canoe, knives and arrowheads were found. Today, the area is home to a string of horticultural nurseries and farms.

Though some former farm buildings have been become desirable residential properties, the area is still rural enough for motorists to queue patiently behind a pony and exercise cart. 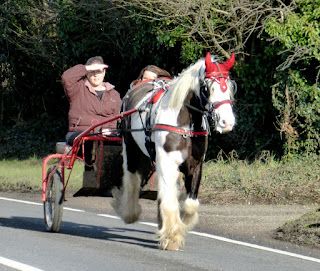 A very welcome lunch awaited us at the Plough, which we were delighted to discover has been a McMullen pub since 1917 – we has seen the McMullen’s brewery in Hertford on an earlier walk. 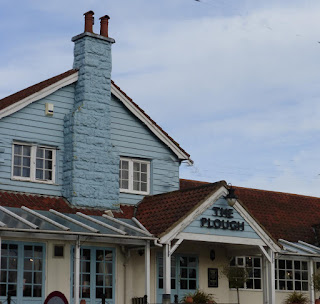 Then it was off to the Sewardstone Marsh nature reserve where a flock of Canada geese were braving the water. 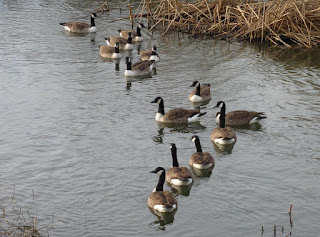 More ponies, shaggy in their winter coats, were peacefully grazing nearby. 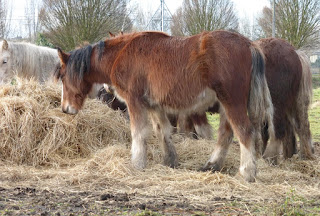 The path meandered through the marsh, past the Swan and Pike pool, and eventually joined the Lea Navigation. 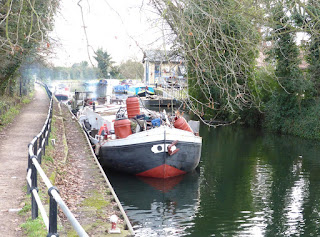 Then we reached the main road, and made a dash for the bus that would take us and our muddy boots to the train station at Enfield Lock. As we boarded, I just managed to snatch a photo of the Victorian cottages – once built for workers at the former Royal Small Arms Factory – that line the waterway there. 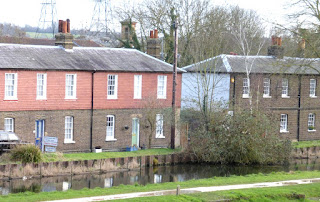