Waddesdon Manor lights up for Christmas

Until now my visits to Waddesdon Manor, near Aylesbury in Buckinghamshire, have been in the summer. So it was a delightful surprise on a grey November afternoon to discover the house and grounds dressed for Christmas. As dusk fell, the ornate facade was illuminated with a light and sound show, a rainbow of lights keeping time with music from hidden speakers. 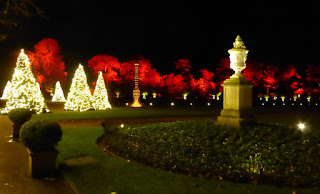 Throughout the grounds, trees were lit by spotlights. 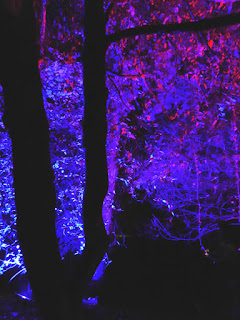 Beyond the Aviary was the dramatic installation of Bruce Munro’s Field of Light. Nine thousand glowing glass spheres carpeted the grass, transforming the glade into a magical wonderland that stretches on and on. If you follow the dimly-lit path you can walk right round it, marvelling as the globes wink on and off and change colour. (The route is reasonably flat, but a torch might be useful.) 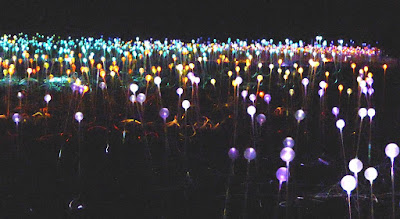 Indoors, the theme for the decorations is Magical Materials, inspired by the rare and beautiful objects in Waddesdon’s collections. 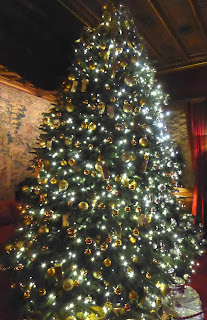 Even this bathroom had been transformed into an underwater paradise. 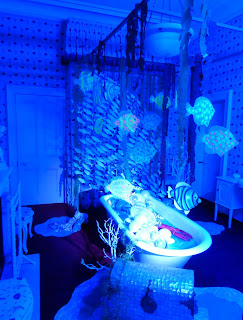 Among the more conventional trees was one crafted from exquisite hand-made paper flowers. 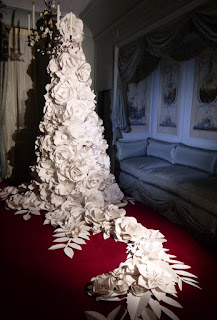 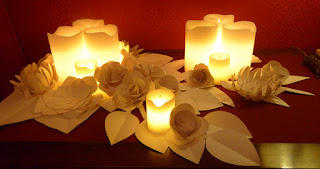 Corridors were transformed as well. One was veiled in white lace, while here, tree decorations continued the Christmas theme.. 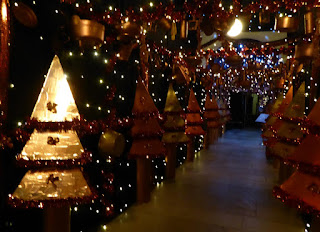 Christmas at Waddesdon runs until January 2, with the last entry at 5.30 pm. Traditional Christmas food is served in the restaurant until 6pm, with seasonal snacks in the Wigwam cafe. From November 16 to December 11 there is a Christmas Fair with festive foods from local producers and independent traders, and of course, the Manor shop is open for gifts and souvenirs. For tickets and details see
https://www.nationaltrust.org.uk/waddesdon-manor/features/christmas-at-waddesdon-manor 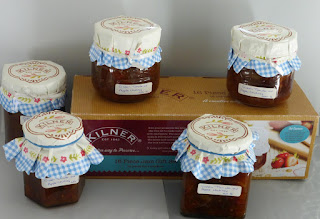 What to do with the green tomatoes that remained from a great crop this summer? Inspired by a birthday present of a Kilner preserving set, I’ve turned them and a few remaining apples into some chutney that hopefully will spice up the coming winter months. For the first time, I used a pressure cooker, with a recipe from the internet. It will be a few weeks before the results can be properly appreciated, but a quick sample tasted promising. The recipe specified cooking apples, but as I grow only eating ones, I cut down the amount of sugar used by 40g. The tomatoes weren't skinned - too difficult, even after immersing in boiling water.
.
Green Tomato and Apple Chutney
340g onions
450g cooking apples (weight after peeling)
450g green tomatoes
280 brown or malt vinegar
1/2 tsp salt
1-2 tsp mixed pickling spice
240g sugar (white or brown)
170 - 225g sultanas

1. Peel onions and apples, skin the tomatoes (optional).
2 Chop vegetables and fruit and put in presssure cooker.
3 Add vinegar, salt and pickling spice tied in muslin.
4.Close and bring to H/15lb pressure.
5.Cook for 10 mins.
6.Remove cover, add sugar and dried fruit and stir over low heat until sugar dissolved. Remove bag of spice.
7.Boil in open pan until it turns into a thick puree.
8.Spoon into hot jars and cover.
Posted by sandra at 12:58:00 No comments:

Walking the Lea Valley 3: Bromley by Bow to Stratford 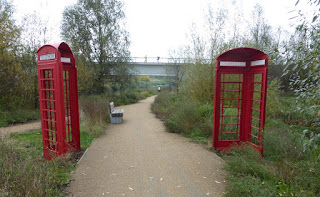 A red telephone box, cut in two, straddles a path in the Olympic Park by the River Lea. Look carefully and you’ll see an inscription that runs around the glass panes:
“Before you are spread the arteries of Victorian London. Once busy with boats, by 2005 these were polluted and largely disused. London 2012 unclogged them of 34,144 tonnes of rubbish and brought them back to life.”
And that was really the theme of this month’s Lea Valley walk, although the arteries we discovered were also serving London back in Saxon times. We started at Bromley by Bow on a misty November morning, and once past the roaring traffic on the A102, turned right, and crossed a bridge which spans both the Limehouse Cut and the Lea, running parallel at this point. 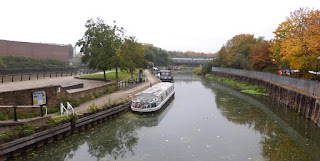 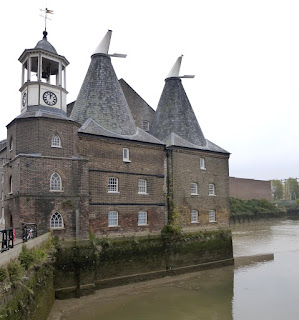 The picturesque Clock Mill (above) dates from 1817. Opposite is the House Mill, said to be the largest tidal mill in the country, and perhaps the world (tours on Sundays from May to October). Peering through the windows we could just see the huge water wheel, driven by high-tide water that was trapped behind a sluice and then released to drive it. 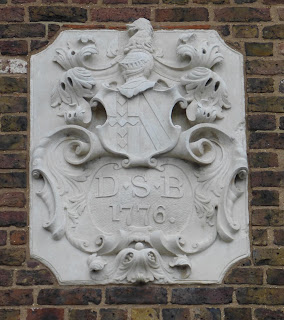 On the wall is a coat of arms - probably put there by Daniel and Sarah Bisson when they built it in 1776. The third mill, a windmill, survived until 1840. The whole site is now a conservation area with cobbled streets, and home to London’s largest film and television studios. The path then led us round to the new Three Mills Green, the first of a series of planned park spaces that will connect the Olympic Park to the north with the Thames to the south. It’s on the banks of the Three Mills Wall River, where a huge amount of regeneration and redevelopment is going on. 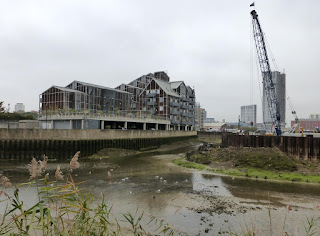 In the distance to the east you can just glimpse the ornate roof of the Abbey Mills Pumping Station (1865 – 8). This Gothic masterpiece was the work of Joseph Bazalgette, chief engineer for the Metropolitan Board of Works, who created a network of sewers under London which was instrumental in relieving the city of cholera and began the cleansing of the Thames. It was designed to lift lower level sewage into the outfall and still operates as a backup for the new pumping station nearby. 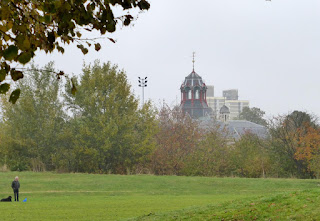 We paused at a memorial sculpture with a dedication to four men who “lost their lives in a well beneath this spot on 12 July 1901.” It’s a tragic story of self-sacrifice. A working party had set out to investigate the well, which had been sealed off for ten years. The first to descend, Thomas Picket, was overcome by “foul air” – carbon dioxide –  apparently caused by rotting weeds in the remaining water. The three who successively tried to effect a rescue also succumbed, and by the time the Fire Brigade arrived, it was too late. 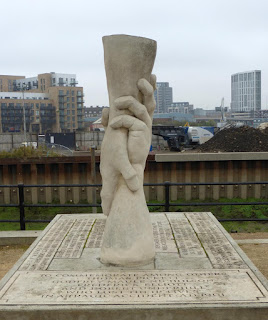 Among those who died was Godfrey Maule Nicholson, Managing Director of the Nicholson Gin Distillery, the then owner of the Three Mills site and part of the famous gin family whose name still adorns many of the pubs around London today. The cross erected to mark the spot was replaced in 2001, the centenary of the tragedy, by the new ‘Helping Hands’ sculpture.We retraced our steps back to the Lea, and walked along the towpath, under the A11. 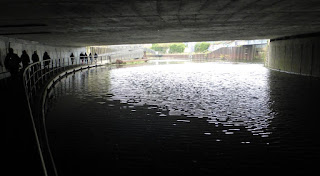 Just past here the Lea is joined by the Bow Back River – now overlooked by shiny new high-rise developments. 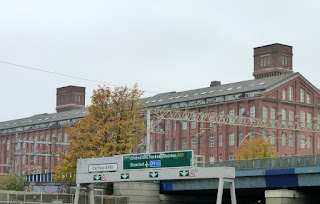 Here there’s a glimpse of the former Bryant and May match factory, the scene of the London matchgirls strike of 1888, prompted by the terrible working conditions. This led to the first British trade union for women. The red-brick building is now a gated community, the Bow Quarter. 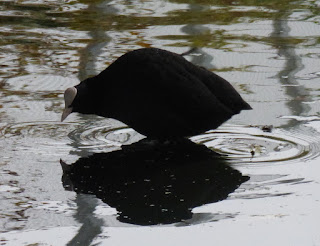 Now the river is clear of rubbish and pollutants, a number of birds have made it their home, among them this coot, poised above its watery reflection. Quite a few canal boats are moored here, some decorated... 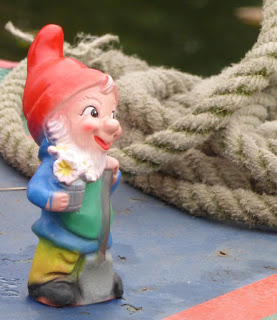 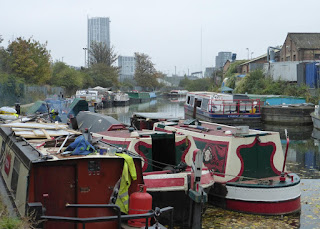 They have to pass through Old Ford Lock, first built in 1769 and upgraded and improved in succeeding years. 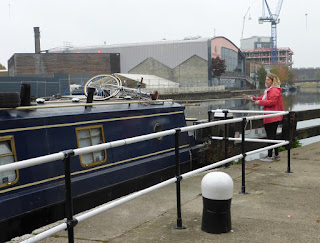 Old Ford was the site of a Roman crossing. It’s likely this was a bridge - forty timber piles were found in excavations at Dace Rd, close to the famous Formans smoked salmon headquarters and restaurant on the western river bank. 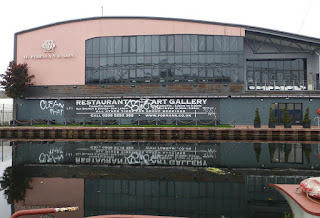 There’s another bit of history here: the company was founded more than 100 years ago by Harry Forman, who arrived in London from Russia and used his skill in smoking fish to start a family business, producing what is arguably the finest smoked salmon in the country, the London Cure. The factory was previously on the opposite side of the Lea, but had to relocate, along with 283 other businesses, when the site was chosen to house the 2012 Olympics. The new factory (above) dates from 2009 – its shape resembles a darne of salmon. 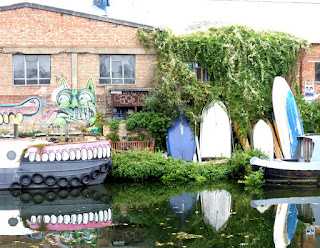 There’s quite a lot of imaginative graffiti along this stretch of the Lea, which now splits again into the river and the Lea Navigation, which here becomes the Hackney Cut. We followed the latter around the outskirts of the Olympic Park and caught a glimpse of the Hertford Union Canal (below), branching off to the west. 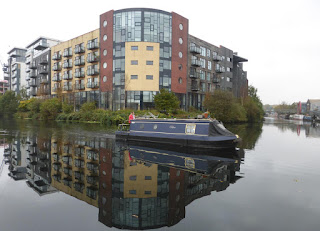 Lunch was in one of the many riverside restaurants, after which we headed south-east through the Queen Elizabeth Park to Stratford City and a train home. Leafy paths criss-cross the area, one of which took us past the deconstructed phone box (top) and its paean to the transformation of the area. 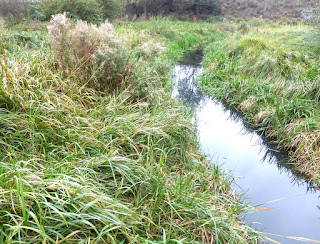 Nearby was  another example of what has been achieved – a rare ‘wet woodland’ on a former industrial site (above). By creating hollows and channels to encourage the land to become boggy and wet and planting black poplars and alders, it’s become a haven for plants and wildlife. There are fish, insects, kingfishers, goldfinches – and even perhaps, one day, otters. We'll have to return for them. 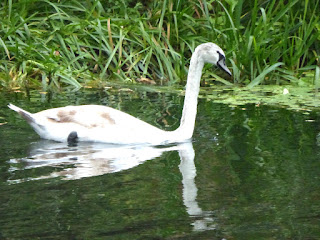