Surprises along the River Brent 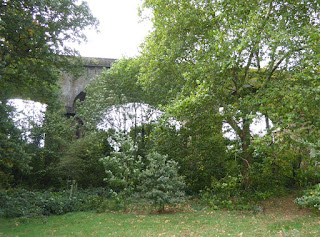 A meander along the River Brent in west London on a rather overcast autumn day took us from Hanwell to Perivale – and revealed some unexpected sights. The first, on leaving Hanwell station, was the towering edifice of the  Wharncliffe Viaduct. Designed by Isambard Kingdom Brunel and built in 1837, it was used by the Great Western Railway to carry the trains from London to Bristol across the Brent Valley. 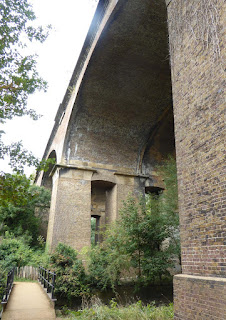 The huge semi-elliptical arches each span 21 metres.The two endmost are actually hollow, and home to what is thought to be London’s largest colony of Pipistrelle and Daubenton’s bats. The viaduct also carried the world’s first commercial electrical telegraph, which came into use on April 9, 1839. This gained much publicity when it was used to alert the police in London that a murder suspect in Slough had caught the train, leading to the first arrest due to electric communications. 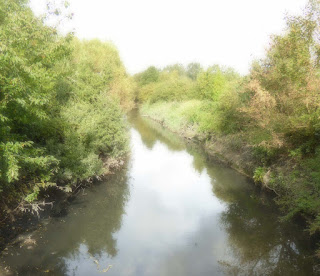 The Brent flows beside the viaduct for some distance. Nearby is an area of woodland, Hobbayne Half Acre Field. This is part of land gifted by a Hanwell yeoman in 1484 to be used for the poor and needy of the parish. Since then, the Charity of William Hobbayne has been making a difference to the local community; in 2016 a partnership was formed between it and Trees for Cities, a charity working to green cities and plant trees worldwide. 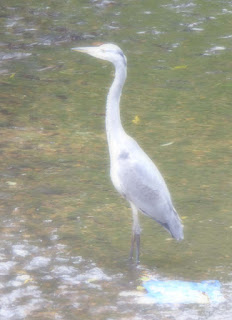 Now a range of waterside habitats have been installed along the Brent in the hope of increasing the numbers of water voles in the area. These were once widespread, but their numbers have declined over the past century because of water pollution and loss of habitat. Kingfishers and herons have also been spotted by the river - we were lucky enough to spot this one. 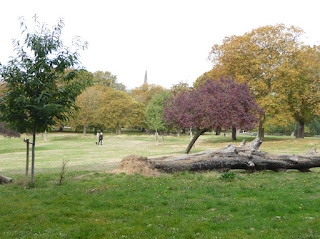 Looking to the north you can catch a glimpse of the spire of the parish church of St Mary’s, Hanwell. Built in 1841, it’s one of the very early churches designed by George Gilbert Scott (later the architect of the Albert Memorial). The park that leads up to it, Churchfields, was once agricultural land that belonged to the church. In 1902 it became a formal park, and today has avenues of trees, a children’s playground and tennis courts. A colourful touch was this river of flowers that weaves its way through the wide expanse of grass. 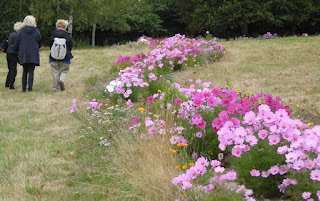 Another highlight was in Brent Lodge Park - the Millennium Maze. It was created on the site of an old bowling green, using 2000 young yews, and demonstrates just how slowly these trees grow. At the moment only the smallest child would have trouble finding a way through, so it has a long way to go before it rivals the famous one at Hampton Court. 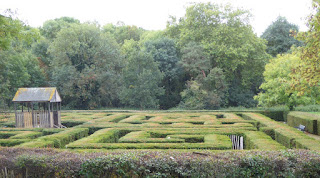 We followed the Brent through some quite dense woodland, spotting dog walkers, golf enthusiasts heading for the local club, and some ducks having a rest while dabbling their feet in the  river. 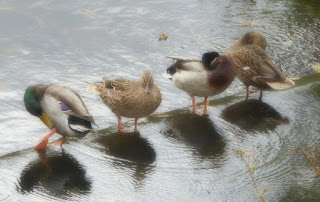 After a short cut along the Western Avenue, we reached our final destination, St Mary’s Perivale, a tiny, beautiful 12th or 13th  century church that, separated from its parish by the development and heavy traffic on the A40, became redundant in 1972. It was rescued from dereliction by the Friends of St Mary’s Perivale and transformed into an exceptional music venue serving west London. 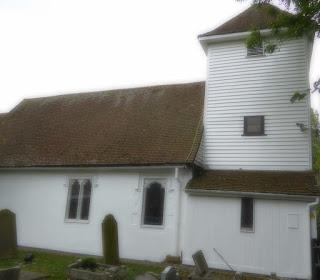 The church itself is unusual, with a tower clad in white weatherboarding. It’s normally closed, but we arrived as preparations were being made for one of the regular Tuesday lunchtime concerts. These are free, with a retiring collection, and no tickets are issued, so you can just turn up. 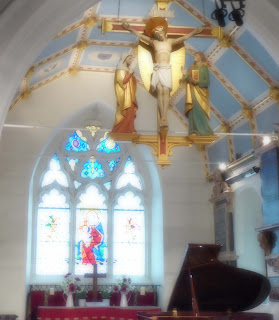 A quick peep inside revealed a Tudor font and memorial stones and brasses to distinguished former residents, many of whom had lost their lives in farflung parts of what was the British Empire. Among the many graves in the churchyard is that of Elizabeth Colleton, who died in 1721. Although it’s known as the Maiden’s Tomb, she was in fact the widow of a Cornish baronet and subsequently the mistress of Richard Savage, the Earl Rivers. He left his fortune to her, rather than his wife and daughter. She (or in another version of the legend, her father) is reputed to have said that, if there was a just God, trees would grow out of her tomb, and this is what actually happened. By the late 1800s these had caused the chest tomb to collapse, but it was rebuilt in 1999 by architect Adrian Cave. 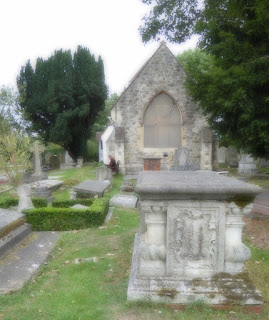 Today, the space around it has been cleared (above) and the detailed carving on the tomb is revealed once more. It's a peaceful spot, a world away from the A40 with its never-ceasisng stream of traffic, and Perivale Tube on the Central line,  just a few minutes to the north. Well worth a visit..
Posted by sandra at 13:19:00 No comments: